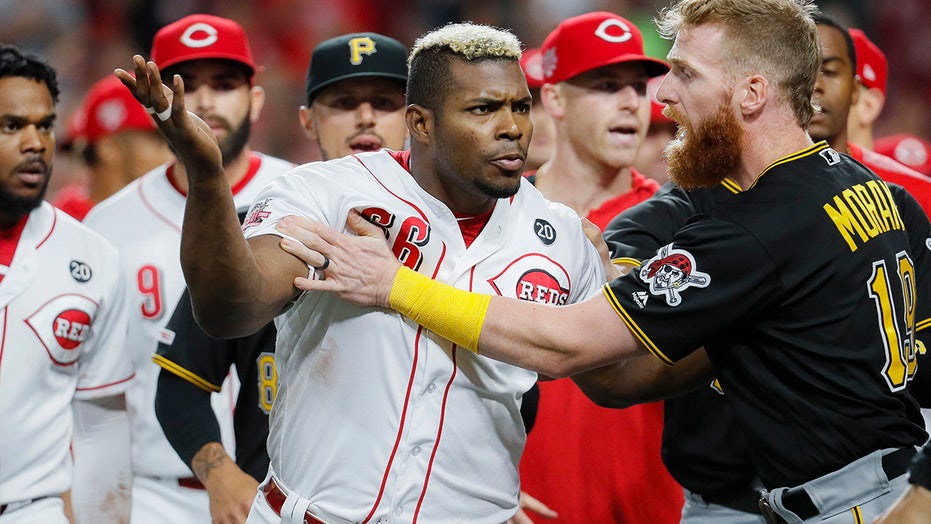 The dugout-clearing brawl between the Pittsburgh Pirates and Cincinnati Reds in the ninth inning of Tuesday night’s game resulted in multiple-game suspensions for eight people involved.

Three players on each team were suspended, and all elected to appeal. They will be allowed to play until the process is complete.

YASIEL PUIG, TRADED TO INDIANS, GETS IN BRAWL IN FINAL GAME WITH REDS

Pirates pitcher Keone Kela, who threw near Derek Dietrich’s head in the late innings, received the toughest suspension with 10 games, while wild-swinging Cincinnati reliever Amir Garrett – who appeared to challenge the entire team from the mound – was suspended for eight games.

Yasiel Puig, who was traded to Cleveland in the middle of the game, was suspended for three games for his aggressive actions.

“Things happen in the moment. You need to defend your teammates,” he told reporters. “Off the field, we’re all friends.”

The NL Central rivals have a history of run-ins that included a fracas in April at PNC Park that began after Dietrich stood at the plate to admire a home run — the Pirates have thrown close to him since then.

"This comes down to, really, one of our guys, the ball was thrown at his head. What were we supposed to do? If we don't, I can't live without doing anything to protect one of our guys. It's that simple," Bell said.

"If we don't do anything, if we don't protect ourselves, then their pitcher just gets away with throwing at one of our guy's head," he said.

All of the suspended players were fined undisclosed amounts. Pirates pitcher Trevor Williams, Reds first baseman Joey Votto and Reds outfielder Phillip Ervin also were fined, as were several players on both teams for taking part in the brawl while on the injured list.

The Reds and Pirates next play on Aug. 23 at Pittsburgh — that game, incidentally, was already billed as fireworks night.