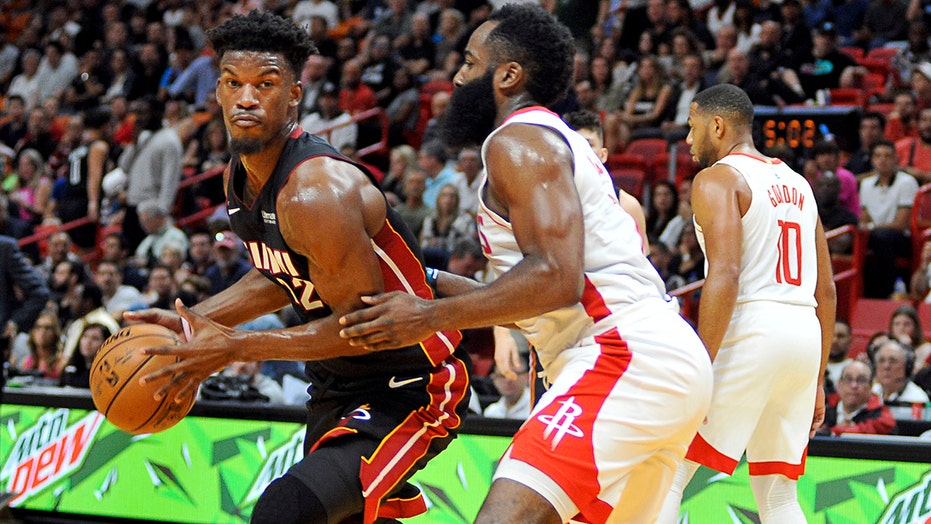 Miami Heat star Jimmy Butler hit back at his critics Monday and was asked about an apparent incident that took place behind the scenes during his short stint with the Philadelphia 76ers last season.

Butler, who agreed to a four-year, $142 million contract in a sign-and-trade deal with the Heat over the summer, took issue with those criticizing him for taking the deal and going to Miami instead of joining a more established team to become a No. 2 star instead of the main player.

ZION WILLIAMSON 'HAS TO GET HIS WEIGHT UNDER CONTROL,' FORMER NBA CHAMPION SAYS

“Motherf----rs act like I'm not a good basketball player,” Butler told Yahoo Sports on Monday. “Like for real. Just think about that. Like I can't come in and make a huge difference. I'm not going to say 'carry a team' because nobody can do it by themselves and I mean that. I'm not putting it all on myself, but I know what I'm capable of. I know what I bring to any and all situations, and the group of guys that we have is the group of guys that I want to play with.”

Butler added: “When I look down the line, and as we're talking about it as an organization on this roster, I know what these guys are capable of. These guys are built like me. We're one and the same, and so they're only going to get better and they're not going to get complacent. This is me. I see myself in every one of these guys around this locker room.”

Butler then touched on his departure from the 76ers.

“Stuff just don't work out,” he said. “Nobody knows what really went on in Philly, and we're going to leave it that way. But it was a great opportunity for me ... All of that will come out whenever it's time. Right now is not the time.

Miami Heat forward Jimmy Butler (22) reacts after scoring during the first half of the team's NBA basketball game against the Atlanta Hawks, Tuesday, Oct. 29, 2019, in Miami. (AP Photo/Lynne Sladky)

“I'm locked in with this. I'm happy, man. I'm smiling and my guys want me to be here, my organization wants me to be here, I want to be here and we're going to ride this thing until the wheels fall off.”

Butler’s emergence with the Heat has quickly put Miami back into contention in the Eastern Conference. Through three games, he’s averaging 14.7 points, 7 rebounds, 7.3 assists and 4.3 steals per game.