Senator Susan Collins has been targeted by liberal activist after she pledged to vote to confirm Brett Kavanaugh to the Supreme Court.

But then, Collins said, "When [Kavanaugh] came back with a forceful denial, the anger and anguish he showed, and then the lack of corroboration, led me back to the fundamental issues to our legal system."

Both Ford and Kavanaugh testified at length in late September before the Senate Judiciary Committee. Ford alleged that Kavanaugh sexually assaulted her more than three decades ago, and Kavanaugh, at times emotional and fiery, sharply denied the claim. President Trump and top White House officials had reportedly urged Kavanaugh to come out swinging at the hearing.

Speaking to CNN's "State of the Union" on Sunday, Collins emphasized, "I found Ford to be heart-wrenching and compelling." But, she continued, citing the lack of any witness corroboration for Ford's account, "I don't believe Kavanaugh was her assailant." (Also speaking to CNN on Sunday, Hawaii Democratic Sen. Mazie Horono, who has previously suggested Kavanaugh did not deserve due process, called Collins' comments "insulting" to Ford.)

Polls in Maine showed that a majority of Collins' constituents wanted her to reject Kavanaugh. Instead, he was confirmed Saturday by a narrow 50-48 margin. Collins' speech immediately prompted West Virginia Democratic Sen. Joe Manchin to announce his support for Kavanaugh as well, securing his confirmation. 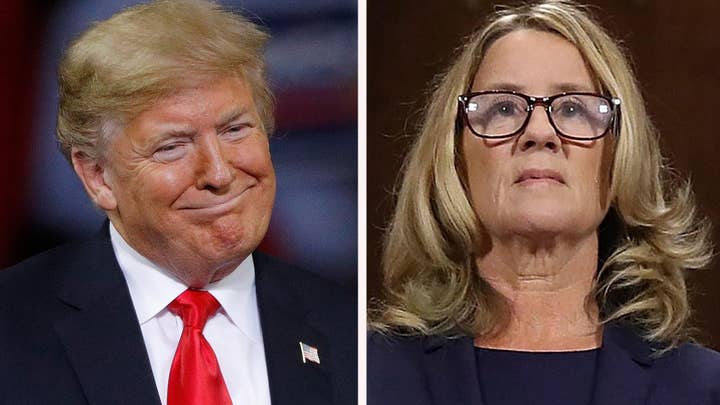 Collins spent more than an hour and a half in a secure room of the Capitol complex last week reviewing the FBI's supplemental background check on Kavanaugh, which she called a "very thorough" investigation.

In a point-by-point address on the Senate floor Friday afternoon, Collins spent nearly an hour reviewing Kavanaugh's judicial record, which she said showed he would be a fair jurist who respected precedent, including Roe v. Wade, which established a federal constitutional right to an abortion in early trimesters.

She then turned to the accusations against Kavanaugh, and said some of the outlandish claims against him -- including uncorroborated claims by Julie Swetnick that he had engaged in systemic gang rapes -- were a "stark reminder of why the presumption of innocence is so ingrained in our American consciousness." Trump called Collins' speech "beautiful" and "impassioned."

Swetinck's credibility has taken a beating in recent weeks, with two ex-boyfriends saying they doubt her story and other documents surfacing showing that a former employer accused her of concocting false sexual harassment claims.

Collins further slammed the individual who leaked Ford's confidential letter to Senate Democrats - a letter Ford sent in July but surfaced in a leak just days before a crucial Judiciary Committee vote on Kavanaugh's confirmation.

Additionally, Collins told CNN that while she found Kavanaugh persuasive, she felt he was at times too combative.

"I did believe that he should not have taken the shot at the Clintons," Collins said, referring to a line in Kavanaugh's opening statement saying that political operatives were trying to take him down on behalf of the Clintons. "And that in his questioning with certain senators, responding to their questions, particularly [Minnesota Democratic Sen.] Amy Klobuchar, that he stepped over the line."

Kavanaugh sparred awkwardly with Klobuchar during the September hearing, at one point asking her repeatedly if she had ever gotten so drunk that she had blacked out after she inquired the same of him. Kavanaugh later apologized.

Speaking separately to CBS, Collins dismissed concerns that Kavanaugh would try to exact revenge on Democrats now that he's on the Supreme Court. She noted that Senate Democrats had stalled Kavanaugh's confirmation to the D.C. Circuit Court of Appeals for two years until 2006, and that despite the delay, he had a fair judicial record that included tough rulings against the Bush administration.

Collins has faced harsh blowback already for her vote. Within hours of her Friday speech, one crowdfunding website, Crowdpac, said that it had crashed from the influx of donations intended to help Collins' eventual challenger. By Saturday afternoon, more than $3.2 million had been raised for "her opponent's campaign, once that opponent has been identified."

According to fundraising data from OpenSecrets.org, that number nearly matches the total amount raised this year by Maine's junior senator, Angus King, in his reelection bid.

And Susan Rice, the former national security adviser to President Barack Obama who was a central figure in the Benghazi uproar, responded "me" on Friday to a post asking who could challenge Collins when she is up for re-election in 2020. She also retweeted a post slamming Collins' speech as a "paean to disingenuousness and incoherence."

But on Sunday, Collins downplayed any potential challenge from Rice.

"As far as Susan Rice is concerned, her family has a home in Maine, but she doesn’t live in the state of Maine," Collins said. "Everybody knows that."