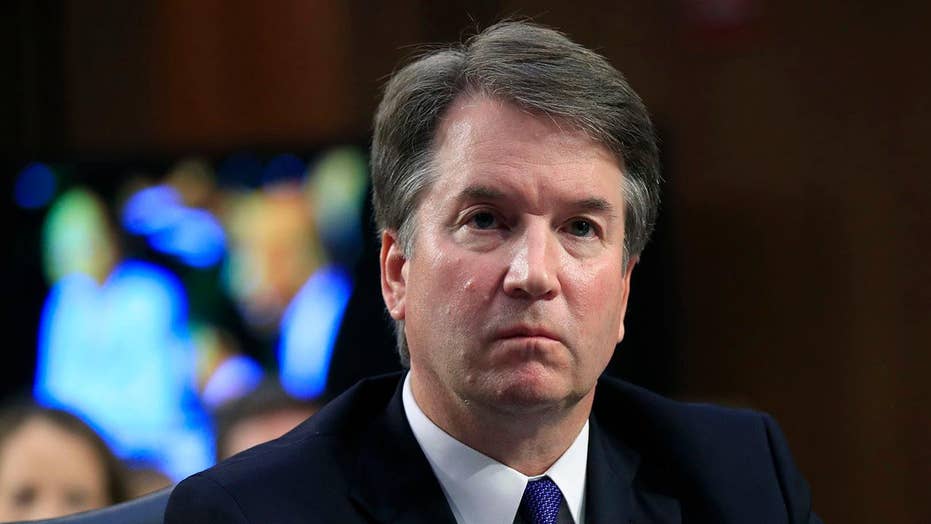 FBI report on Kavanaugh could be finished tomorrow

'The Story' exclusive: Woman who worked on Kavanaugh investigations provides insight into the background checks.

In a written declaration released Tuesday and obtained by Fox News, an ex-boyfriend of Christine Blasey Ford, the California professor accusing Brett Kavanaugh of sexual assault, directly contradicts her testimony under oath last week that she had never helped anyone prepare for a polygraph examination.

The former boyfriend, whose name was redacted in the declaration, also said Ford neither mentioned Kavanaugh nor mentioned she was a victim of sexual misconduct during the time they were dating from about 1992 to 1998. He said he saw Ford going to great lengths to help a woman he believed was her "life-long best friend" prepare for a potential polygraph test. He added that the woman, Monica McLean, had been interviewing for jobs with the FBI and U.S. Attorney's office.

He further claimed that Ford never voiced any fear of flying (even while aboard a propeller plane) and seemingly had no problem living in a "very small," 500 sq. ft. apartment with one door -- apparently contradicting her claims that she could not testify promptly in D.C. because she felt uncomfortable traveling on planes, as well as her suggestion that her memories of Kavanuagh's alleged assault prompted her to feel unsafe living in a closed space or one without a second front door.

Ford "never expressed a fear of closed quarters, tight spaces, or places with only one exit," the former boyfriend wrote.

However, on Thursday, Ford testified, "I was hoping to avoid getting on an airplane. But I eventually was able to get up the gumption with the help of some friends and get on the plane." She also acknowledged regularly -- and, in her words, "unfortunately" -- traveling on planes for work and hobbies.

And Ford explicitly told Sen. Dianne Feinstein, D-Calif., on Thursday that she had a second front door installed in her home because of "anxiety, phobia and PTSD-like symptoms" that she purportedly suffered in the wake of Kavanaugh's alleged attack at a house party in the 1980s -- "more especially, claustrophobia, panic and that type of thing."

In a pointed, no-holds-barred letter Tuesday evening that referenced the ex-boyfriend's declaration, Senate Judiciary Committee Chairman Chuck Grassley demanded that attorneys for Ford turn over her therapist notes and other key materials, and suggested she was intentionally less than truthful about her experience with polygraph examinations during Thursday's dramatic Senate hearing.

"Your continued withholding of material evidence despite multiple requests is unacceptable as the Senate exercises its constitutional responsibility of advice and consent for a judicial nomination," Grassley, R-Iowa, wrote.

Under questioning from experienced sex-crimes prosecutor Rachel Mitchell last week, Ford said that she had "never" had "any discussions with anyone ... on how to take a polygraph" or "given any tips or advice to anyone who was looking to take a polygraph test." She repeatedly said the process of taking her own polygraph in August was stressful and uncomfortable, although she testified she could not remember if she took the test on the same day as her grandmother's funeral, or the next day.

But in his declaration, the ex-boyfriend wrote that, "I witnessed Dr. Ford help [Monica L.] McLean prepare for a potential polygraph exam" and that Ford had "explained in detail what to expect, how polygraphs worked and helped [her] become familiar and less nervous about the exam," using her background in psychology. (McLean's name appeared on a list of Ford's former high school classmates who signed a letter of support for Ford last month).

Mitchell, in a report Sunday, said Ford's case was even weaker than the typical "He said, she said" situation and pointed out numerous discrepencies in her version of events that have emerged in the past several weeks, concerning everything from how many people were at the purported party to when it occurred and how she found her way home. Mitchell also noted that none of the witnesses Ford identified as having attended the party could back up her version of events.

Some of the apparent inconsistencies, Grassley wrote, could possibly be addressed if Ford's legal team turned over all video or audio recordings produced during her own polygraph examination. Ford passed that polygraph, and in a handwritten statement she wrote prior to the test, she indicated "there were 4 boys and a couple of girls" at the gathering.

FORD'S POLYGRAPH RESULTS SHOW KEY INCONSISTENCY -- HOW MANY PEOPLE WERE AT THE PARTY?

However, in Ford's letter to Feinstein in July, she gave a different tally, writing instead that the party "included me and 4 others." Under oath on Thursday, Ford for the first time mentioned that a fourth boy was at the party, but that she could not remember his name.

Grassley also demanded Ford's attorneys hand over notes from her 2012 therapy sessions in which she claimed to have discussed her alleged sexual assault decades ago. The senator said it was "not justified" any longer for Ford to cite privacy and medical privilege given that she has relied on them extensively as a kind of corroborating evidence to implicate Kavanaugh.

On Thursday, Ford claimed she could not say definitively whether she had shared those notes with The Washington Post approximately two months ago, as opposed to describing them abstractly.  The Post wrote that it had reviewed a "portion" of Ford's notes.

Additionally, Grassley requested copies of communications between Ford and the media describing her allegations, saying that the legal team's failure to provide Ford's full correspondence with The Washington Post suggested a "lack of candor."

In a separate letter to Democratic Sen. Chris Coons, who also sits on the Judiciary Committee, Grassley wrote, "The accuser freely admits to having no evidence whatsoever that Judge Kavanaugh even attended this party. … We’ve reached a new level of absurdity with this allegation."

The scathing letters come as Fox News has learned from a source that the FBI may wrap up its investigation into misconduct accusations against Kavanaugh as soon as late Wednesday, potentially clearing the way for a final Senate vote on his confirmation within days.

If the FBI's report is indeed delivered to the White House on Wednesday, Fox News expects a vote on Kavanaugh's confirmation could come as soon as Saturday. Senate Majority Leader Mitch McConnell, R-Ky., must first satisfy a number of procedural and parliamentary hurdles before a vote can be held, including filing a cloture petition, which must remain pending for a full day, in order to formally end debate on Kavanaugh's nomination. McConnell has vowed to hold a vote by the end of the week.

WATCH: GRAHAM VOWS TO PROBE WHY FORD CLAIMED IGNORANCE ABOUT GOP OFFER TO TESTIFY IN CALIFORNIA

The uncorroborated sexual misconduct allegations against Kavanaugh have faltered in recent days, as the credibility of his three most prominent accusers -- Ford, Deborah Ramirez and Julie Swetnick -- has come under question. Democrats increasingly have focused their arguments on Kavanaugh's temperament during Thursday's hearing, as well as whether he lied under oath about references in his high school yearbook.

Kavanaugh acknowleged sometimes having "too many" beers in high school and college, but some Democrats have suggested he lied by not going further and admitting that he had "blacked out." None of Kavanaugh's classmates has said he blacked out, although some have come forward to suggest it's likely that he did at some point.

For his part, Senate Majority Leader Mitch McConnell, R-Ky., on Monday called out what he said were transparent stall tactics in a fiery floor speech.

"If you listen carefully, Mr. President, you can practically hear the sounds of the Democrats moving the goalposts," McConnell said. He added later: "Their goalposts keep shifting. But their goal hasn't moved an inch. Not an inch."