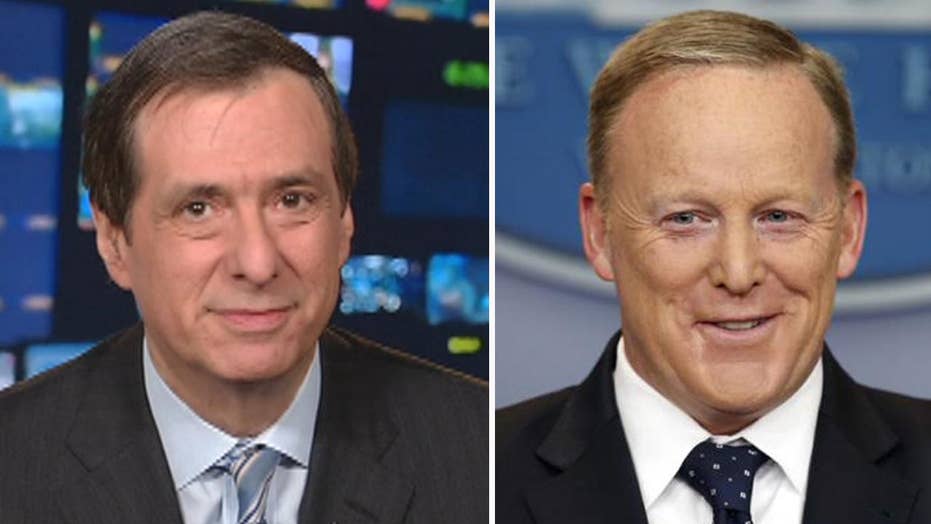 Kurtz: Why being Trump's spokesman is a no-win proposition

'MediaBuzz' host Howard Kurtz weighs in on the difficulties that faced Trump's first press secretary Sean Spicer and how they continue to plague Sarah Sanders.

Note: Catch my interview with Sean Spicer on Sunday's "MediaBuzz"

"Sean, we're getting killed in the media."

With those words, President Trump told his press secretary that while it wasn't his fault, "we need to change some things."

And the change agent was to be Anthony Scaramucci. Sean Spicer's immediate reaction was that bringing him in to run the communications office, with so little experience, "was like asking a student pilot with one lesson to take the stick of an F-22 in mid-flight."

That moment in a small dining room of the Oval Office would end Spicer's tumultuous six-month tenure, which he recounts in a new book, "The Briefing: Politics, The Press and The President."

Hours later, after consulting his wife and mother, Spicer handed Trump his resignation letter, saying the office needed a "fresh start." The president said he needed Sean as part of the team. But Spicer told him that "I have become the story." Fairly or unfairly, he writes, "I had been defined. There was no potential for a do-over."

Spicer makes clear he is no Mooch fan. When they overlapped, there was the "faux 'man hug.'" There was Scaramucci’s threat to start firing people to root out leakers. Spicer, while showing no emotion publicly when Scaramucci himself was fired, now exults that "the president thought he had hired an ace when, in fact, he had hired a kamikaze pilot." (Spicer, a Navy veteran, loves these combat metaphors.)

It is now clear, from the enormous flak aimed at Sarah Huckabee Sanders, that being Trump's spokesman is a nearly impossible job. But the book is not primarily a score-settling venture, although there are numerous shots at the press. There is also some soul-searching about his strengths and weaknesses, which played out on a very public stage.

During the transition, Spicer admits, "I knew in my heart that I was better suited to take on the role of communications director," but the offer of being at the podium was "too tempting to turn down." He also had to cope with the fact that his father, who had been ailing during the campaign, died during the transition, prompting a warm condolence call from Trump.

Spicer offers his fullest account of that disastrous first day on the job, when Trump told him to push back on television reports that his inaugural crowd had been smaller than Barack Obama’s. Spicer stretched the truth in part by throwing in digital audiences, and Trump told him he was not happy—with his performance, with his failure to consult in advance, with his ill-fitting light suit.

"I should have lowered the temperature and not so broadly questioned the media's motives ... I had made a bad first impression," Spicer now concedes, and looking back, that was "the beginning of the end."

During his tenure last year he was frequently asked about Trump’s nonstop tweeting. In the book, Spicer points to Trump's fury at criticism from the "Morning Joe" duo and his attacks on "Psycho Joe," "low I.Q. Crazy Mika" and her purported plastic surgery.

After such outbursts, he says, "the media often expected me to be an ombudsman if not an outright apologist for Donald Trump's tweets." But Spicer insists his job was to communicate the president's views, not to "interpret" them or "massage" them or "tweak" them.

The Briefing deals with other missteps, from his mangled response about Syrian chemical attacks and Hitler's "Holocaust centers" to his surprise demand that all his staffers turn in their cell phones in an effort to root out leakers. Trump's response: "Sean, what were you thinking?" Of all his experiences with the president, he says, "that one was the worst."

Spicer devotes considerable space to media mistakes, media bias and what he sees as media unfairness to his former boss. He singles out some journalists by name--CNN's Jim Acosta and two CNN contributors, radio reporter April Ryan and Playboy columnist Brian Karem--for trying "to become a cable star by generating fake controversy and outrage."

But Spicer also calls Maggie Haberman of The New York Times, with whom he often clashed, "a smart and tenacious reporter with good sources ... Over time—a therapist could have made a fortune from the amount—Maggie and I have learned how to hear and listen to each other."

By Spicer's last few weeks in the spring of 2017, he had become disenchanted with the daily briefings and moved more of them off camera. He says he and Sanders were frustrated that "the briefings had turned into rituals in which reporters asked the same questions about Russia-related issues—over and over—knowing that they would get no different answers but upping the volume and emotion with each pass." The media, Spicer says, "wanted the briefings to be news and sought out any possible misstep as a 'gotcha' moment."

Well, that has been true for every president since the advent of regular on-camera briefings in 1995 (though in no other administration have they been televised as regularly as in the Trump era). The frustration may well have reflected the increasingly combative nature of his own dealings with the press. As Spicer says in describing that time period, "I knew my relationship with the press was radioactive, and I told the president and Reince that I would happily support the appointment of a new press secretary so that I could focus on being the director of communications." The problem was that they couldn't find anyone, and when Sanders took over, the audio-only briefings were largely banished.

What emerges in the book is a combative and yet more thoughtful press secretary than the Melissa McCarthy caricature on "SNL." And yet there were moments when he just seemed snakebit.

The day after Spicer played defense when Trump fired James Comey, he was scheduled to fulfill his Naval Reserve duty at the Pentagon. The next day his wife told him about the CNN breaking-news banner: "SPICER TO MISS PRESS BRIEFING DAY AFTER COMEY WAS FIRED."