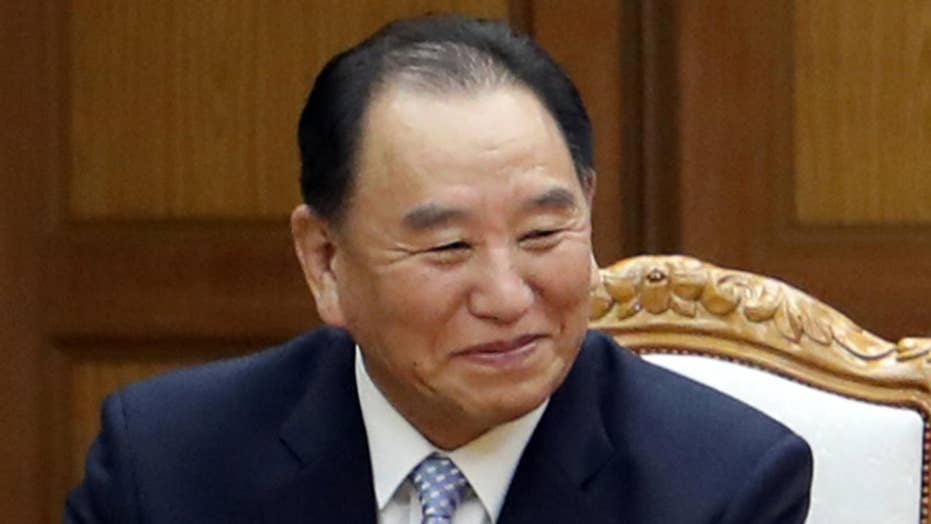 North Korean dictator Kim Jong Un has dispatched his infamous right-hand man on a rare mission to the U.S. amid a diplomatic flurry aimed at salvaging a stalled peace summit.

Kim Yong Chol, Pyongyang's longtime spy chief and a vice chairman of the ruling Workers’ Party, was spotted at Beijing Capital International Airport, where he boarded a flight to New York after first meeting with Chinese officials. As the Hermit Kingdom's black operations chief, Kim has had a bloody hand in some of the rogue nation's most notorious attacks on South Korea and even U.S. cyber targets.

President Trump, who abruptly canceled the June 12 summit in Singapore last week after hostile rhetoric from North Korea, has since opened the door for putting the meeting back on track. In a Tuesday morning tweet, Trump confirmed Kim's pending visit.

“We have put a great team together for our talks with North Korea. Meetings are currently taking place concerning Summit, and more. Kim Young Chol, the Vice Chairman of North Korea, heading now to New York. Solid response to my letter, thank you!” Trump tweeted.

Choe Kang Il, a North Korean foreign ministry official involved with North America issues, was also spotted at the airport and could be accompanying the former spymaster, according to Yonhap.

Kim, who is believed to be 72, will meet with Secretary of State Mike Pompeo this week in New York, the White House said. Their talks will largely focus on rescheduling the summit between the North Korean despot and Trump.

Kim was thrust into the spotlight during the Pyeongchang Winter Olympics in February, when he was sent to attend the closing ceremony. Kim was pictured sitting a row behind Trump’s daughter, Ivanka Trump, during the ceremony, but the two did not interact.

He was also spotted by Kim Jong Un's side during the May summit between the North and the South.

The U.S.-bound official is believed to have plotted the attack on Cheonan, a South Korean warship, and shelling of Yeonpyeong Island in 2010 that left 46 sailors dead. He’s also accused of planting landmines across the Demilitarized Zone, according to Yonhap News Agency. Two South Korean soldiers have been severely wounded by landmines, though North Korea vehemently denied any involvement.

Kim Yong Chol sat a row behind Ivanka Trump during the closing ceremony of the Pyeongchang Winter Olympics. (Reuters)

During Kim’s time in the intelligence agency, which is called the Reconnaissance General Bureau, North Korea was suspected of carrying out the 2014 cyber-attack on Sony Pictures Entertainment. The department is tasked with carrying out cyber warfare and intelligence operations against other countries.

TRUMP: US TEAM IN NORTH KOREA ARRANGING 'FOR THE SUMMIT BETWEEN KIM JONG UN AND MYSELF'

The North Korean official was also blacklisted by the U.S. and South Korea for supporting the regime’s nuclear and missile programs in 2010 and 2016, Reuters reported. His visit this week would indicate a waiver was granted to Kim to come to the U.S.

Kim Yong Chol is a former spy chief who has a controversial past when he was in that position. (Reuters)

At the same time, a “pre-advance” U.S. team was traveling to Singapore to meet North Koreans, the White House said.

In Singapore, a team of U.S. officials, with a fleet of idling vehicles on standby, was at a hotel on the resort island of Sentosa but declined to comment.

While Kim’s visit to the U.S. could prompt both sides to resume plans to meet in Singapore in June, history shows that things could still crumble at the last minute.

However, the warming ties between North Korea and U.S. appeared to be short-lived.