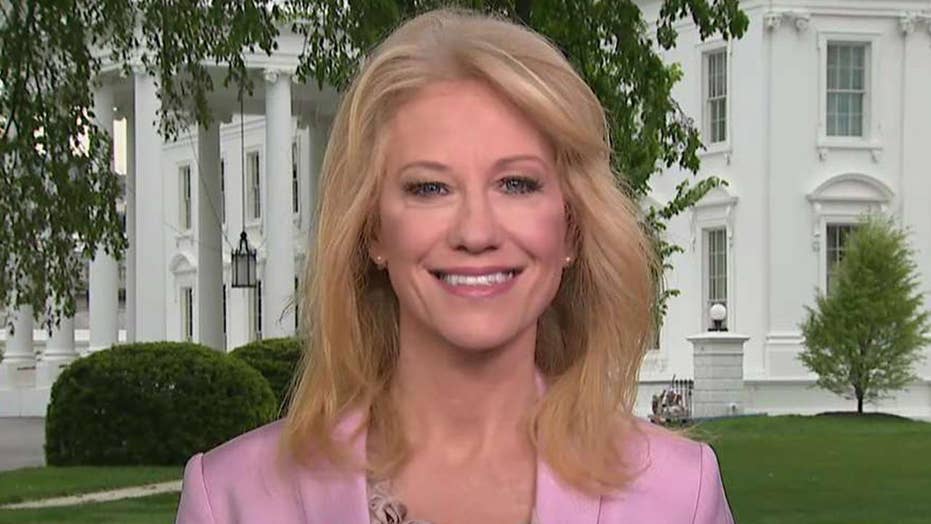 Kellyanne Conway to Democrats: ‘Are you going to talk for the rest of 2019 into 2020 about impeachment or infrastructure?’

Responding to congressional Democrats issuing subpoenas for administration officials, Conway said the president made it “very clear that there’s really no reason to comply with all these requests when we have the Mueller investigation.”

The subpoenas were issued after a redacted version of Special Counsel Robert Mueller's report was released last week, which Democrats argue provides evidence to the contrary of Attorney General William Barr's summary that the investigation found no evidence that President Trump obstructed justice.

“I believe too many people are invested in this investigation and they had a conclusion in search of evidence and they're disappointed in Director Mueller, harassing he and his wife after leaving Easter services, who really wanted a different result,” said Conway on Wednesday.

When asked if the president is willing to use executive privilege in this situation Conway answered, “possibly,” adding, “I think the Democrats have a decision to make. Are you going to talk for the rest of 2019 into 2020 about impeachment or infrastructure? About drug pricing or dragging down a president? About healthcare or Donald Trump? Trump, Trump, Trump at all times.”

She added, “They have to be honest with the people of this country whom they also represent as to whether they are serious about having bipartisan action to try to solve the problems of this nation.”

On Tuesday, Hillary Clinton said, “I think there is enough there that any other person who had engaged in those acts would certainly have been indicted,” referring to the Mueller report.

In response, Conway said, “What she said apart from being irrelevant and partisan, is just wrong. That anybody else would have been indicted? The Mueller report, Mueller did not indict the president.”

“There was enormous pressure on the Mueller investigation and investigators to do what she failed to do, which is deny Donald Trump the presidency. And this woman has always blamed everybody but her, the pathetic candidate and poor campaign that she ran and was,” said Conway.

She added, “And she’s got some experience on impeachment because her husband actually was impeached by the House of Representatives. He was impeached because he lied under oath On August 17, 1998 to investigators.”

When asked what President Trump thinks about a potential contest against Joe Biden, Conway answered, “Bring it on, bring them all on.”

Biden is expected to announce his 2020 candidacy on Thursday.

“I think Biden's timing actually benefits him because the Democrats seem really desperate to find an alternative to Bernie Sanders, who is the clear announced frontrunner right now in the polling and on the ground. Bernie Sanders has a lot in common with Donald Trump, which is he doesn't really care what his party thinks about his candidacy at this point in the primaries.”

Conway said she thinks Biden will be seen as an alternative to Bernie Sanders but added, “he’s got a lot of people in his way.”

“Old, white, male career politicians like Bernie Sanders and Joe Biden is not exactly what the Democratic Party had in mind for 2020 when they’re running all these different folks who are talking about identity politics and what makes them different,” Conway said.