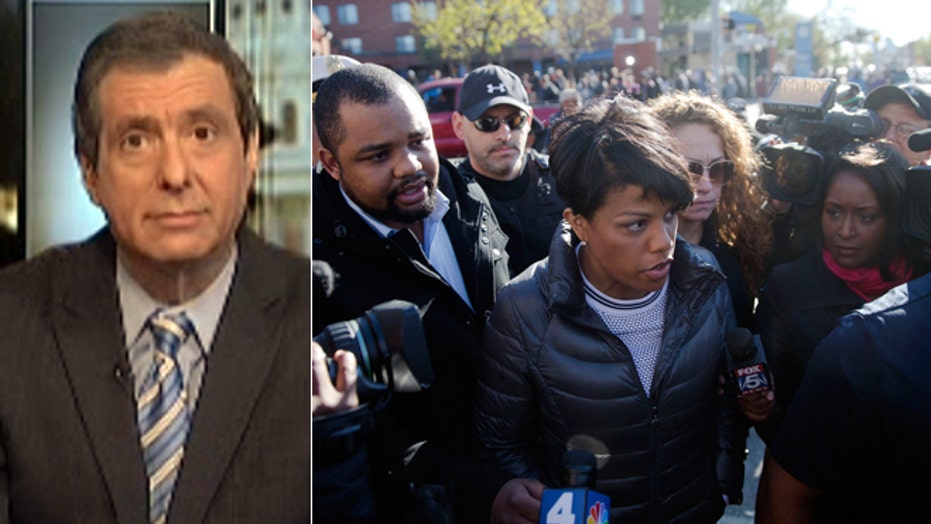 The mayor of Baltimore, Stephanie Rawlings-Blake, insulted our intelligence by blaming the media for reporting her inexplicable remarks on how to deal with the kind of rioters who devastated her city.

The City Council president, Bernard Young, ludicrously complained about being “heartbroken and disturbed by the way the media is focusing on the negativity of this city”— this as Baltimore was burning.

As cable news went wall to wall with scenes of looting and flames of destruction on Monday night, there are questions to be examined about the coverage of Freddie Gray’s death, which triggered the rioting, and its aftermath. But it is absurd to fault the journalists who reported from the streets of West Baltimore as police cars were set on fire and a hose was cut as firefighters attempted to control the flames at a CVS pharmacy. I saw no evidence that the presence of the cameras inflamed a situation where violence erupted in multiple locations, from downtown to western neighborhoods.

In what may go down as one of the dumbest political remarks ever made, Rawlings-Blake spoke before the riots about the protestors’ right to free speech—fair enough—and then said this: “It's a very delicate balancing act, because, while we tried to make sure that they were protected from the cars and the other things that were going on, we also gave those who wished to destroy space to do that as well.”

Space to destroy? Rather than express regret for a terrible choice of words, the mayor lashed out at the media for misinterpreting her comments.

As for Young’s head-in-the-sand observation, CNN’s Anderson Cooper told viewers: “I’m not sure what he thinks cameras should be focused on at a time when cars are being destroyed, lit on fire, 15 police officers are being injured and stores being looted — I’m not exactly sure what images he would like us to be photographing at this time.”

President Obama included a media critique at his news conference Tuesday, saying "one burning building will be looped on television over and over" while the previous days of peaceful protest got little attention and were "lost in discussion." What would you have us do, Mr. President? The city of Baltimore was ablaze and the cops were either overwhelmed or holding back. This was not a case of one or two incidents being unfairly magnified by ratings-hungry producers.

The images from Monday’s rioting in Maryland’s largest city were incredible and incredibly depressing. Fox’s Leland Vittert showed us a liquor store being looted as the police seemingly stood by. As the violence escalated, the new governor, Larry Hogan, said he had waited for a request from the mayor before calling out the National Guard, making viewers wonder why he didn’t act on his own in the fact of such an emergency. The city was on edge because Monday was the day of Gray’s funeral.

Gray died April 19, a week after being arrested and suffering a spinal cord injury while in police custody. Baltimore police admitted that the officers failed to give Gray timely medical care, or to buckle him into the police van transporting him, but no charges have been brought.

There was an initial wave of national coverage, especially on CNN and in the New York Times, but there was not much to argue about, a critical element for cable segments. Obviously this was a huge and fatal blunder by the police in dealing with the 25-year-old, a small-time criminal. In that sense it was more reminiscent of the choking death of Eric Garner on Staten Island than Michael Brown’s death in Ferguson, where a false hands up/don’t shoot narrative initially took hold in the media.

On Saturday night, when police and protestors clashed in face-to-face confrontations, there was little cable news coverage. Fox did not have a reporter in Baltimore. MSNBC and CNN were heavily focused on the White House Correspondents Dinner, the annual, celebrity-studded nerd prom.

After CNN anchor Don Lemon interviewed top officials in Baltimore on Monday night, Baltimore Sun television critic David Zurawik wrote: “I have to note the irony of Lemon pressing Gov. Larry Hogan on why the National Guard and State Police were only coming in Monday night ‘when there was so much chaos Saturday.’

“Hogan might have asked Lemon: Why wasn't CNN covering Baltimore at all Saturday night ‘when there was so much chaos’ here? Really, why not?”

Inevitably in the wake of such riots, the media debate the root causes of the anger that led to the violence. Michael Fletcher, an African-American reporter for the Washington Post who has lived in Baltimore for 30 years, says it’s about haves and have-nots:

“Baltimore is not Ferguson and its primary problems are not racial. The mayor, city council president, police chief, top prosecutor, and many other city leaders are black, as is half of Baltimore’s 3,000-person police force. The city has many prominent black churches and a line of black civic leadership extending back to Frederick Douglass.”

Gray’s criminal background—his mother was reported to have been a heroin user—is not unusual “in the West Baltimore community where he grew up—nor are they unusual in many of Baltimore’s impoverished neighborhoods,” Fletcher says. “The federal government has said that Baltimore has the highest concentration of heroin addicts in the nation. Gray's neighborhood of Sandtown-Winchester, once home to Thurgood Marshall and Cab Calloway, has more recently distinguished itself as the place that has sent the highest number of people to prison in the state of Maryland.”

The Sun recently investigated why the city’s police department had to spend $5.7 million since 2011 to settle lawsuits involving officers who beat up alleged suspects.

It’s a shame that it took the violence we saw on Monday to fully concentrate the media’s attention on Freddie Gray’s death. It’s also a shame that thugs, looters and criminals were able to destroy part of the city as the television cameras were rolling.