Trump predicts FISA will be 'historic'

President Trump weighs in on Ukraine and predicts the upcoming FISA report will be "historic."

President Trump said Friday that Democrats "looked like fools" during the public impeachment inquiry hearings this week and predicted that the release of Department of Justice Inspector General Michael Horowitz's report on allegations of Foreign Intelligence Surveillance Act (FISA) warrant abuse will be "historic."

In a phone interview on "Fox & Friends" with hosts Steve Doocy, Ainsley Earhardt, and Brian Kilmeade, the president said that his controversial July phone call with Ukrainian President Volodymyr Zelensky was a "good conversation."

"And these were their witnesses. This was the best they've got," he continued, calling House Intelligence Committee Chairman Adam Schiff, D-Calif., a "sick puppy." 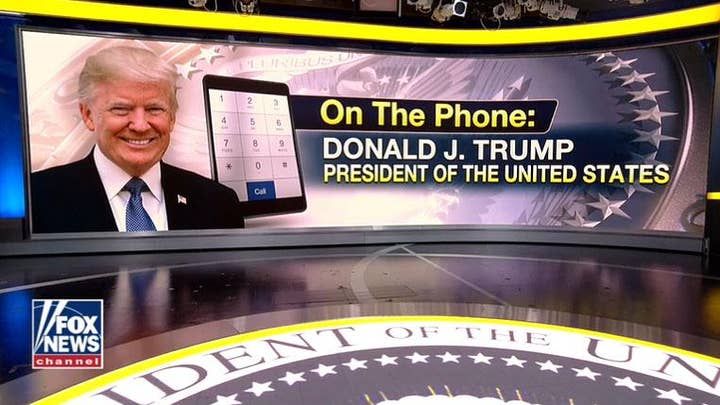 "Now, what you're going to see, I predict, will be perhaps the biggest scandal in the history of our country," the president continued, noting that he is letting Attorney General William Barr "handle it."

"And, if it's historic, you're going to see something. And then, perhaps even more importantly, you have [John Durham's report] coming out shortly thereafter -- the U.S. attorney -- and he's already announced it's criminal," he added.

"I'll tell you what, you have a lot of very bad people," Trump concluded, repeatedly accusing top-level Obama administration officials of authorizing "spying" on his 2016 campaign.

For more than a year and a half, Horowitz has been investigating alleged misconduct related to the FISA warrants delivered by the Foreign Intelligence Surveillance Court (FISC). The Justice Department and FBI obtained warrants in 2016 to surveil Trump adviser Carter Page. It is unclear, at this point, if Page was the only Trump official that the DOJ obtained a FISA warrant against.

But the inspector general’s investigation is not the only probe related to alleged misconduct at the onset of the investigation into Russian meddling and potential collusion with Trump campaign associates.