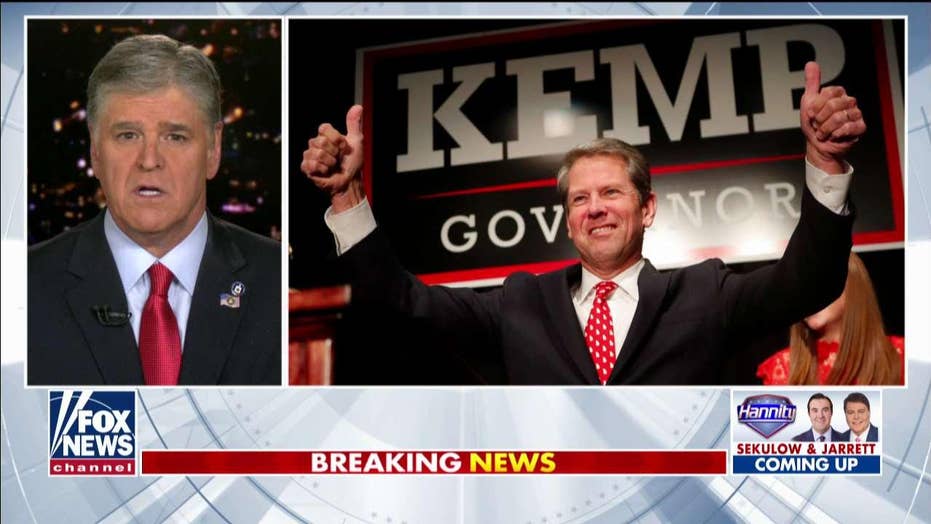 Incumbent Sen. Johnny Isakson, R-Ga., is retiring at the end of the year due to health issues. Kemp, a Republican, is expected to choose business executive Kelly Loeffler, a member of the WNBA Atlanta Dream's ownership group and, according to the Atlanta Journal-Constitution, a six-figure donor to 2012 Republican presidential nominee Mitt Romney's political action committee.

Hannity said on his Fox News program that Kemp should appoint Collins, the top Republican on the House Judiciary Committee and a staunch defender of President Trump, to fill the seat, calling the 53-year-old a "rock star."

"I have no idea what the Republican governor of Georgia is doing," he said. "[Collins] single-handedly helped spearhead the GOP's impeachment-coup-resistance with great, great courage and conviction -- unlike so many others. I don't know why the governor of Georgia ... Brian Kemp is appointing [someone] who appears to be an untested, big-Republican Romney donor described by many as a 'RINO'."

Hannity added he has invited Kemp, who defeated Democrat Stacey Abrams in 2018, on his syndicated radio show and Fox News program but said that the governor has thus far declined.

During an interview with Rep. Matt Gaetz, R-Fla., a Trump supporter who has sparred on Twitter with Kemp and some of his allies, Hannity joked that the lawmaker was being considered an "interloper" in his neighboring state's politics.

"[Donald Trump] told you how to be supportive: Appoint Rep. Doug Collins," Gaetz -- whose Florida panhandle district borders Georgia -- tweeted at Kemp on Friday. "You are ignoring his request because you THINK you know better than POTUS."

In response to one of Gaetz's tweets, Ryan Mahoney – who the Journal-Constitution identified as a Kemp aide – tweeted that the Florida lawmaker should "mind [his] own business" and appeared to jokingly claim he played with "Pokemon cards" and "legos."

In another tweet, Gaetz responded to criticism of his own comments about the expected choice of Loeffler by claiming Kemp's team is "so scared of Stacey Abrams that you're making a bad Senate pick."

"You forgot why and how you won," he added.

Kemp appeared to take the critiques in stride, tweeting Friday that the "attacks and games are absolutely absurd. Frankly, I could care less what the political establishment thinks. Happy Thanksgiving."

Isakson's Senate seat will be up for grabs again in November 2020 in a special election that will determine who serves the final two years of his term. Sen. David Perdue, R-Ga., another Trump ally, will be on the ballot that same year.

A Loeffler victory in 2020 would make her the first woman elected to the Senate from Georgia. However, Collins has left the door open to challenging her in what would be a 2020 Republican senatorial primary battle. Trump was also a big supporter of Kemp in his tight 2018 race against Abrams.

Fox News' Dominick Calicchio and the Associated Press contributed to this report.