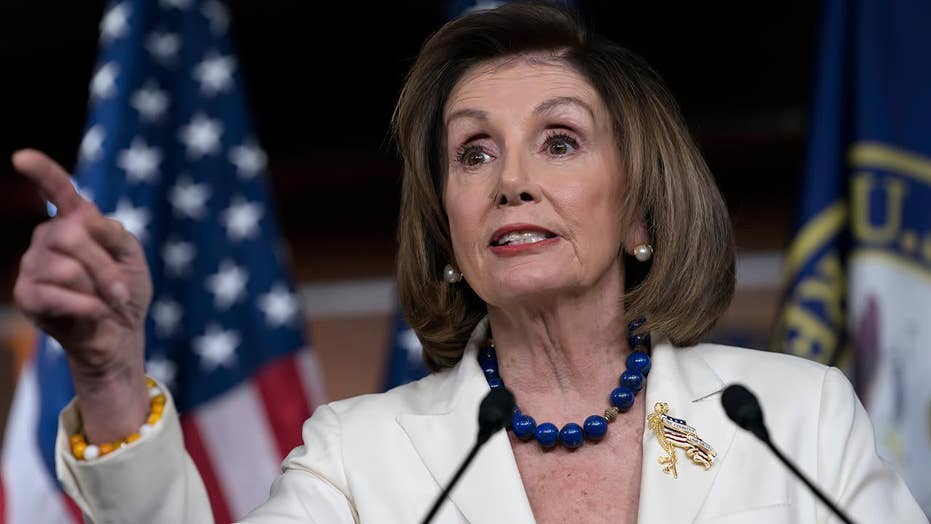 For asking whether she hates Trump.

House Speaker Nancy Pelosi, D-Calif., views the media in a way that will likely make conservatives' heads turn, portraying them in a new interview as "accomplices" of the president.

"I do think that he was assisted by the communications industry, not just Hollywood, but the press as well, because all they do is enable him, and that is really a sad thing," she told The Hollywood Reporter in an interview published Wednesday.

She added that she calls her friends in the press "accomplices" and seemed to push back on the idea that Trump's words should make news.

"I've said to many of my friends in the press, 'You're accomplices, whether you want to be or not,' [and they say,] 'If he's saying it, then it's news.' I don't think it's news, but it monopolizes the airwaves," she said. "So there is a lot of responsibility to go around in terms of the creation of whatever that is in the White House."

NANCY PELOSI SNAPS AT REPORTER AFTER QUESTION ABOUT HATING TRUMP

Actress Olivia Wilde had asked Pelosi about Hollywood's role in creating President Trump and producing the current political environment. Before running for office, Trump was prominent in the media -- especially during his hit show "The Apprentice."

Pelosi, who said she never saw Trump's reality show, indicated to Wilde that she took issue more with the press giving Trump attention, rather than positive or negative coverage in particular.

"But he has a tactic, one that is used by autocrats, which is, 'Just as long as they're talking about me, no matter if it's bad, then you're not talking about my opponent.' When [the press was] talking about him, they weren't saying what Hillary [Clinton] was going to do about health care, to make our economy fair."

Pelosi's interview came as she and top Democrats continue pressing for impeachment.

"Journalists are the biggest supporters of impeachment in the world already. What more would Pelosi have them do, ban the president from news outlets? Has she ever heard of the First Amendment?"

Wilde ended the interview by telling Pelosi that speaking with her was a "dream come true." "We are behind you completely and just thank you for everything you're doing every single day," she said.

When Pelosi suggested Wilde would draw a big crowd at political events, Wilde offered her support. "Yes, I'm there — tell me when you need me, I have your back," she said.