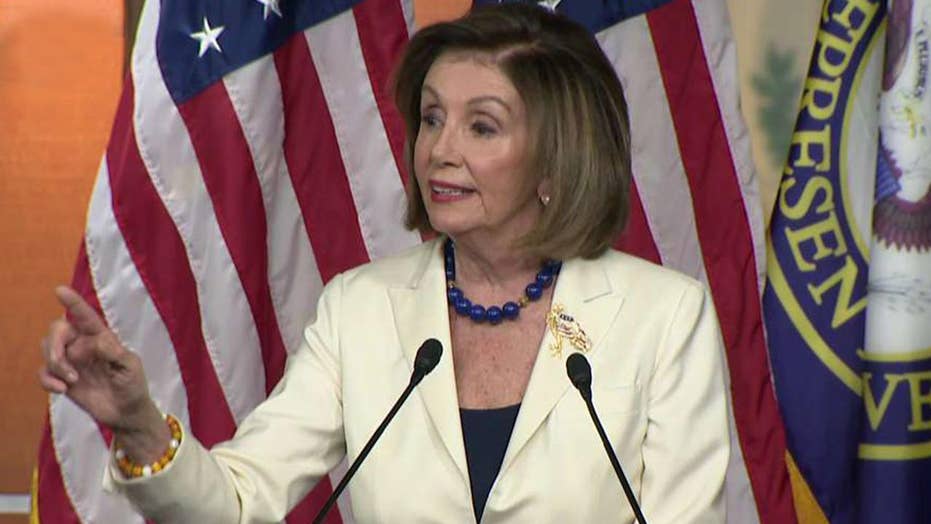 House Speaker Nancy Pelosi, D-Calif., attempted to shut down a reporter on Thursday, telling him not to "mess" with her after he suggested that she might hate the president.

Sinclair reporter James Rosen had asked Pelosi: "Do you hate the president?"

"I don't hate anybody," she initially shot back. She wagged her finger and pointed at Rosen, telling him not to accuse her of hating someone. Rosen denied doing so.

After Pelosi's presser, President Trump appeared to address the issue on Twitter.

"Nancy Pelosi just had a nervous fit," he tweeted. "She hates that we will soon have 182 great new judges and sooo much more. Stock Market and employment records. She says she “prays for the President.” I don’t believe her, not even close. Help the homeless in your district Nancy. USMCA?"

The exchange came during the Speaker's weekly press briefing and just after she publicly called for articles of impeachment against Trump -- a significant development as the House Judiciary Committee holds public hearings in House Democrats' ongoing impeachment inquiry.

"Today, I am asking our chairman to proceed with articles of impeachment," she said, referring to House Judiciary Chairman Jerrold Nadler, D-N.Y.

Thursday's showdown was just the latest of stern condemnations to come from Pelosi. She previously knocked Rosen, a former Fox News reporter, in November, describing him as "Mr. Republican talking points" after he asked a question about Trump getting the right to confront his accuser in the Ukraine controversy.

In September, she also ripped into a reporter who asked her about the House's action on gun control.

“If you are annoyed with my impatience," she added, "it’s because people are dying because Senator McConnell hasn’t acted. Why don’t you go ask him if he has any regrets for all the people who died because he hasn’t acted?”

She's also repeatedly invoked her Catholic faith when getting testy with reporters -- particularly with her stance on abortion.