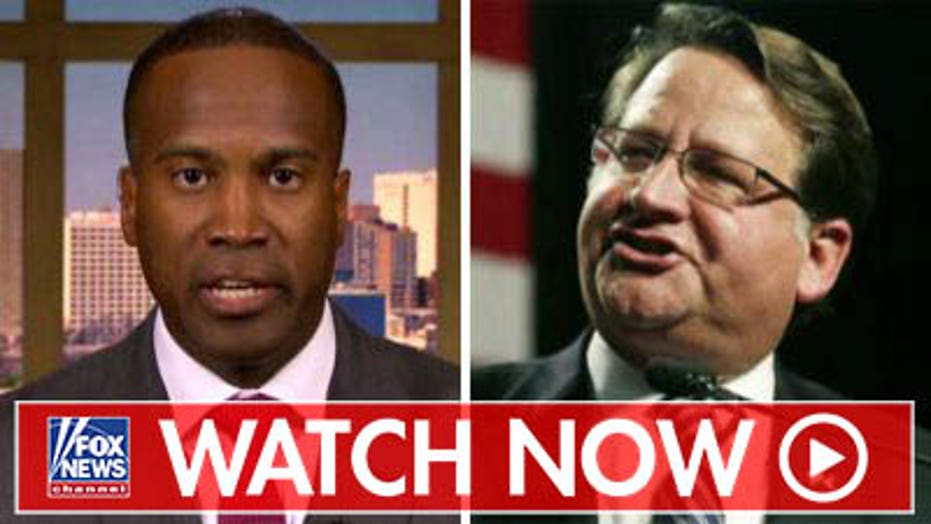 Sen. Gary Peters, D-Mich., may prefer to stay out of the spotlight, but that doesn't change the fact he is a career politician who has neglected his constituents, according to 2020 challenger John James.

James, a Republican, told "The Daily Briefing" Wednesday that his multiple tours of duty during Operation Iraqi Freedom and his business experience trump what Peters brings to the table.

"We had to start off with nothing," James said of his campaign. "We started off with a wing and a prayer -- with a campaign that knew we wanted to bring glory to God and help our neighbor."

James made the remarks to host Dana Perino in response to a Politico story about Peters' persona as a "low-key," "genial" Midwesterner

In the article, Peters was quoted as saying that being "on cable news and TV throwing rocks and getting attention for yourself -- that's not who I am."

Peters also referred to James as a "Donald Trump clone running for Senate."

On "The Daily Briefing," James defended his positions, saying he has experience as a businessman and job-creator in Detroit -- the state's largest city.

GOP RAMPING UP GRASSROOTS, STATE-LEVEL EFFORTS WITH NEW INITIATIVE BEFORE 2020

"Being unknown by 40 percent of the electorate after 30 years as a career politician and 10 years in Washington is not a badge of honor," he added.

Peters, first elected to the Senate in 2014 upon the retirement of longtime Sen. Carl Levin, D-Mich., previously served three terms in the U.S. House of Representatives and spent four years as Michigan Lottery commissioner. He also was a member of the Michigan Senate and has made unsuccessful runs for governor and state attorney general in the past.

James, who unsuccessfully challenged Sen. Debbie Stabenow, D-Mich., in the 2018 election, pledged to make a full-fledged effort to unseat Peters.

"I wasn't the establishment favorite," he said.

"I plan on using every resource at my disposal... to shed light in the dark spaces of Michigan that have been underrepresented and neglected by Senator Peters. I'm going to bring Michigan's issues and take them to Washington, and work with anyone and everyone to make sure we create pipelines of prosperity into our neglected neighborhoods and our forgotten farms."

Peters is one of only two Democratic senators up for election in states won by President Trump in 2020. The other is Sen. Doug Jones of Alabama.