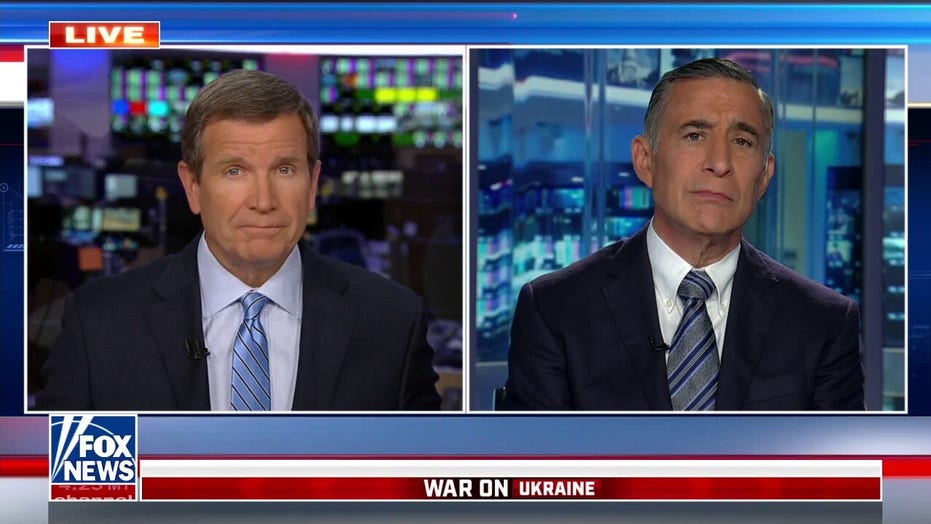 California Rep. Darrell Issa weighs in on the impact the war in Ukraine is having on California's record gas prices on 'Fox Report.'

International media blasted President Biden for his unscripted remark Saturday when he declared Russian President Vladimir Putin "cannot remain in power," concluding it was a gaffe that hurt more than helped the effort to support Ukraine amid the ongoing Russian invasion.

Biden called the invasion a "strategic failure" and pledged continued U.S. aide for Ukrainians in his address. But it was his off-the-cuff comment about Putin that made headlines.

"For God’s sake, this man cannot remain in power," Biden said to conclude his speech in front of the Royal Castle in Warsaw, Poland.

Several British media outlets referred to Biden's remark as a "blunder," a dangerous gaffe, or a moment that left the international stage in "chaos."

"Chaos as Joe Biden says Putin ‘cannot stay in power,’" a headline from The Telegraph read Sunday, with the subhead, "US policy in disarray as White House is forced to row back president’s call for Russian leader to be removed." In a separate piece, The Telegraph's Defense and Security Editor Dominic Nicholls described the scene: "Joe Biden’s gaffe is ‘a gift’ to an isolated and increasingly erratic Vladimir Putin."

"Gaffe-prone Joe Biden leaves White House reeling after Putin remark -‘Cannot remain in power," The Daily Express wrote, with a subhead reading, "Joe Biden was once again left red-faced after he mistakenly suggested a change in Russia's regime while addressing the public in Poland on Saturday."

"Farce as White House clarifies Biden assertion that Putin must be toppled. President was not referencing ‘regime change’, says statement," The Times of London wrote.

A writer for The Spectator wondered if Biden's latest controversial remark could lead to "World War Three."

"Yet this was Biden’s third potentially world war three-triggering blunder in as many days," he wrote.

René Pfister, a contributor to the German outlet Der Spiegel, argued that while he's happy Biden is in office and not former President Trump, Biden's uncaged remarks continue to reverse any progress he may have made in the response to the Russian invasion.

"Joe Biden has the special talent of tearing down with his loose mouth what he has previously worked hard to build up," Pfister wrote.

Pfister said the speech started out well, but his now infamous line overshadowed it.

"Biden spoke as one would wish from an American president: emotional, full of historical references and yet to the point - if Biden had not said the fateful sentence at the end: 'For God's sake, this man cannot remain in power,'" Pfister said.

"But apparently Biden's sentence wasn't planned, it was one of those rhetorical blunders he's been known for for decades and has gotten him into trouble on more than one occasion," he later added. "But now it's not about a failed election campaign slogan, but about war and peace."

"It's hard to tell what's a gaffe or what is Joe Biden's true opinion at this point," Markowicz told Fox News Digital. "The most dangerous thing about the president's performance on the world stage is that it's clear he is being coached on what to say and that his words are contrary to his true thoughts. Is the American president in charge or isn't he?"

"Frankly, I was thinking that [President] Biden talks a lot," Ukrainian journalist Misha Gannytskyi told Fox News Digital. "Even – talks too much. In Slavic tradition ... if you [aren't] ready to start a fight, don't speak. Or your enemy will understand that you are not about an action."

American media shared their own disappointment in the president's speech. CNN's Kimberly Dozier called the address "indisciplined" and "a gift to Russian propagandists," while NBC News' chief foreign correspondent Richard Engel suggested Sunday that Ukrainian President Volodymyr Zelenskyy was not "overly impressed" by the Putin declaration.

Axios concluded the "takeaway from a 27-minute speech of massive consequence — on the world stage, a border away from Russian missile strikes in a war zone — was derailed by a taunt."

The president's Putin remark was the second time in two days the White House had to walk back one of his statements. Biden previously appeared to suggest there could be boots on the ground in Ukraine while speaking to paratroopers in Poland.

The White House clarified that no American troops would be going into battle.

"The president has been clear we are not sending U.S. troops to Ukraine and there is no change in that position," a White House spokesperson told Fox News on Friday.