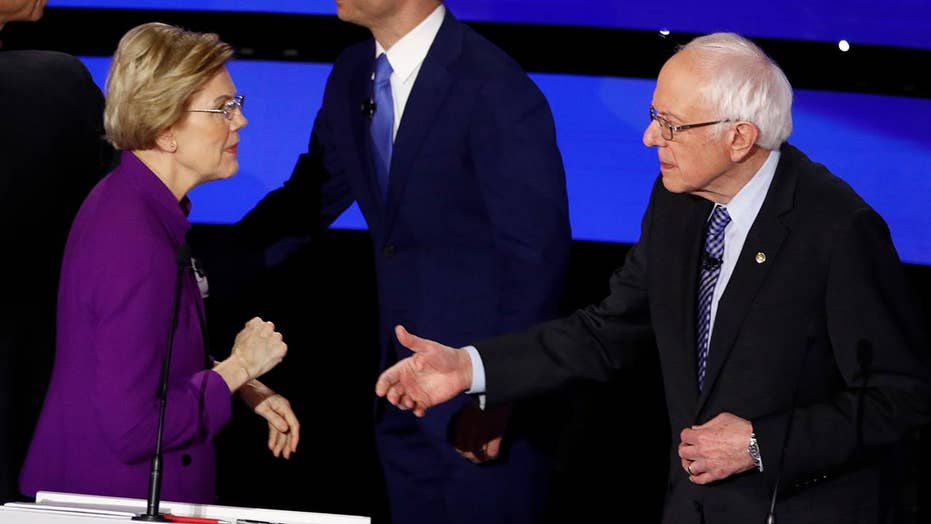 Sens. Elizabeth Warren and Bernie Sanders clash on the debate stage about a past conversation on if a woman can win the White House; Peter Doocy reports from Des Moines.

CNN was taking heat from every direction following Tuesday night's debate. Critics have called "media malpractice" over the network's handling of the dustup between Sens. Bernie Sanders, I-Vt., and Elizabeth Warren, D-Mass.

One of the most talked-about moments of the night was when Sanders was asked by the debate moderator, CNN political correspondent Abby Phillip, about CNN's report that cited unnamed sources who claimed that the Vermont senator told Warren that he believed a woman couldn't win the presidency during a December 2018 ahead of their presidential runs. Ahead of the debate, Sanders flatly denied the charge while Warren affirmed the reporting after having initially declining to comment.

That moment elicited harsh condemnation from both sides of the aisle, as pointed out by The Hill media reporter Joe Concha.

"CNN is usually a punching bag for conservatives in the Trump era, but I can't say I've seen it so harshly criticized from the left as it is today due to last night's debate and particularly the treatment of Bernie," Concha said on Wednesday.

“He says he didn’t say it. So you turn to Elizabeth Warren and say, 'Did he say it?' That’s the issue. I mean, it’s bizarre," Brzezinski said in response to Phillip's questions to the candidates.

She added, "What the heck happened there? Are they listening? Because you gotta listen when you do a debate and then take the question to the next candidate."

"Wait CNN just refused to listen to Bernie and just took what Warren said was the truth?" Piker asked, later adding, "What CNN is doing tonight should be criminal."

Piker also tweeted that "it should literally be illegal for CNN [to] cover the presidential debates."

The Poynter Institute, the esteemed non-profit journalism organization, called the "jaw-dropping" moment the "biggest misfire" of the night.

"It was tantamount to calling Sanders a liar, and that certainly should not be a moderator’s job, especially when Phillip had the opportunity to ask Warren directly if Sanders ever told her that. If Warren said yes, then and only then should Phillip have asked what Warren thought," Poynter's Tom Jones wrote.

Rolling Stone Magazine was pretty animated with its criticism of CNN, saying the network's debate performance was "villainous and shameful" and accused the media outlet of combining a "naked political hit with a cynical ploy for ratings."

"Over a 24-hour period before, during, and after the debate, CNN bid farewell to what remained of its reputation as a nonpolitical actor via a remarkable stretch of factually dubious reporting, bent commentary, and heavy-handed messaging," Rolling Stone contributing editor Matt Taibbi wrote.

Taibbi continued, "If the network doesn’t see trouble in this, it’s delusional... [Voters] pay more attention to media manipulations, and it doesn’t get much more manipulative than punching above the facts to advance transparent political narratives, which is a new and accepted habit in the commercial news landscape."

Even the far-left Huffington Post declared CNN "completely botched the Democratic presidential debate" in a headline of its report.

"This was the worst debate of the process so far," HuffPo senior reporter Zach Carter concluded.

A CNN insider who spoke to Fox News also had problems with the way the questions were framed to the two candidates, pointing to Warren's poor "track record" of telling the truth and how the Massachusetts senator isn't "an accurate source of information."

"An accusation that has been denied is still an accusation," the network insider told Fox News.

"This was disgraceful. How many editors would allow a reporter to just steamroll over a denial like this (from one of the only parties actually privy to the matter, mind you) and treat the original allegation as unimpeachable fact?" Kludt asked.

Some even compared the debate moment to the infamous 2012 debate exchange between then-GOP presidential candidate Mitt Romney and then-CNN anchor Candy Crowley after the governor attacked President Obama's response to the Benghazi terrorist attack.

"I guess CNN's Candy Crowley is one who began the tradition of outright partisan moderators so good on them I guess," The Hill TV host Saagar Enjeti reacted, after labeling the incident as "media malpractice."

Social media wasn't kind to the anti-Trump network with the hashtags "#CNNisTrash" and "#CNNisGarbage" dominating the Twitter trends on Tuesday night and throughout Wednesday.

However, CNN's biggest critics may have actually been from the Sanders campaign.

Numerous members of Sanders' team slammed CNN throughout the debate, primarily on the framing of its policy questions on health care.

"Imagine if you had a media in this country who challenged other candidates about why they don't support universal health care that will save Americans money and improve health care in this country? Instead we're stuck in a corporate frame of fearmongering," Sanders campaign manager Faiz Shakir said in reaction to a slanted CNN on-air graphic.

Nina Turner, co-chair of the Sanders campaign and a former CNN commentator, made a similar observation, suggesting the graphics that aired during Sanders and Warren's debate responded favored one candidate over the other.

"Shame on @CNN for this right-wing framing. Health care is a human right," the Sanders campaign co-chair wrote.

"Congratulations to CNN for spending lots of airtime trying to interpret silent body language at the end of the debate, rather than @JoeBiden trying to cut the Social Security program that millions of human beings rely on to survive. Great work," Sirota said.

This wasn't the first debate hosted by CNN that was widely criticized. The network's first Democratic debate in July was slammed for not mentioning the timely testimony of former Special Counsel Robert Mueller despite its anchors having pushed the anti-Trump Russia collusion narrative for years. And its debate in October was ripped for its perceived favoritism for Warren as well as for not asking any questions on climate change.