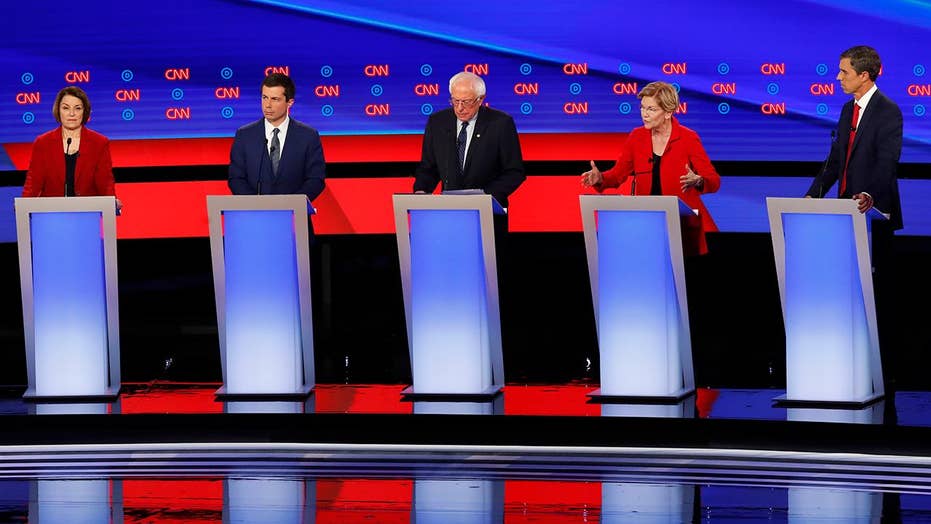 Moderate candidates warn moving too far left will get Trump reelected on night one of the primary debates in Michigan; Kristin Fisher reports from Detroit.

The first installment of CNN’s two-night Democratic primary debate was slammed by critics before it even began. Then it concluded without a single mention of CNN’s longstanding narrative that blew up during former Special Counsel Robert Mueller's testimony.

Mueller's testimony before two House committees last week was largely considered a “disaster” for Democrats and opponents of President Trump who hoped he would provide a path to impeachment. However, Mueller was oddly never mentioned throughout CNN’s debate and Russia was essentially an afterthought at the first gathering of 2020 hopefuls since the testimony.

“CNN flounders now, they’ve no idea what the best anti-Trump message is, given the total meltdown of the Russia narrative, post-Mueller,” a CNN employee told Fox News on the condition of anonymity. “My internal read is honestly that they’re in despair. They so believed in a Mueller smoking gun. I think they’re slowly realizing that Trump wins again, and they almost can’t fathom that outcome.”

Conservative strategist Chris Barron told Fox News that CNN’s decision not to ask about the Mueller probe “speaks volumes about how little political currency Mueller or the Russia hoax has even among Democratic partisans” at this point.

“It is fascinating that Mueller, who Democrats have spent two years making the centerpiece of their efforts to undermine the President, was conspicuously missing from last night’s debate,” Barron said.

While Mueller was ignored by CNN’s moderators, the words racist or racism were uttered 15 times, the word “border” was mentioned 29 times, climate change was discussed 28 times and health care-related phrases were spoken 112 times.

“After two years of breathless media coverage of Russia and its supposed influence on 2016, not a single word last night in #DemDebate about Mueller. Even those radicals on stage realize Americans care about jobs, immigration, healthcare... rather than a few Russian media trolls,” Cortes tweeted.

Cornell Law School professor and media critic William A. Jacobson thinks that campaign consultants who prepped the candidates “obviously told their candidates to stay away from collusion and impeachment because they are losing electoral issues,” but that doesn’t explain why CNN’s moderators didn’t ask about it.

"After almost three years of non-stop Russia-collusion conspiracy theories by CNN and other liberal media, and threats by Democrats to impeach Trump by several of the Democratic presidential candidates, those topics were ignored during the CNN Democratic first debate,” Jacobson said. “That is a sign of how badly the Mueller Report and testimony hurt Democrats.”

CNN’s decision to bypass Mueller inquiries was hardly the only thing that critics took issue with during the debate.

CNN was criticized earlier this month when it announced that far-left opinion host Don Lemon would moderate alongside journalists Dana Bash and Jake Tapper, as debate moderators are typically straight-news anchors. Lemon offers his personal anti-Trump views on a nightly basis, so allowing him to grill 2020 hopefuls on a debate stage raised eyebrows across the media landscape.

The criticism of Lemon didn’t end when the debate began. “Don taking more partisan shots at Trump than the literal Democrats on the stage,” Fox News contributor Guy Benson tweeted.

“The moderators were too strict on time limits, so even though the debate was policy-focused, it felt very surface-level. I also think good moderators would have exploited the tension between Bernie Sanders and Elizabeth Warren, and instead the way the questions were framed allowed them to team up against the moderates,” Athey told Fox News. “In today’s Democratic Party, it’s pretty obvious who is going to win that fight.”

CNN was also widely lampooned for dedicating an hour of primetime coverage to an elaborate, NBA-lottery style event to determine which night specific candidates would take the stage.

The liberal network’s debate draw was even criticized by the New York Times, as the paper’s chief television critic James Poniewozik asked, “Is it any surprise that CNN, the home of saturation coverage and interminable countdown clocks, would try to wring more airtime out of the debates?”

The highly-publicized stunt ended up drawing fewer viewers than regular programming on Fox News and MSNBC.

Once the big day arrived, CNN was ridiculed again. This time for the network’s “over-the-top” coverage of its own event. 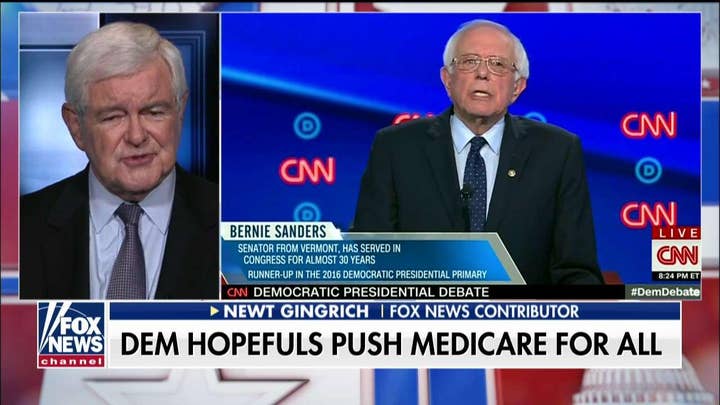 “This is like the Olympics for them, but the sport is Trump name-calling,” political satirist Tim Young told Fox News. “They have 2 nights of piles of people calling him racist, misogynist… I can only imagine the anchors are welling up with tears of joy.”

Mediaite, a media industry watchdog site, published a roundup of insiders who “brutally mocked” CNN’s elaborate, “dramatic movie-trailer-style” intro to the debate. The article featured an assortment of media personalities on both sides of the aisle poking fun at CNN.

The Daily Beast’s top editor said, “If you want to stick your face into sharp objects, this CNN debate intro is here for you,” while a reporter from "The Week" noted that the "montage from CNN was the single dumbest thing I have ever seen."

CNN’S ‘OVER-THE-TOP’ DEBATE COVERAGE LAMPOONED: ‘THIS IS LIKE THE OLYMPICS FOR THEM’

NewsBusters managing editor Curtis Houck told Fox News that the event is an example of why CNN’s reputation has diminished since President Trump took office.

“CNN's over-the-top coverage has shown how unserious they are about fostering sober, substantive coverage of what could very well be the most important election of our lifetimes,” Houck said. “CNN has brought everything that people across the political spectrum have come to despise… countdown clocks, massive panels, 'College Gameday'-like sets, snarky chyrons, self-righteous 'Reliable Sources' newsletters about their supposed greatness, and refusing to look inward about why their ratings are so pitiful to name a few.”

For the first of two debates, CNN averaged just under 8.5 million viewers, according to early Nielsen data. That's far better than the ratings-challenged network usually fares, but also well below the combined 18.1 million viewers who tuned in to NBC, MSNBC and Telemundo for the first round of Democratic debates in June.