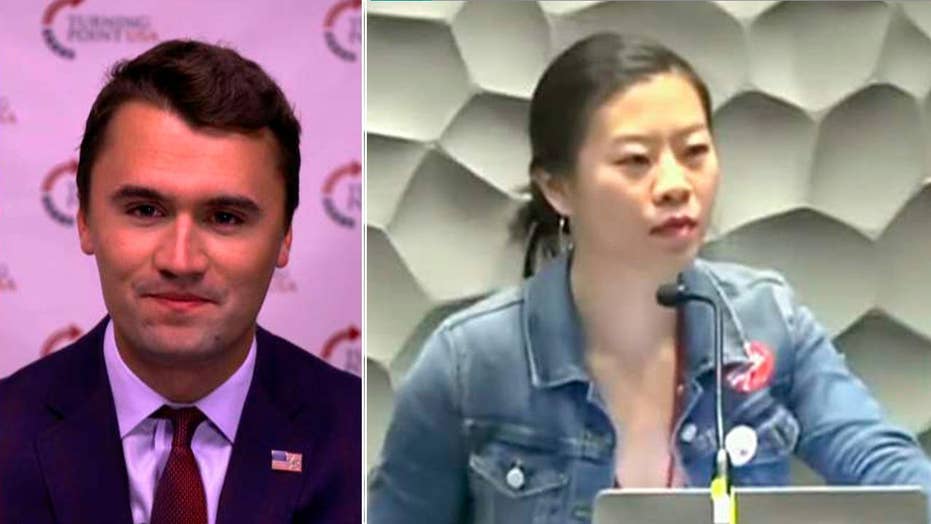 Controversy as the Democratic Socialists of America hold their national convention in Georgia; reaction from Charlie Kirk, founder of Turning Point USA.

Director and founder of Turning Point USA Charlie Kirk said Monday that “gendered language” nurtured on college campuses “needs to be stopped” before it spreads.

“This is something that comes straight from the university, where instead of saying ‘hey guys,’ you have to say ‘hello people,’ because ‘guys’ somehow reinforces the idea that there is a patriarchy in our society,” Kirk told "Fox & Friends," reacting to a video of an attendee at the Democratic Socialists of America convention shouting down the use of "gendered language."

“This is the sort of radical ideology that only universities are expressing and advancing and, Turning Point USA, we see this all the time," he said. "Where, if you say something as innocent as, ‘Hey guys, can you please calm down a little bit or not be as loud,' all of a sudden you’re being accused of using ‘gendered language.’”

The Democratic Socialists of America held a National Convention in Georgia where someone angrily demanded the end to the use of “gendered language” responding to a delegate who complained of “sensory overload” from “guys” whispering in the room.

The moment occurring at a gathering of the largest socialist organization in the United States entailed a back-to-back exchange of impassioned hypersensitivity.

“But a singular individual can silence all sorts of discussion and dialogue because they themselves might be offended and understand how this has really negative ramifications because if a singular person might find one thing wrong or one thing objectionable with what decent people find to be normal, correct, all of a sudden, all sort of dialogue discussion can be absolutely thwarted and ended completely,” Kirk said.

Kirk explained that such sentiments are “the mainstream on college campuses” and are “not just segregated and secluded to the radicals and the democratic socialists.” He goes on to say that it is spreading to "corporate America," and “will soon be in Congress.”