There's no way to completely eradicate the coronavirus in the state of California, so Democratic Governor Gavin Newsom should loosen restrictions for a small percentage of people instead of risking losing his goodwill by "being petty" about Orange County beach closures, radio talk show host Mike Slater advised Saturday.

Appearing on "Fox & Friends Weekend" with hosts Pete Hegseth, Jillian Mele, and Jason Chaffetz, Slater pointed out that even if there were 10,000 people at the beach in Orange County and the "vast, vast, vast majority" were following health and safety protocol, that's still only "0.3 percent of the county."

"You have 99.7 percent compliance. Almost everyone's on board with you. Don't risk that by being petty and losing maybe 30, 40, 50 percent of the people who are kind of on the fence but still doing what you suggest we do," he urged. "Don't be petty."

On Thursday, Newsom ordered Orange County beaches to close until further notice, saying it was necessary to protect public health while allowing other beaches in California to remain open with some restrictions.

Thursday’s announcement comes days after tens of thousands of people in Orange County packed beaches during a sunny weekend.

In this April 26, 2020, file photo, people sit on the beach in Huntington Beach, Calif. A memo sent to California police chiefs says Gov. Gavin Newsom will order all beaches and state parks closed starting Friday, May 1, to curb the spread of the coronavirus. The California Police Chiefs Association sent the bulletin to its members Wednesday evening. Association President Eric Nuñez said it was sent to give chiefs time to plan ahead of Newsom’s expected announcement Thursday. (AP)

A Wednesday memo to the state's police chiefs indicated Newsom planned to close all beaches in the state. But on Thursday, Newsom said the order applied only to beaches in Orange County.

Newsom reportedly has directed California residents to a list of outdoor activities that the state said are still permissible during the shelter-in-place order.

“We want you to see sunsets,” Newsom said, according to SFGate. “We want you to enjoy activities outdoors.  What they don’t want is people congregating outside in large groups.”

However, many state and local municipalities have been less than pleased with Newsom's restrictive measures.

Huntington Beach and Dana Point city councils voted in emergency sessions on Thursday to take legal action against the governor, arguing it should be up to local leaders and not the Democratic governor to decide when it's safe to return and officials in Modoc County reported it can no longer afford to abide by Newsom's shelter-in-place response. 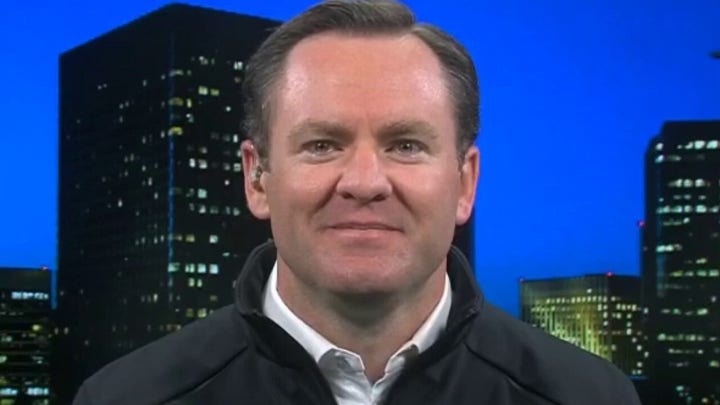 "Yesterday, Governor Gavin Newsom closed 43 miles of Orange County beaches, not because of data, but because of politics," he said. "In our local hospital, we have 475 beds. They have never treated more than 25 people at any given time, and yesterday they had nine people that they were treating, and only one percent of their ventilators were being used."

Law-enforcement personnel on horseback keep protesters on the sidewalk during a demonstration on May Day at the pier during the coronavirus pandemic Friday, May 1, 2020, in Huntington Beach, Calif.  (AP)

Just one day after Newsom's closures, hundreds of protesters flooded Huntington Beach to demonstrate against the action.

Holding signs with slogans such as, “Open Cali Now,” “All Jobs are Essential” and “Surfing Not a Crime/Newsom is a Kook,” as they took to the street, the protesters -- many without face masks and not practicing social distancing -- backed up traffic along the Pacific Coast Highway for at least a mile.

Slater told the "Friends Weekend" hosts he wasn't sure how necessary the lockdown is anymore.

"Listen, if we remember, the whole point about flattening the curve wasn't to end the virus or to prevent everyone from getting sick ever again. It was to flatten the curve. And, praise God, we are so far under that health care capacity in California, it's amazing. I think it's definitely time that we can allow some people to go out and do some things, right?" he asked.

Protesters calling for an end of Gov. Gavin Newsom's stay-at-home orders rally at the state Capitol in Sacramento, Calif. The California Highway Patrol announced on April 22, 2020, that it is temporarily banning rallies at the state Capitol and other state facilities due to the pandemic. A gun store employee and GOP congressional candidate are suing Newsom and the CHP over the halt of protest permits. (AP)

"I don't think everyone is going to go rush back and do everything they were doing before," added Slater.

"And, I think it will be like a nice natural bell curve. Because again, we're not going to prevent everyone from getting this virus. So, let the 2 percent of people go out and do some things if they want," he urged.

"In fairness," Mele interjected, "some people don't abide by the social distancing guidelines and they ruin it and it might be a small group of people and then they ruin it for a larger number of people."

"Yeah," Slater responded. "But, I think it's okay to do that because it is such a small number of people. Again, we are not going to kill the virus. We're not going to stop everyone from getting it. Let a couple [of] people go."

"We are so far under that health care capacity line. It's okay. We don't need to be acting today as if it is March 10th. We have learned enough over the last two months that we can change our behavior a little bit," he concluded.