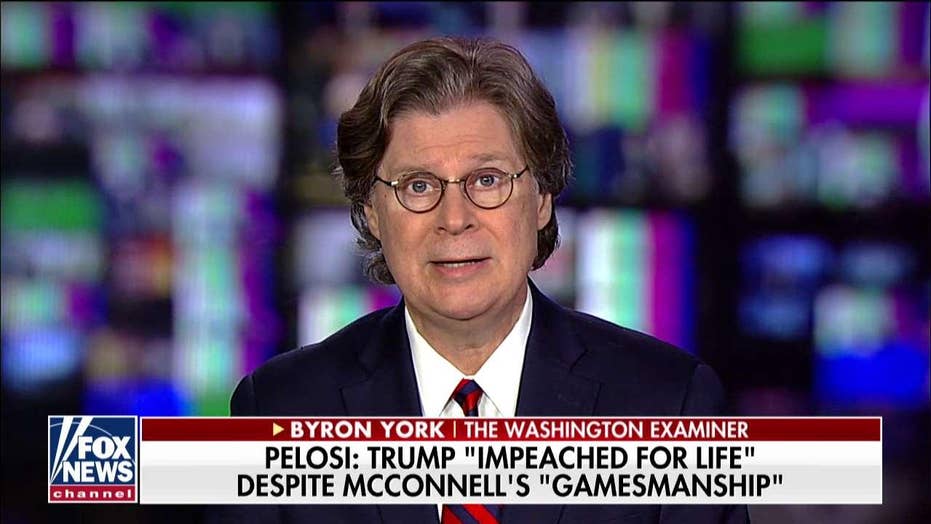 Byron York: Trump and Pelosi are 'trolling each other' on impeachment

President Trump and House Speaker Nancy Pelosi are at the point of "trolling each other" on the subject of impeachment, Washington Examiner's Byron York said Monday, as Pelosi and House Democrats get set to send the articles to the Senate for a trial.

"He'll be impeached forever. No matter what the Senate does. He's impeached forever because he violated our Constitution," Pelosi told The Associated Press last month. She repeated that sentiment in an interview on ABC News' "This Week" on Sunday.

York, a Fox News contributor, said on "America's Newsroom" that the comment was clearly an attempt to "get under the president's skin" and an acknowledgement by Pelosi that Trump won't be convicted in the Senate. He said a Senate trial, which could run for six days a week, would have a "clear effect" on the Democratic presidential campaign, forcing Sens. Elizabeth Warren, Bernie Sanders, Amy Klobuchar and Cory Booker to be off the campaign trail ahead of key votes in Iowa and New Hampshire.

Pelosi confirmed Sunday that she and fellow Democrats will soon discuss sending articles of impeachment against Trump to the Senate for a trial, and defended her decision to wait weeks to do so. 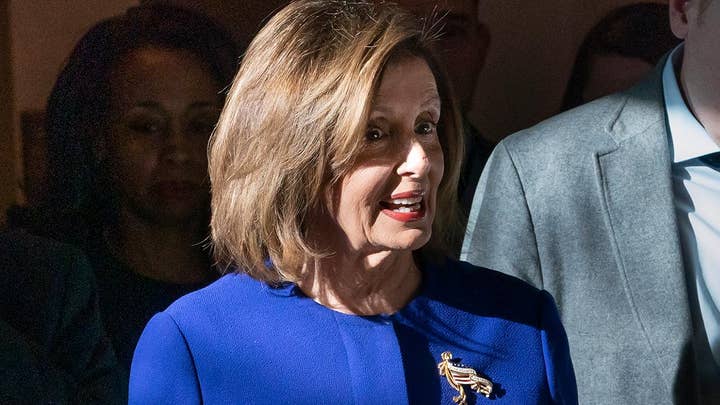 Pelosi has faced criticism from Republicans for not allowing the impeachment process to move forward, and even some Democrats have expressed impatience. Still, she insists it has been an effective strategy.

“No, no, no -- we feel that it has produced a very positive result,” Pelosi said “This Week,” pointing to new information that has surfaced former National Security Adviser John Bolton's announcement that he is now willing to testify in the Senate under subpoena.

“We wanted the public to see the need for witnesses,” Pelosi said, defending the tactic.

During the delay, Senate Republicans introduced a resolution allowing for dismissal of the impeachment case if Pelosi failed to send the articles within 25 days. Senate Majority Leader Mitch McConnell was among those who backed the measure, leading Pelosi to accuse him of being potentially complicit in wrongdoing.

“Dismissing is a cover-up,” she declared.

York wrote in the Washington Examiner that despite her public statements, Pelosi had clearly "caved" on impeachment.

"No, she didn't get any say over the structure of the Senate trial. No, the holdout was not responsible for the emergence of new evidence. No, there is no assurance that the trial will be 'fair.' But Pelosi did grab headlines. And she may believe that she kept Republicans off balance and rattled the president. Maybe she did, although she certainly did not rattle McConnell," York wrote.