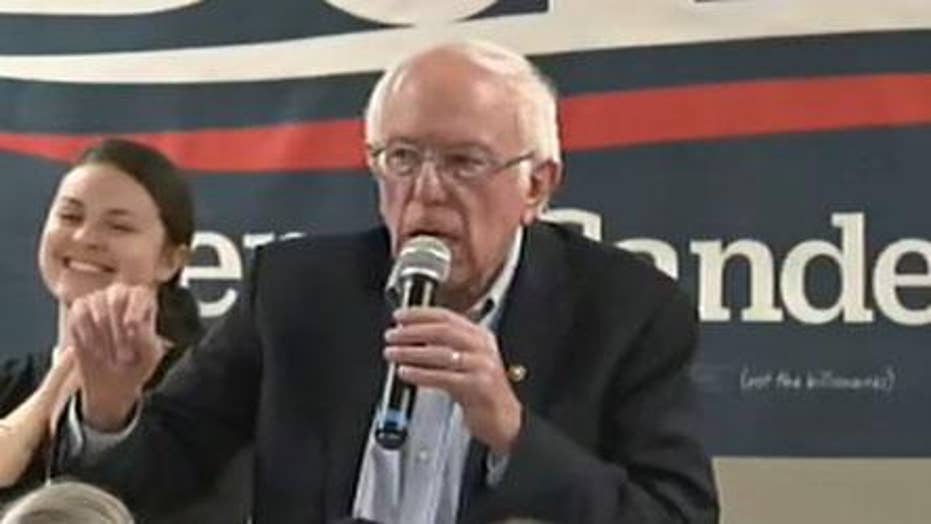 "The plan is nuts, it's absolutely mind-boggling," says Charles Payne discussing Bernie's proposal to raise taxes on anyone earning $29,000 plus a year

Sen. Bernie Sanders has launched a new misinformation campaign on "Medicare-for-all" in advance of this week's Democratic presidential debate.

Last week, advisers to his campaign released a study trumpeting the supposed savings "Medicare-for-all" would bring. Days prior, Sanders refused to say how much his "Medicare-for-all" plan would cost. "I don't give a number and I'll tell you why," he told the Washington Post. "It's such a huge number and it's so complicated that if I gave a number you and 50 other people would go through it and say, 'Oh . . ."

That number is huge all right — as much as $40 trillion over its first decade, as Sanders himself has admitted. The human costs would be even higher, in the form of lengthy waits for critical care.

Paying for "Medicare-for-all" would require a host of new taxes. Before he "forgot" how much it would cost, Sanders proposed funding his plan with everything from a new 4 percent tax on every American household to a new 7.5 percent payroll tax. He claims Americans would pay less for health care, even with these new taxes.

That's unlikely. An analysis from Emory University professor Kenneth E. Thorpe found that 70 percent of working, privately insured households would pay more for health insurance under "Medicare-for-all" than they currently do.

To get a sense of the crippling tax burden "Medicare-for-all" would impose on Americans, look to other countries with health care systems where the government is the dominant or sole provider of health coverage. In 2019, the average Canadian family of four paid over $13,000 in taxes just for their health care, according to research from the Fraser Institute, a Vancouver-based think tank.

That health care tax bill has risen more than 65 percent since 1997. For childless couples, the cost of publicly funded health coverage has risen nearly 75 percent in the same period.

"Medicare-for-all" would require an even bigger tax burden than does Canada's system. Sanders envisions taxpayer-funded coverage of prescription drugs, long-term care, dental and vision care — none of which is covered by our northern neighbor's single-payer system.

Some 4.5 million people in the United Kingdom were waiting for specialist treatment as of March 2019 — an increase of 40 percent over the last five years.

The average household in the United Kingdom pays over 5,000 pounds a year to fund the National Health System — a 75 percent increase from two decades ago. A pair of British think tanks estimate that every British household will have to shell out an additional 2,000 pounds per year to keep the NHS running as the country ages.

Despite the massive tax increases it would require, advocates say "Medicare-for-all" would lower overall health care costs. A recent study co-authored by advisers to Sanders' campaign argues that single-payer systems save money by eliminating the administrative costs associated with private insurers. The authors claim the United States would have saved over $600 billion in 2017 alone if it had cut administrative spending to Canadian levels.

But the study doesn't consider the administrative costs associated with collecting taxes. Under "Medicare-for-all," those costs would almost certainly increase for government, employers and individual citizens alike.

The study also glosses over the fact that most of the administrative savings generated by "Medicare-for-all" would come from putting hundreds of thousands of people currently employed in the health sector out of work.

And then there's the disruption "Medicare-for-all" would foist upon patients. Government-dominated systems the world over do not provide unfettered access to free, high-quality health care. They respond to the impossible task of treating an unlimited number of patients with limited resources by rationing care. That results in long wait times.

Some 4.5 million people in the United Kingdom were waiting for specialist treatment as of March 2019 — an increase of 40 percent over the last five years. More than 11 million Britons waited more than three weeks for an appointment with a general practitioner, according to the most recent government data. Nearly 3 percent of the Canadian population was on a wait list for treatment last year.

These wait times add to the cost of "free" health care. Absence and reduced productivity of sick workers cost the United Kingdom around 23 billion pounds each year.

The truth about "Medicare-for-all" is ugly. Americans watching the debate this week must not fall prey to the falsehoods on health care that will no doubt be flowing from the candidates' mouths.