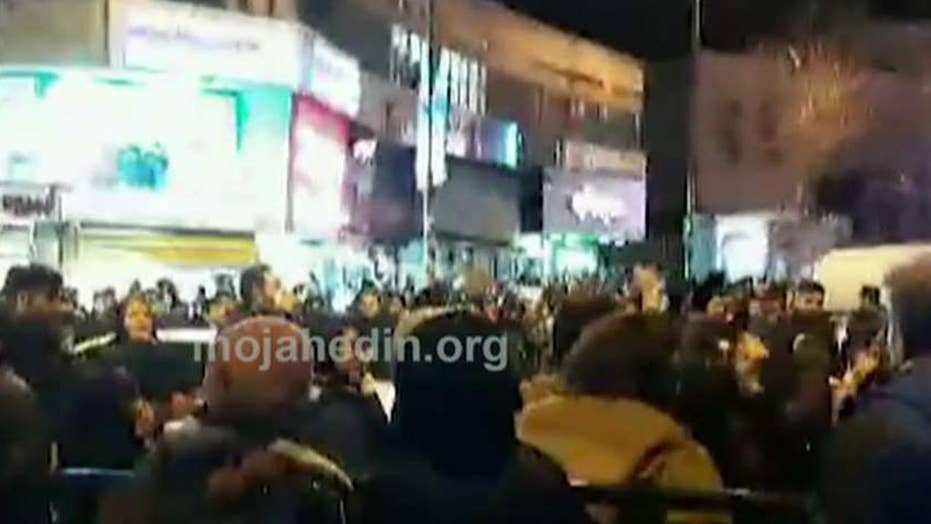 Insight from military analyst Rebecca Grant on what protests mean for the Iranian people and U.S.-Iran relations.

Democratic congressional leaders and presidential candidates who were unsparing in their criticism of President Trump for the escalation with Iran over the past two weeks largely have gone silent now that the protests on the streets of Tehran and beyond have turned their rage toward the regime — and not the Trump White House.

Even as videos emerged online Monday that purportedly show Iranian police and security forces firing live ammunition to disperse protesters, so far among the 2020 Democratic candidates only former Vice President Joe Biden and Sen. Amy Klobuchar, D-Minn., have spoken out in support of the people.

The protesters have railed against the government following the shoot-down of a passenger plane that the Iranian government initially denied involvement in —  Tehran later admitted they downed the jet in a misfire during attacks against U.S. bases in Iraq, following Trump's takedown of top Iranian Gen. Qassem Soleimani.

Trump has issued statements supporting the demonstrations, but his political opponents have been almost entirely silent — after earlier criticizing the Soleimani strike and in some cases even faulting Trump for the fatal plane crash.

Journalist Yashar Ali, who is of Iranian descent and has friends and family there, called out the left for being silent when it comes to the protests, in a viral Twitter thread about the situation.

“I've gone through some of the most active and prominent liberal Twitter accounts and none of them mentioned the Iran protests today,” Ali tweeted Sunday. “These same people were actively tweeting about wanting to avoid war and attacking Trump for his decision.”

Ali continued, claiming that Trump’s critics have been using the situation in Iran to attack the president.

“In this context, Iranians are being used by certain people on the left (i didn't say all) as a tool to attack President Trump. But these same people don't seem to care to ... support their right to protest?” he said.

Ali implied that because the protesters were criticizing their own leaders and not blaming President Trump, “it wasn’t worth it” for liberals to talk about them.

Biden was the first 2020 Democrat to speak out in support of the protesters.

TRUMP ISSUES WARNING TO IRAN: 'DO NOT KILL YOUR PROTESTERS ... THE USA IS WATCHING'

“[N]one of us should be under any illusions about the Iranian regime, and the Iranian people — like all people everywhere — have the right to peaceful protest. The world should support them,” Biden tweeted, while using the message to take a shot at Trump as well, saying the president’s “reckless policies have needlessly endangered our interests in the Middle East.”

Klobuchar simply tweeted, “People should have the right to peacefully protest in any country, including Iran.”

The rest of the remaining Democratic 2020 presidential primary field, however, has been silent. Politico’s Ryan Lizza noticed the general silence from Democratic candidates on the matter, pointing out how some of them have been known for "championing" democracy in the past (Lizza later posted an update after Klobuchar posted her statement).

House Speaker Nancy Pelosi was asked if she supported the protesters during an interview with ABC’s “This Week” on Sunday, and she responded by claiming that there were “different reasons” for the protests, including opposition to the U.S., despite being informed otherwise.

“The protesters are protesting as I understand, this brand of protesters about the fact that that plane went down and many students were on that plane and these are largely students in the street,” Pelosi said. When host George Stephanopoulos told her that the protestors were demonstrating against their government for lying to them and that they were calling for death to Supreme Leader Ayatollah Ali Khamenei, Pelosi replied, “Well, whatever it is.”

She then went on to cite opposition to the U.S, stating that Iranians had protested against their leadership before, but that they “joined together” against the U.S. after Soleimani’s death, and that “there are different reasons why people are in the street.”

Finally, Pelosi expressed support for the protesters, saying, “Of course we would love to see the aspirations of the people of Iran realized with a better situation there.”

The so-called “Squad” – freshman congresswomen Reps. Alexandria Ocasio-Cortez, D-N.Y., Rashida Tlaib, D-Mich., Ayanna Pressley, D-Mass. and Ilhan Omar, D-Minn. – has refrained from speaking about the protests, though Omar had previously expressed support for the Iranian people after U.S. forces carried out the airstrike that killed Soleimani.

“This is an opportunity to make sure that there is a face on every single Iranian who will be impacted if we continue to escalate the situation and find ourselves in war,” Omar told a reporter.