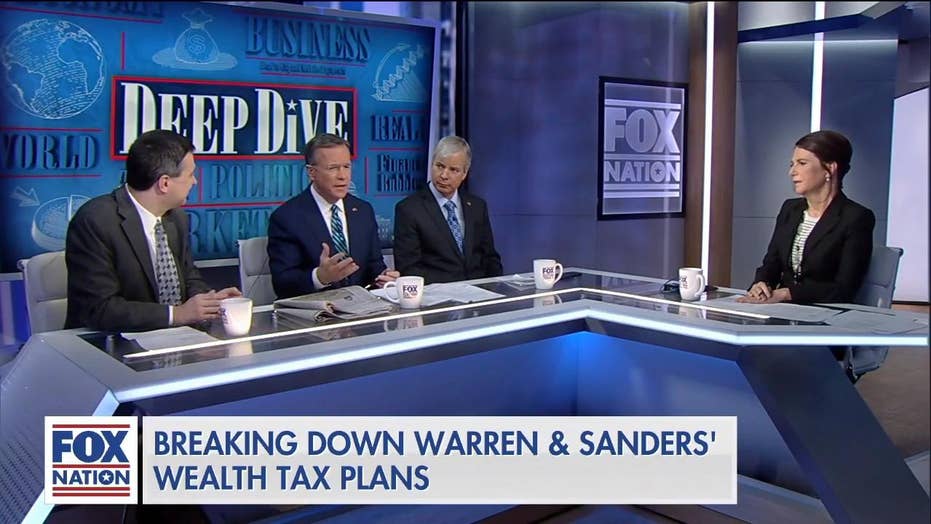 "More than a dozen people are vying for the Democratic nomination... but most of them share the same talking points. The narrative goes something like this, 'Americans are not all economically equal and we're here to fix that.' This is otherwise known as socialism," Wall Street Journal columnist and Fox Nation host Mary Anastasia O'Grady said on the latest episode of "Deep Dive."

MY PILLOW CEO SLAMS RECESSION 'FALSE NARRATIVE': 'THEY'RE GOING TO DESTROY ONE OF THE BEST ECONOMIES'

O'Grady and a panel of experts broke down some of the biggest proposals coming out of the current field of 2020 Democratic presidential candidates and how the ideas can be financed.

"Let's take Elizabeth Warren. She's promising $40 to $50 trillion in new spending over the next 10 years," said Brian Riedl, an economic policy expert and senior fellow at the Manhattan Institute.  "Let's assume $30 trillion of that can't come from the rich."

STUART VARNEY ON KEEPING HOME HEATING BILLS DOWN THIS WINTER

"According to the Congressional Budget Office," continued Riedl.  "In order to raise $30 trillion, you would need either a payroll tax of 33 percent on top of the current 15 percent payroll tax. You're looking at about a 48 percent total payroll tax."

"Are you saying that the government would take almost half of the income that your employer gives you? They would take that out even before you see that paycheck?" asked O'Grady.

"That's correct. It would go from 15.3, which it is today, to nearly 50 percent for a payroll tax. That means ... nearly half of your paycheck would be taken out in the payroll tax. And of the remaining half, you're still paying the income tax. And when you go shopping, you're going to be paying sales tax. If there's a VAT tax, you're paying that. The cumulative effect of these taxes would be absolutely enormous," said Riedl.

"You can't get the proponents of these policies to talk openly about the taxes they require," he said, "because once the American people find out what they cost, once they find out that Medicare-for-all isn't a free lunch -- support is going to collapse."

"They do talk about it," said Fox Business Network host David Asman, "but in the most dishonest way, I mean, it's like Liz Warren saying: 'Come on two pennies for a billionaire. What is two pennies?'"

Senator Warren's Democratic colleagues have called her out for not being fully transparent about the costs of the government programs that she is touting.

During the last Democratic presidential debate in Ohio, Minnesota Sen. Amy Klobuchar took Warren to task, saying: "At least [Sen. Bernie Sanders is] being honest here in saying how he’s going to pay for this and that taxes will go up. And I’m sorry, Elizabeth, but you have not said that and I think we owe it to the American people to tell them where we’re going to send the invoice.”