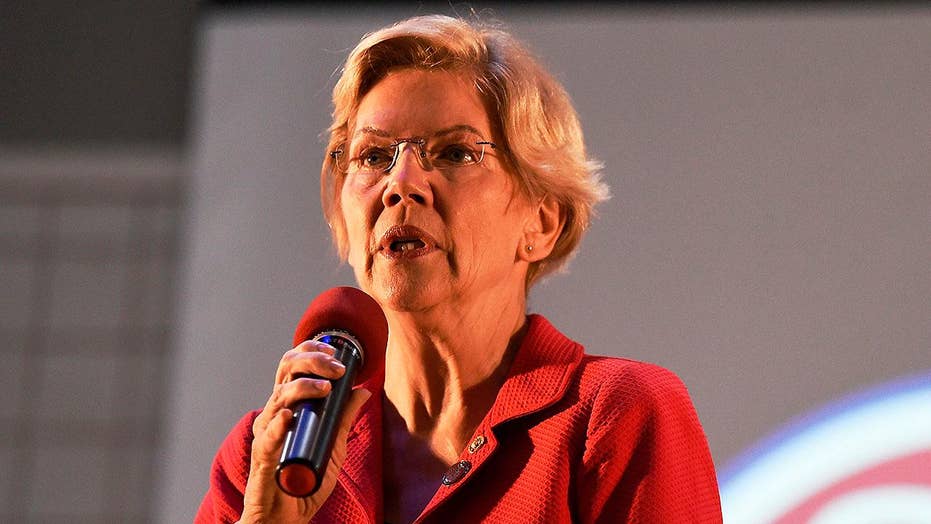 Warren gains momentum but is absence of endorsements, minority support a concern?

As Sen. Elizabeth Warren tops Joe Biden for the third time in Quinnipiac's national poll, The New York Times points out that the candidate is noticeably lacking support from big politicians outside of Massachusetts.

WESTERVILLE, Ohio – Rising in polls and facing increased scrutiny, Sen. Elizabeth Warren came under attack from two of her Democratic presidential nomination rivals at Tuesday night’s primary debate over her refusal to discuss whether taxes would go up for Americans to implement her proposal for a government-run Medicare-for-all plan.

After being asked by the moderators early at the fourth-round debate at Otterbein University whether middle-class taxes would rise under her health care proposal, the progressive senator from Massachusetts didn’t specifically answer, instead pledging that “I will not sign a bill into law that does not cut costs for middle-class families.”

Accusing Warren of being evasive, Buttigieg argued that “your signature, Senator, is to have a plan for everything— except for this. No plan has been laid out to explain how a multitrillion-dollar hole in this Medicare-for-all plan that Senator Warren is putting forward is supposed to get filled in.”

Buttigieg then touted his plan for “Medicare-for-all-who-want it,” which, unlike the Medicare-for-all proposal championed by Warren and Sen. Bernie Sanders of Vermont, would not eliminate private insurance.

But Mayor Pete counterpunched: “I don’t understand why you believe the only way to deliver affordable coverage to everybody is to obliterate private plans, kicking 150 million Americans off of their insurance in four short years.”


But then he said “it is appropriate to acknowledge that taxes will go up” before adding that “for virtually everybody, the tax increase they pay will be substantially less than what they were paying for premiums and out-of-pocket expenses.”

Asked again by the moderators if she would acknowledge what Sanders had just said, that middle-class taxes would rise, Warren answered, “What I have committed to is that costs will go down for hard-working middle-class families.”

Sen. Amy Klobuchar then joined Buttigieg in calling out Warren.

The Minnesota Democrat said that “at least Bernie’s being honest here in saying how he’s going to pay for this and that taxes will go up. And I’m sorry, Elizabeth, but you have not said that and I think we owe it to the American people to tell them where we’re going to send the invoice.”

Suggesting that Warren would never be able to pass her Medicare-for-all plan through Congress, Klobuchar said "the difference between a plan and a pipe dream is something that you can actually get done."

Biden also chimed in, jabbing at Warren without naming her, accusing her of not being straightforward.

"On the single most important thing facing the American public, I think it's awfully important to be straightforward with them," Biden noted. "The plan is going to cost at least $30 trillion over 10 years. That is more on a yearly basis than the entire federal budget."

And he charged that under the Sanders and Warren plan, "if a fireman and a schoolteacher are making $100,000 a year, their taxes are going to go up about $10,000. That is more than they will possibly save on this health care plan.  We have a plan put forward that will work."