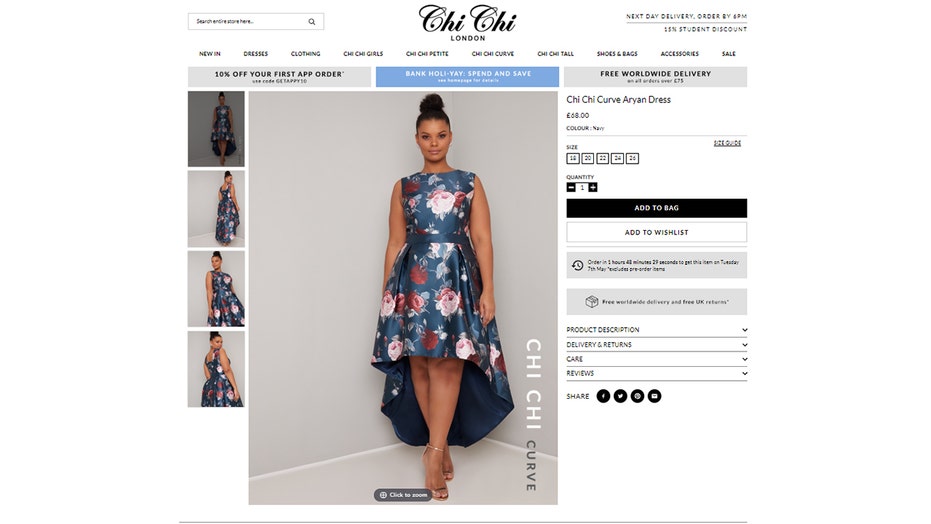 Probably not the reaction this woman was hoping for.

An anonymous wedding guest posted in a forum on Mumsnet about a dress she was considering wearing to the big event.

The woman said she was having second thoughts about the dress she chose, which she said she was planning on wearing with flats, feeling it might look as if she trying to “upstage” the bride.

VEGAN WEDDING GUEST SHAMED FOR BEING 'RUDE,' BRINGING HER OWN FOOD

“Everyone I’ve asked (6 people) says it’s fine and I should definitely wear it but if I were the bride, I feel as though I’d think whoever wore it was trying to steal the limelight,” she wrote in the post, along with a photo of the intended hi-low style floral dress.

The woman said she was having second thoughts about the dress she chose, which she said she was planning on wearing with flats, feeling it might look as if she trying to “upstage” the bride. (Chi Chi)

However, those who responded to the woman’s post did not share her flattering view of the garment and slammed the frock as “horrible.”

“It's awful! Sorry,” one person ridiculed.

“Agree - horrible dress. I don’t think that would upstage the bride at all,” another added.

“I think it’s an awful style so I wouldn’t wear it,” one person anonymously wrote.

“I suppose it depends what the bride looks like, but I’d be pretty gutted if that could upstage me! Not something I’d chose to wear myself,” another person piled on.

“It's not to my taste at all, I think it's really ugly. Not sure how it would look like an attempt to upstage the bride!” one shared.

Not everyone hated the dress, though, and told the woman she should go for it.

“I definitely don’t think it would upstage the bride. It looks like a fairly standard wedding guest dress to me (in a nice way - I do like it),” one person wrote.

“I think it is lovely and you could wear it,” another complimented.

“I think it's lovely and perfectly suitable for a wedding,” another wrote.

However, some who did not have strong objections to the dress still felt the woman should not wear it if she thought it was an attempt to show-up the bride.

“If you think it don’t wear it,” one person offered.

“Why ask if that’s how you already feel?” another wrote.

“If you think that why would you wear it?” another asked.

Despite many negative reactions, at least most all who commented felt the dress would not upstage the bride.