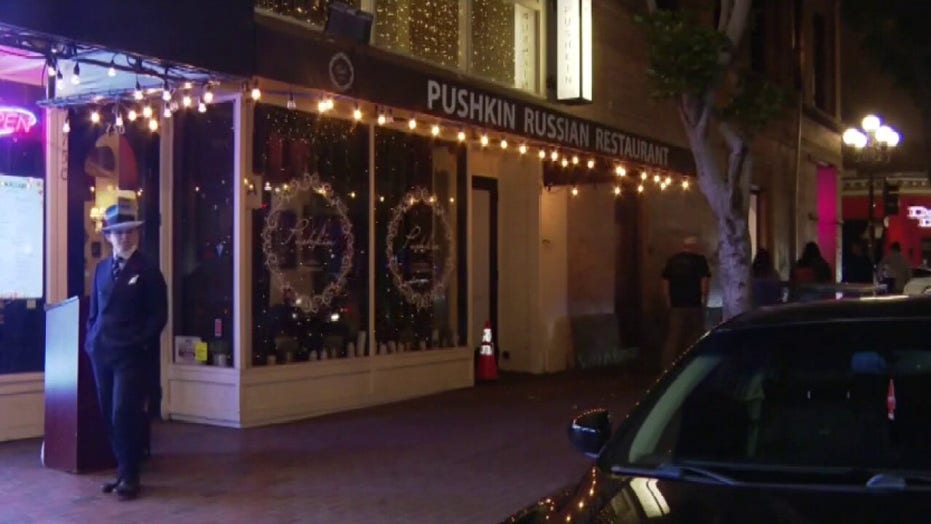 Russian Samovar restaurant owner Misha Von Shats tells Laura Ingraham his message is do not vilify anything that is Russian — they did not cause this war. This is Putin’s war.

The Ukrainian co-owner of a Russian restaurant in New York City is speaking out about the hate his restaurant has received since Russia invaded Ukraine last month.

Alan Aguichev and his mother, Svetlana "Sveta" Savchitz, opened a restaurant in the West Village of Manhattan just before the pandemic started two years ago.

Though Savchitz was born in Kharkiv, Ukraine, she and Aguichev decided to market their restaurant — named Sveta after Savchitz — as a modern Russian and European restaurant, Aguichev told Fox News Digital.

"We listed ourselves as modern European, modern Russian," Aguichev told Fox News Digital. "The reason is because people just have a better understanding of what they’re eating."

The restaurant started receiving emails and then phone calls with people saying, "Go back home" and "F— Russia."

That strategy backfired when Russia invaded Ukraine on Feb. 24.

Aguichev said the restaurant started receiving emails and then phone calls with people saying, "Go back home" and "F— Russia."

Alan Aguichev and his mother, Svetlana "Sveta" Savchitz, opened a restaurant in the West Village of Manhattan just before the pandemic started two years ago.  (Marsha Owett/owett studio)

"People were under the assumption that we’re Russian," Aguichev said. "And even if we were, let’s just say we were — it really shouldn’t matter. And if you ask me, it’s not like Russian people want this war."

"It was kind of upsetting, in the beginning, to receive these emails because we have family in Ukraine at the moment, who are just hiding," Aguichev added.

Savchitz moved to the U.S. from Kharkiv in 1993, according to the Sveta website. Aguichev said that his mom has two sisters who are still in Ukraine, along with several other relatives who are staying together during the Russian invasion.

At the beginning of the war, many of Aguichev’s relatives were hiding out in train stations, Aguichev said.

Savchitz moved to the U.S. from Kharkiv in 1993, according to the Sveta website. Aguichev said that his mom has two sisters who are still in Ukraine, along with several other relatives who are staying together during the Russian invasion. (Aranka Media Enterprise/aranka_media)

"I have two cousins in the war right now, fighting," Aguichev said. "I’ve got aunts and uncles who are … they’re at that age where they’re not leaving. They’re just going to stay there and just ride it out."

Aguichev said that he and his mom send money and call their relatives in Ukraine regularly, though sometimes they don’t answer right away.

Then Aguichev and his family start to look through news reports in their area in case something happened to their loved ones — until the Ukrainian relatives call back.

That stress is on Aguichev’s staff, too, he said.

"All my staff on the floor, all my servers, they’re all from Ukraine except for one guy," Aguichev said.

Aguichev said that the stress of worrying about his family in Ukraine has outweighed any distress from the hateful phone calls and emails they've received.

"Even if we were Russian, it doesn’t mean we’re for this war."

"They don’t really phase me, because I’ve got other things to worry about," Aguichev said. "Don’t get me wrong: If I was getting vandalized, if I was getting rocks thrown, that’s something I would obviously have a concern about. But that’s not happening, thank God."

Though Sveta has avoided vandalism, other Russian restaurants around the U.S. haven’t been so lucky.

Other Russian businesses have also been impacted, according to the Associated Press.

A Russian bakery in Seattle reportedly received a call from someone threatening a terrorist attack.

As for Russian restaurants, some in New York City are seeing numerous reservation cancellations and have struggled to fill tables, FOX Business previously reported.

Aguichev said that thankfully, customers have continued to come to Sveta.

'Even if we were Russian, it doesn’t mean we're for this war'

Since Russia invaded Ukraine, Sveta has removed references to Russia from its description — which now just says "Modern European Cuisine" — and from its menu, though the food is still the same and the staff is the same.

"It's a constant worry … It's just constant stress."

"There were some Russian names in our menu," Aguichev said. "For example, we had Russian borscht, Russian sushi. We changed that and we put Ukrainian borscht, Ukrainian sushi. Why? So we don’t get any of those hateful messages, hateful phone calls."

UKRAINIAN EXCHANGE STUDENT IN COLORADO, AGE 16, IS ‘PROUD’ OF HIS COUNTRY AMID RUSSIA-UKRAINE WAR

"Both cuisines there are exactly the same," Aguichev added. "The only difference is the person who’s cooking it."

In a Facebook post, the restaurant staff wrote about the relationship between the Russian and Ukrainian people and how the restaurant is "devastated by the tragic events taking place in our homeland."

"We have plenty of Russian relatives and friends, we just don’t agree with the Russian president and his actions," the Facebook post said.

"Our backgrounds are similar, our cuisine is similar, we are and always will be family."

"I want people to understand the correct message, which is just spread love … The whole world needs that right now."

"We are praying for peace and for this war to come to an end," the post continued.

"Our prayers are with Ukraine and our prayers are for Russian citizens who are getting a lot of hatred towards them in these times. Our motto at Sveta has and always will be family first, and that’s what we all are."

Aguichev also told Fox News Digital that despite some similarities between the countries, Ukraine is still independent of Russia. But that doesn’t mean that Russian business owners deserve hatred.

"Even if we were Russian, it doesn’t mean we’re for this war," Aguichev said. "I have a Russian server … He thinks this is absolutely crazy, what’s going on."

Aguichev told Fox News Digital that on Monday, he planned to donate Sveta’s earnings for the day to UNICEF, which is helping to protect children in Ukraine.

He also encouraged people to "spread peace, spread love" and to donate to help Ukraine, if possible.

"I want people to understand the correct message, which is just spread love," Aguichev said.

"The whole world needs that right now," he added. "Nobody needs any type of negativity."