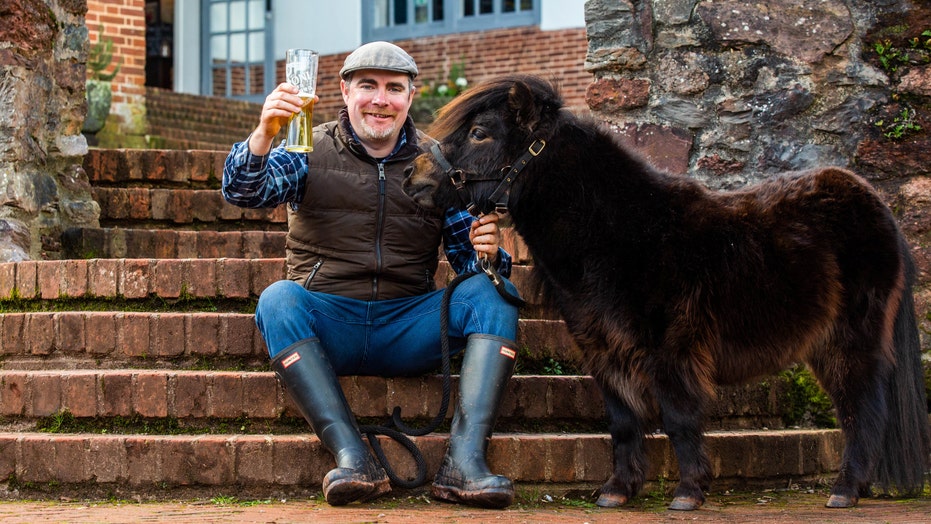 A miniature Shetland pony born on St. Patrick's Day has become a regular at his local pub and pops in daily for a Guinness.

Stout-loving equine Patrick, aptly named as he was born on March 17, often turns heads during visits to the bar with his owner, Kirk Petrakis. Petrakis, 42, said his four-hoofed friend stands calmly at the bar at the Drum Inn, where he enjoys his daily tipple of Guinness.

He's even served a carrot as his pub snack of choice.

Patrick has become such a familiar face in the village pub, located in Cockington, in Devon, England, that a special second birthday party will be held this month.

"The daily pub visit is all part of his routine and is his highlight. He likes a sip of Guinness and he has a carrot — that's it," says Petrakis. "It's a special treat for him. We decided on Guinness as he was born on St Patrick's Day. It also has some nutritional value for him. He just has a few sips — nothing too heavy."

"The daily pub visit is all part of his routine and is his highlight. He likes a sip of Guinness and he has a carrot — that's it," says Kirk Petrakis of his pet pony Patrick.

Petrakis has looked after Patrick for about three months, and said as soon as he got him, he took him around Cockington and went into the local tea room with him.

"Now we take him daily into the Drum Inn. It is all part of his training to get him to desensitize to all the sounds in a busy pub atmosphere, but he absolutely loves it there. He is doing extremely well. People can not believe their eyes when they see a horse in the pub. He gets a big reaction there and on social media," Petrakis said.

"The first trip went down really well. I did say to the manager of the Drum Inn beforehand what we were planning so he was fully aware. He was fine with it. It is a dog pub, so he was happy for us to bring Patrick in… People were coming over taking photos and lots of children enjoyed meeting him.

"He loves being in the pub and he really loves all the attention."

Patrick is owned by Petrakis and his wife Hannah, 36, who run K&H Cockington Carriages together. The couple also has three children who "adore" their pony pal.

"He normally goes to the pub in the day but was there during an evening for my wife's birthday, when things sometimes get rowdy. But he remained as good as gold and stood very chilled and relaxed. The younger lads were saying things like, 'Oh my God, I can not believe there is a pony in the pub.'"

Petrakis started taking Patrick to The Drum Inn in Devonas soon as he got him three months ago. (SWNS)

Petrakis said that some of the other patrons sometimes get concerned that the beer Patrick drinks might be too strong, but Patrick never gets wild.

"Patrick is always on his best behavior though and is very docile. He has never had to be kicked out and is a lot better behaved than some of the dogs. He is quiet and just brings a calming presence," Petrakis said.

Petrakis added that he'll likely continue to bring Patrick to the pub for another year before he's put to work pulling a miniature carriage for children. He might also be used for therapy and visiting schools and hospitals.

Before then, though, he's going to enjoy a big birthday bash at the pub.

Patrick, who was born on St. Patrick's Day in 2018, will celebrate his second birthday at the pub.

"He is going to be two this St Patrick's Day, and we are having a birthday party for him in the pub. There will certainly be plenty of Guinness flying around that day."