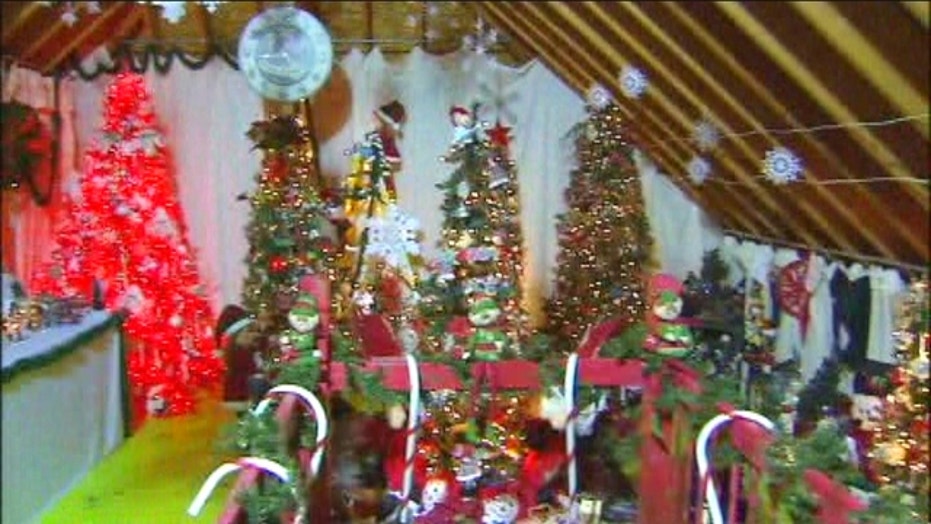 Woman Has 277 Christmas Trees In Her Home

Woman displays holiday spirit with 277 Christmas trees inside her home.

LOTHIAN, Md. – She doesn't sell tickets. In fact, hardly anyone even knows about it. But a Maryland woman is putting on quite a holiday show, and it's all inside her house.

You might say Renetta Zanco's love of Christmas has snowballed. She has a lot of Christmas trees. 277 of them, to be exact.

How many trees are in her bathroom?

Of course one is made of toilet paper rolls. There is even one in the shower!

“It's not like I am keeping somebody from taking a shower or anything because it's only me and my husband here,” Zanco said.

It started about 20 years ago as a competition between Zanco and her sister, who lives in Oklahoma.

“Each year, she would call me up and say, 'How many trees did you put up?’ And then, of course, I would have to outdo her,” explains Zanco. “So I would call her back and say I've got two more then you do. Then she would call me back the next year [and say], ‘Well, I’ve got five more,’ and it started out like that.”

Did she beat her sister?

There are trees that bubble and trees in tubs.

We asked how she dusts. She says “carefully.”

One tree has spoons from all over the world, including one from Santa Claus, Ind.

When she went for a visit up there, she said, “I was a little bit disappointed because I think I had more trees than they did.”

Zanco worked weekends for a while at a Christmas shop.

“I was just in it for the discount because after Christmas, they always have a sale,” she said.

The setup of the trees is a lot of work.

Luckily her husband helps out, most of the time.

“He won't let me in the basement,” Zanco said. “The basement is off limits.”

But the attic is not. She has a display of Santa’s workshop there. It is an entire attic glistening with holiday merriment.

“Well, I had one friend say it looked like Macy's department store,” she said.

Her grandson said, “The only thing I'm grateful for is I don't have to put them up.”

That is grandma's job. She will be done putting them away by February.

For more stories go to myfoxdc.com