How do you both reveal your baby’s gender and wake up an entire neighborhood? Fly a helicopter over a large fountain in your backyard.

Expectant parents Adriana Jirjis-Alsaigh and Samar Alsaigh were at Adriana’s parent’s house in Macomb Township, Mich., last month, celebrating the soon-to-be birth of their first child and to learn the gender.

The couple, who told the Detroit News that it was their family who planned the Aug. 31 gender reveal, said they thought it was going to be a “small” event, as there was a large blue-and-pink cardboard box on the lawn, decorated with a giant heart.

"At first we opened up an empty box and kept hearing this noise like a helicopter," Adriana told the Detroit News.

That noise, which the married pair initially dismissed, persisted, and when no balloons or anything revelatory popped out of the box, Adriana and her husband noticed the helicopter sound was getting louder and closer.

The 25-year-old told the local news outlet that she and Samar watched as the aircraft lowered to the water — this time thinking something might pop out of the pond – until blue smoke began shooting out from the helicopter.

"I actually thought it was a girl, but everyone else, including my husband, thought it was a boy and were extremely happy," Adriana said, noting that her son will be the first grandchild in both her and her husband’s families.

"I thought we were going to do something small at the house, but my dad always goes above and beyond."

According to the outlet, Adriana’s family planned the reveal when she was at 24-weeks, wanting to celebrate in a major way.

However, some on social media have slammed the video after it appeared on the Barstool Sports Instagram page, with one calling it “pathetic.”

“Wow how much did this cost? What a waste,” one person wrote.

“Or you could just say 'it’s a boy' and not blow the [kid's] entire college fund on renting a helicopter for 3 seconds,” another wrote.

“This is so pathetic,” one commented.

“People got too much money,” another wrote.

"Imagine having so much money that you can afford to rent a helicopter AND have a baby," someone else joked. "Wild."

Despite the negative reaction, the family seemed excited by the news, as several of them can be seen jumping up and down in the video. 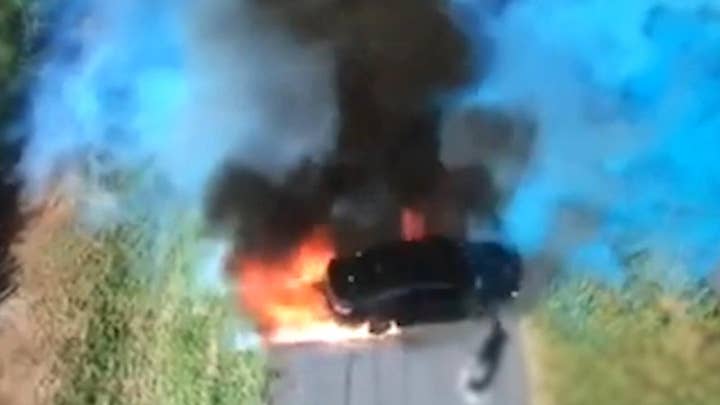 Recently, another couple was slammed over a gender reveal, which used the help of a hippo at the zoo. Many on social media were upset that the parents threw a watermelon filled with colored Jell-O into the hippo’s mouth, claiming the pair were feeding the animal chemicals.