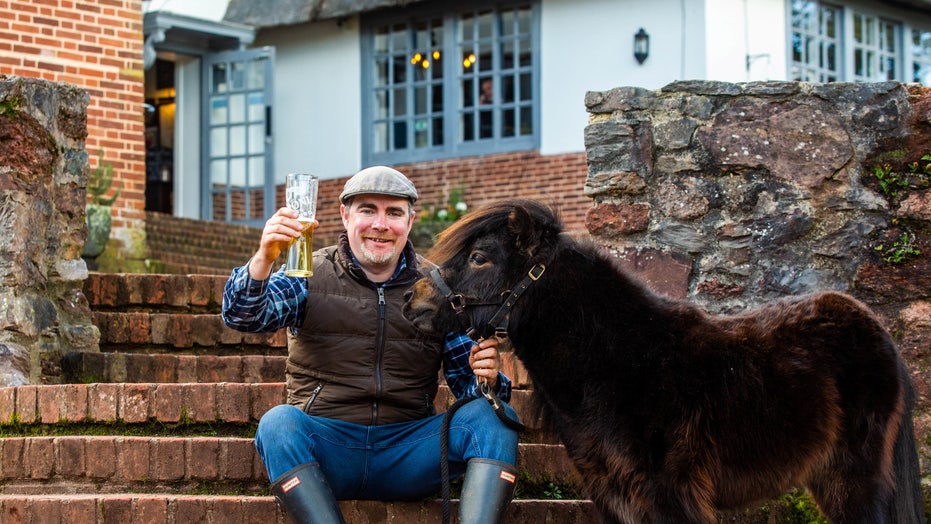 A Guinness-loving miniature pony in England was “devastated” after the coronavirus led to the cancelation of his boozy birthday party at the local pub -- so he held an impromptu celebration outside.

Around 100 people were scheduled to attend a village pub to mark the second birthday of the stout-loving Shetland on St Patrick's Day. But the four-hoofed drinker, aptly named Patrick, as he was born on March 17, was kept away by his owners after Prime Minister Boris Johnson warned against mass gatherings in pubs.

Around 100 people were scheduled to attend a village pub to mark the second birthday of the stout-loving Shetland named Patrick, pictured, on St Patrick's Day. (SWNS)

Instead, Patrick held a small party for close family in a yard close to the Drum Inn, but was still able to enjoy several sips of his favorite drink. His owner Kirk Petrakis said it was disappointing for the crowds — and Patrick — but said he had to put safety first.

“Boris Johnson had said the night before for people to be careful. The original plan was to have it in the pub and it was all decorated for St Patrick's Day with flags made for him,” Petrakis explained. "Patrick had a few presents from local suppliers who wanted to wish him a happy birthday and the pub was expecting about 100 people especially for his celebration.”

Instead, Patrick held a small party for close family in a yard close to the Drum Inn — but was still able to enjoy several sips of his favorite drink. (SWNS)

"But when Boris said what he said we thought it was best to be safe rather than go ahead with Patrick's birthday inside with a large gathering. People were very disappointed and so was Patrick, but they understood why,” he continued. “We did it in the yard which is just a short distance away from the pub.

"It was just a small family gathering in the end," said Patrick's owner Kirk Petrakis. (SWNS)

Petrakis, 42, said Patrick has become something of a celebrity since a story about his daily trips to the pub emerged. Patrick is a regular sight standing calmly at the bar and even has a carrot as his pub snack of choice.

He has become such a familiar face in the village pub at Cockington, Devon, that “This Morning” sent presenter Alison Hammond down for his birthday party.

"A lady had traveled 300 miles to see him on his birthday. She saw him on the news and just fell in love with him. He brings a smile to everyone's faces at such a hard time,” the owner claimed. "We heard about her and got Patrick out into the yard so she could meet him before she left.

Patrick has become something of a celebrity since a story about his daily trips to the pub emerged, his owner says. (SWNS)

"That is the effect he has on people and my goal is he will eventually act as therapy and visit schools and hospitals,” he said. "We are taking a lot of pictures of Patrick and putting on social media - people just melt to it. He has become a celebrity."

Petrakis has looked after Patrick for about three months and said as soon as they got him, they took him around Cockington and initially went into the local tea room with him.

"My goal is he will eventually act as therapy and visit schools and hospitals,” said Petrakis. (SWNS)

"Now we take him daily into the Drum Inn. It is all part of his training to get him to de-sensitize to all the sounds in a busy pub atmosphere - but he absolutely loves it there,” he said. "He is doing extremely well. People cannot believe their eyes when they see a horse in the pub."

Patrick is owned by Petrakis and his wife Hannah, 36, who run K&H Cockington Carriages. The couple has three children who “adore” their pony pal.