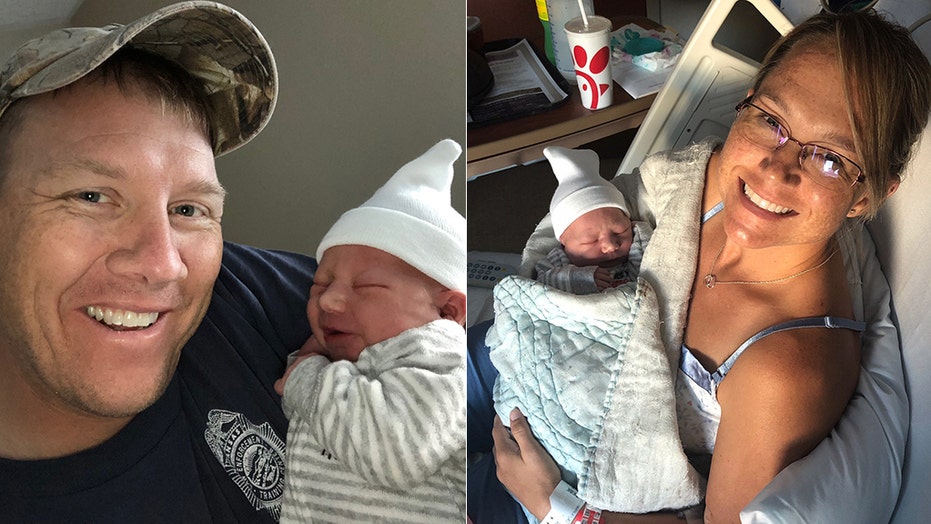 A South Carolina dad was on a three-day leave from his Navy duties when he prayed that he’d be able to play a role in his fourth child’s birth. Little did he know that he’d actually end up catching the newborn while racing his wife to the hospital.

Millerbernd, a Navy Master at Arms, was racing toward the hospital with his wife when her water broke. (East Cooper Medical Center)

On Aug. 9 at around 2 a.m., Rob and Nikki Millerbernd were en route toward East Cooper Medical Center when her water broke in the front seat.

“I called 911 to tell them what was going on,” said Millerbernd, a Navy Master at Arms, according to the hospital’s Facebook page. “They told me they would send an alert to the officers with the car description. I had my caution lights on and ran a red light.”

He said he pulled off the road just in time to catch his son, Wyatt, who weighed 7 pounds, 3 ounces. (East Cooper Medical Center)

But before they could make it to the hospital, Millerbernd pulled over just in time to catch his son, Wyatt, who was born at 2:34 a.m. After hearing him cry, he put the car back in drive and the three continued to the Mt. Pleasant hospital, where medical staff evaluated Nikki and Wyatt, and then let Mellerbernd cut the umbilical cord.

“Finally got my boy,” Mellerbernd said of his son, who weighed 7 pounds, 3 ounces, and joins the couple’s three older daughters, Hayleigh, Eliza and Natalie. According to the report, Nikki Millerbernd had been scheduled to be induced later that day.

Mellerbernd has since returned to Virginia for training, the hospital said, and will be back home with his family in September before his upcoming October deployment.