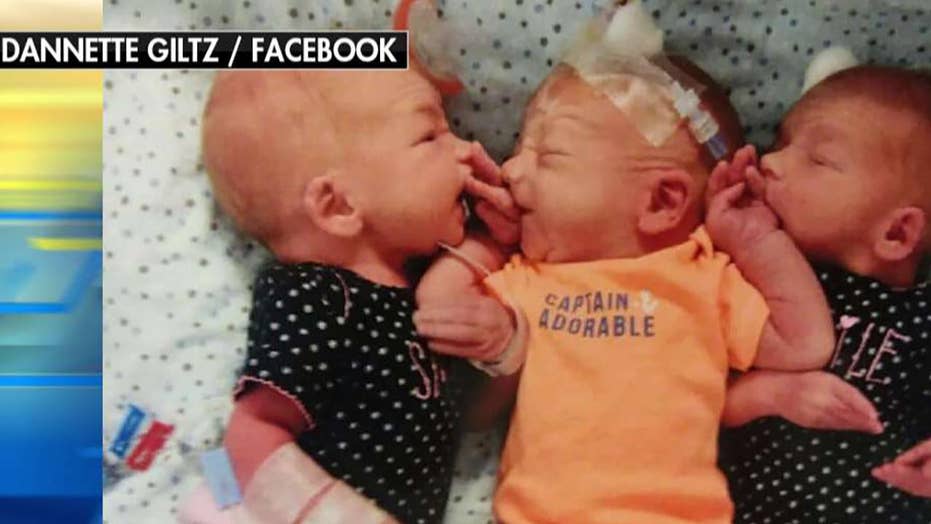 The woman gave birth to triplets after having no idea she was pregnant. She mistook labor for kidney stones.

A South Dakota mother was shocked to find the painful kidney stones she had been experiencing was actually her going into labor — and the surprise birth of triplets.

Dannette Giltz, already a mother of two, said she was rushed to the hospital on Aug. 10 because of pains.

"I figured it was kidney stones because I've went through them before," she told KOTA, not realizing she was 34 weeks pregnant.

But a doctor told her she was going into labor, and that she should expect to have a newborn set of twins. While her husband, Austin, was contemplating what to name their new babies, someone at the hospital asked for a third blanket — indicating a third baby would soon be born.

"His reaction is like, ‘Excuse me, put it back, no, I was told I have twins, I'm not doing triplets,'" Giltz said of her husband. "She's like, ‘No, there's three babies in here, there are triplets.'"

The babies — two girls and a boy named Gypsy, Nikki and Blaze — were born within four minutes of each other, and each weighing around 4 pounds.

"You don't ever see triplets being conceived naturally, let alone going 34 weeks without knowing," she said. “I go to the doctor's thinking I'll have surgery for kidney stones and end up going into labor with a C-section that night. It's crazy.”

The happy couple said they're thankful for their family and friends, and strangers who donated supplies to them.