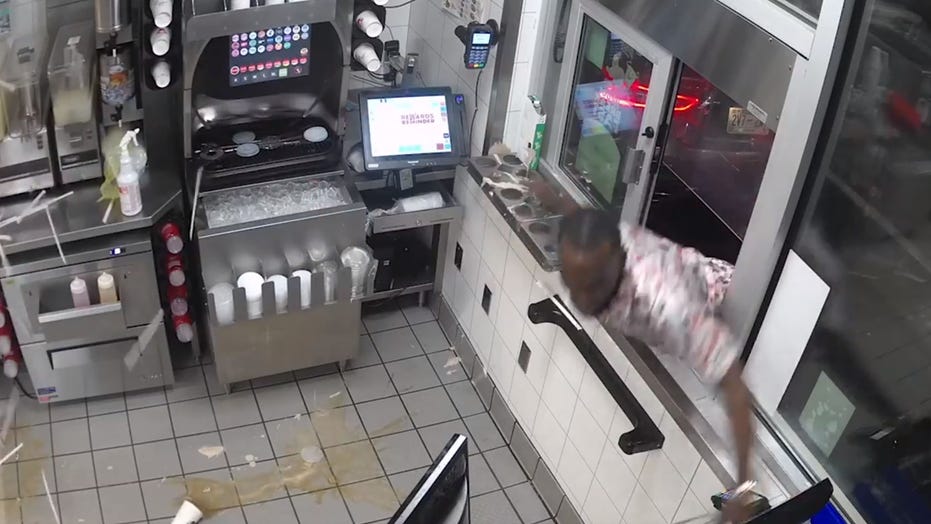 Video footage released of an incident that occurred at a Wendy’s in Tampa, Florida, on Sunday shows a customer climbing through the restaurant’s drive-thru window, throwing various items at workers and attempting to also grab the cash drawer -- which he is forced to drop as employees respond to the drama.

The Hillsborough County Sheriff’s Office shared footage of the incident on Facebook. The suspect has been identified as 26-year-old Kelvin Barnes, according to the post.

In the footage, it appears that there are several other young men in the car with Barnes, watching the incident unfold. One of them appears to try and push Barnes away from the window after Wendy’s employees shut him out.

“A Wendy’s employee told deputies Barnes and his unidentified passengers became belligerent while placing their order and got out of their car,” the Hillsborough County Sheriff’s Office wrote on Facebook. “This surveillance video shows Barnes reaching in the Wendy's window to throw things and grab the cash drawer. Barnes ended up dropping the cash drawer and leaving in a gray 2020 Nissan Maxima with a Tennessee plate.”

Police later added that the vehicle was a rental, and the rental company is currently filing a "failure-to-return report" with the Tampa International Airport's police department. "Barnes has a Georgia driver’s license and no known local address," police added.

Employees at the restaurant said they did not know why Barnes became belligerent while placing his order, Fox 13 reports.

Authorities are still searching for the suspect.