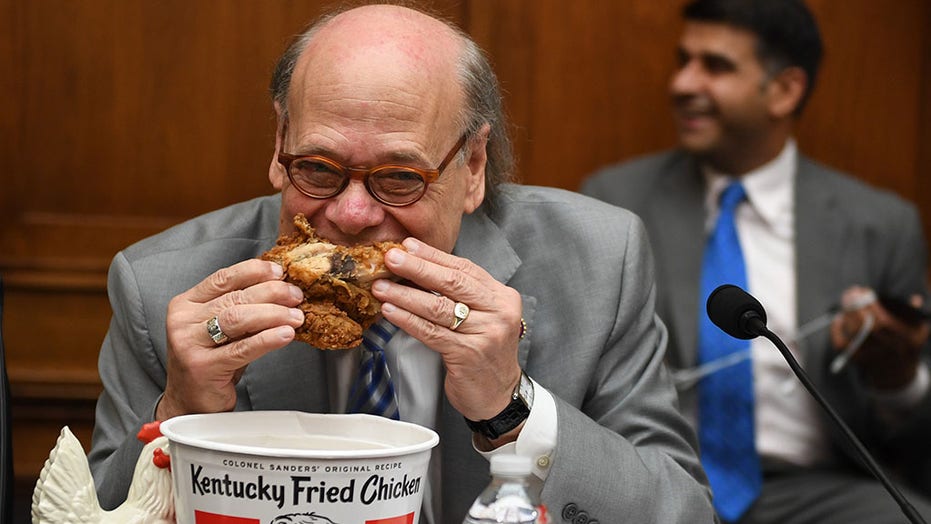 House Judiciary Committee Chairman Rep. Jerry Nadler says the average person is not allowed to ignore a congressional subpoena so neither should Attorney General Bill Barr.

A Tennessee congressman seized an opportunity to chow down on some Kentucky Fried Chicken at 9 a.m. Thursday while taking a jab at Attorney General William Barr.

Rep. Steve Cohen, D-Tenn., showed up on Capitol Hill with a bucket of fried chicken and a ceramic chicken statue on Thursday to mock Barr for being “too chicken” after the attorney general did not appear for his scheduled hearing before the House Judiciary Committee. Barr was expected to testify on his handling of Special Counsel Robert Mueller's Russia report.

Cohen sat down with his ceramic chicken statue and bucket of KFC and began eating a large piece of fried poultry as lawmakers filed into the room. A video showed him offering some fried chicken to another woman.

After finishing up his odd breakfast, Cohen placed the bucket and chicken statue on the witness desk, where Barr would have been seated and stood there for a moment as photographers captured the moment.

“Chicken Barr should have shown up today and answered questions…this man was picked to be Donald Trump’s fixer. The Black Sox look clean compared to this team,” Cohen told reporters while holding the statue. "It's a sad day in America.”

Rep. Steve Cohen, D-Tenn., placed a prop chicken on the witness desk for Attorney General William Barr after he does not appear before a House Judiciary Committee hearing on Capitol Hill in Washington. (AP)

The chicken may have perhaps been cold leftovers, seeing as most KFC locations in Washington, D.C., open at 10:30 a.m., although the chain’s store at The Pentagon shows it opens at 6 a.m. on the weekdays.

Barr testified for hours on his handling of the Mueller report before the Senate Judiciary Committee on Wednesday. He did not show up Thursday to the hearing on the House side amid a disagreement over the terms for his appearance.

Following Cohen's stunt, the hashtag #ChickenBarr became a trending topic on Twitter and already inspired one user to create a handle under the same name. Cohen retweeted several videos and reports about the incident and replied to a producer who asked why he brought the bucket of chicken to the hearing.

"Why is this hearing different from all other hearings?" Cohen responded to the tweet.