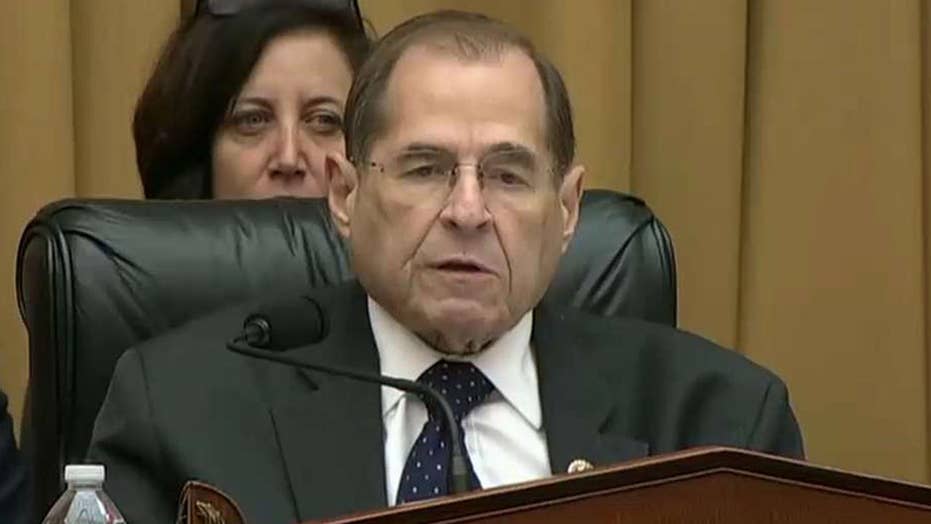 House Judiciary Committee Chairman Rep. Jerry Nadler says the average person is not allowed to ignore a congressional subpoena so neither should Attorney General Bill Barr.

House Judiciary Committee Chairman Jerrold Nadler vowed a "reckoning" Thursday after Attorney General Bill Barr boycotted a scheduled hearing before the panel, speaking in grave terms as he likened President Trump to a dictator and threatened the Justice Department leader with contempt.

Nadler, D-N.Y., spoke at what was slated to be a hearing for Barr to testify on his handling of Special Counsel Robert Mueller’s report. Barr, who testified for hours on the same topic a day earlier on the Senate side, did not show up amid a disagreement over the terms for his appearance in the House.

Nadler -- at a bizarre session complete with an empty chair for Barr where one Democrat placed a prop chicken -- lashed out at both Barr and Trump, who has vowed to fight all subpoenas amid an escalating confrontation with Congress over an array of investigations. Barr himself has not been subpoenaed, and it's unclear whether Democrats might take that step, but his DOJ has refused to comply with a subpoena for the full Mueller report.

“The president of the United States wants desperately to prevent Congress from providing any check whatsoever on even his most reckless decisions,” Nadler said Thursday. “The challenge we face is that if we don’t stand up to him together, today, we risk not being able to stand up to any president in the future.”

Nadler then slammed Barr, saying he has “failed” to do his job. 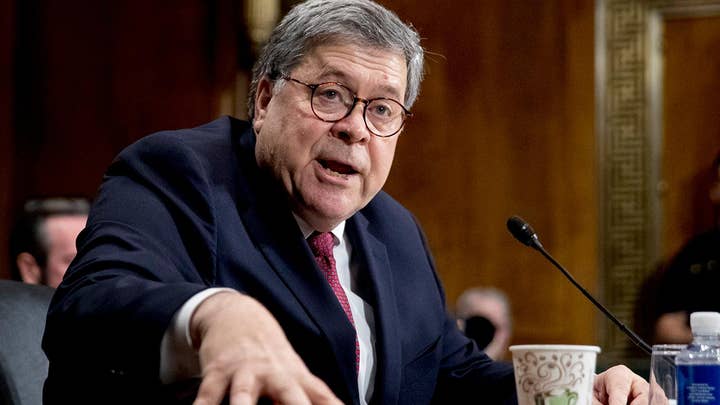 Nadler said committee Democrats would “continue to negotiate for access to the full report.”

“And yes, we will have no choice but to move quickly to hold the attorney general in contempt if he stalls or fails to negotiate in good faith,” Nadler said, adding that “we should stand up to this president,” and should not “let the moment pass us by.”

“We’ve seen in other countries what happens when you allow such moments to pass by,” Nadler said.

He added: “We’re not getting that opportunity today because the stunt and circus continues over here.”

Nadler and Collins delivered their opening remarks to an empty chair Thursday, representing where Barr would have sat. Rep. Steve Cohen, D-Tenn., who showed up with a KFC bucket and was seen enjoying the fried chicken, left a prop chicken by that chair.

Rep. Steve Cohen, Democrat of Tennessee, eats chicken during a hearing before the House Judiciary Committee on Capitol Hill in Washington, DC, on May 2, 2019. (Photo by Jim WATSON / AFP) (Photo credit should read JIM WATSON/AFP/Getty Images)

The committee was informed late Wednesday that Barr would not testify at the planned hearing, even as Democrats who lead the committee threatened a possible contempt citation against him.

Barr’s decision not to appear before the committee as scheduled came as Democrats decided that their committee staff, rather than only members of Congress, would question Barr on his handling of Mueller’s report. Justice Department officials said members should conduct the questioning, and said it was unclear why Democrats did not propose having staffers simply provide questions to the members during the hearing.

White House Press Secretary Sarah Sanders on Thursday called it “pathetic” that Democrats tried to have staff attorneys question Barr, adding that if Nadler is “not capable of asking the attorney general questions, then maybe he should step down or resign.”

“Chairman Nadler’s insistence on having staff question the Attorney General, a Senate-confirmed Cabinet member, is inappropriate. Further, in light of the fact that the majority of the House Judiciary Committee – including Chairman Nadler – are themselves attorneys, and the Chairman has the ability and authority to fashion the hearing in a way that allows for efficient and thorough questioning by the Members themselves, the Chairman’s request is also unnecessary,”  Kupec said in a statement late Wednesday. “The Attorney General remains happy to engage directly with Members on their questions regarding the report and looks forward to continue working with the Committee on their oversight requests.”

It is unusual for committee staff and committee counsels to question a witness—especially a high-ranking Cabinet official like the attorney general.

The standoff between Barr and the House Judiciary Committee comes a day after a heated hearing before the Senate Judiciary Committee. The hearing covered everything from Barr’s decision not to pursue an obstruction of justice offense against President Trump, to process delays in transmitting a redacted version of Mueller’s report to the public, to Mueller’s concerns about how Barr initially relayed his findings to Congress.

The Washington Post first reported, in a late-breaking article Tuesday night, that Mueller had penned a letter to Barr and spoken to him over the phone on March 27, expressing concerns about his initial report summary and saying the media had “misinterpreted” the results of the investigation concerning obstruction of justice.

Barr, on Wednesday, called Mueller’s comments “a bit snitty,” and said the situation was “mind-bendingly bizarre” political theater, given that the report has been released to the public already.

The Mueller report itself said the investigation did not find evidence of collusion between members of the Trump campaign and Russia in the 2016 presidential election. Mueller also led an obstruction of justice inquiry into the president but did not come to a conclusion on the matter. Barr determined the evidence found in the investigation was not sufficient to charge the president with an obstruction of justice offense.

Democrats have blasted Barr for redacting the report, and are calling for the release of the full report, without redactions, for their review. Barr has already offered to make the report, with fewer redactions, available to certain members of Congress.