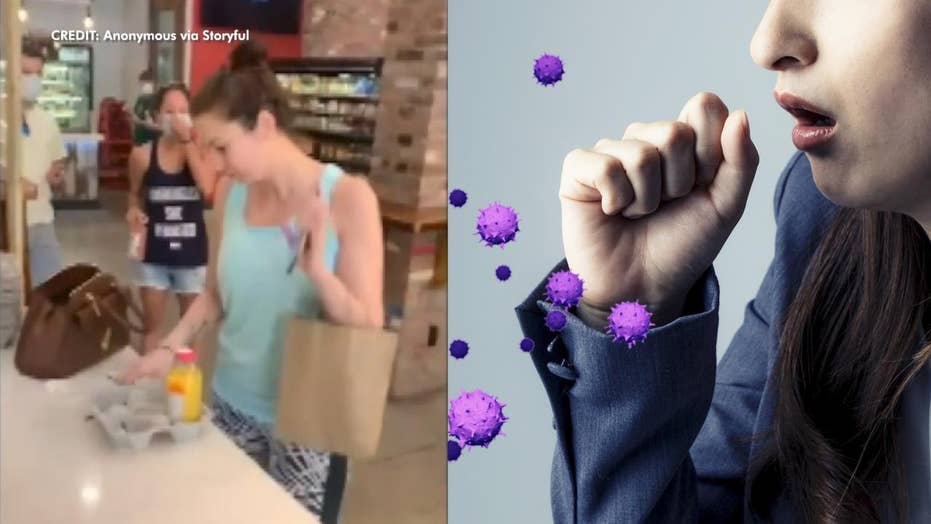 'We apologize for the horrific behavior of this woman,' the bagel shop wrote in response to the viral video.

Would you like a shmear of phlegm with your bagel?

A bagel shop customer in New York City is going viral for all the wrong reasons after she was filmed intentionally coughing on another patron who called her out for not wearing a mask amid the coronavirus pandemic.

RELATED: LET'S ALL LOOK BACK AT THE 'BAGEL BOSS' GUY

The maskless woman — whom TMZ has already dubbed “Coughin’ Karen” — was spotted last week at the New York Bagel Coffee House in Astoria, Queens, according to a Facebook post from Ally Goodbaum, the unfortunate customer who ended up being the unwilling recipient of the maskless woman’s germy wrath.

According to Goodbaum, the maskless woman had already been coughing inside the store and “not covering her mouth,” so Goodbaum informed an employee. But ‘Karen’ allegedly overheard Goodbaum’s complaint, and began berating her from across the shop, claiming she already had antibodies and “doesn’t need to wear a mask in public.”

In the video, the maskless woman is seen yelling at a fellow patron before intentionally coughing on her. (Storyful)

Once "Karen" gets her order, she then marches over to where Goodbaum is standing and intentionally coughs in her direction multiple times.

“What the f--- is wrong with you?” Goodbaum shouts back.

The footage soon made its way to social media, where users quickly identified the cougher as yet another "Karen" — a mocking term that is often used to describe a white woman who displays entitled or racist behavior.

Goodman later recounted the incident on Facebook, to express her “disappointment in humanity,” and also to warn her neighbors about the inconsiderate woman.

“To my Astoria neighbors if you see this woman stay far away. Also, since we are in a pandemic, this is by law considered #assault,” Goodbaum wrote.

Goodbaum added that she won’t be going back to that bagel shop, either, because they still served the maskless woman despite requiring masks of all customers.

The bagel shop, meanwhile, has publicly responded to the incident on Facebook, explaining that employees are told to “never” serve customers who aren’t wearing masks. However, they claimed that most of the staff on-duty were young, and allegedly very intimidated by the woman.

They also confirmed that this woman is now banned from all locations of the New York City Bagel and Coffee House.

“We will not serve anyone without a face mask or a face covering. We apologize for the horrific behavior of this woman," the bagel shop said.