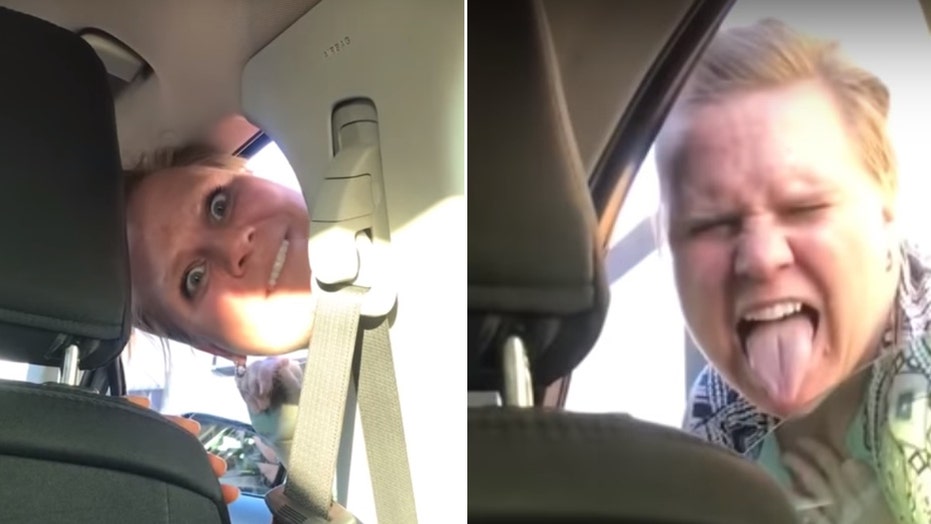 A New Jersey woman is “still processing” the dramatic moment when an enraged driver stuck her head in her car last week, spitting out a profanity-laced rant that's since gone viral and earned the angry woman the name “Kidz Bop Karen.”

Chelsea Klein, 29, was in a Lyft on New York City's West Side Highway when she observed a woman flipping off her driver, she told Fox News on Wednesday. Klein, unaware of the woman’s issue with her, responded with a thumbs up.

That’s when she said both cars pulled up to a red light and the woman got out of her vehicle and approached her car. Klein said the woman was upset that her driver cut her off but she became more enraged when Klein told her to “calm down.”

“You’re cute too,” she can be heard saying as the video begins.

The driver of the Lyft can be heard repeatedly apologizing as the angry woman looks into the camera and sticks her tongue out at Klein.

“She thinks it’s cute that her driver almost hit my kids and she thinks she needs to take a video of it instead of apologizing like a sane human,” she continued.

“So stopping in the middle of the road is going to help?” Klein asked rhetorically.

“You being a b---- is going to help?” the woman said sticking her head through the passenger side window.

As the driver continued to apologize to the angered woman, she fired back at Klein.

Klein told the woman to “set an example,” alluding to a child she saw in the car nearby.

Klein told Fox News that the whole encounter felt like it was out of a movie and she only began filming because she was genuinely worried about what the angry driver might do next.

“I didn’t know what was going to happen,” Klein said. “I was filming just in case of an emergency.”

She added: “I still haven’t processed it.”

Klein said that immediately after the video was posted by Barstool Sports, an Instagram account appearing to belong to “Karen” began attacking her physical appearance in the comment section.

Klein also received an email from the woman “congratulating me on my 15 minutes of fame,” adding that any money she’s made from the clip “was hers.”

“I haven’t made any money,” she said amusingly.

Klein told Fox News “she feels bad” for the woman and only shared the video after the fact because she thought it was funny.

She added: “I just took it as another wild New York encounter.”

The video of the incident has gone viral after being shared on Instagram, YouTube and Twitter, prompting amused users to recreate the moment on Tik Tok, another popular social media platform.