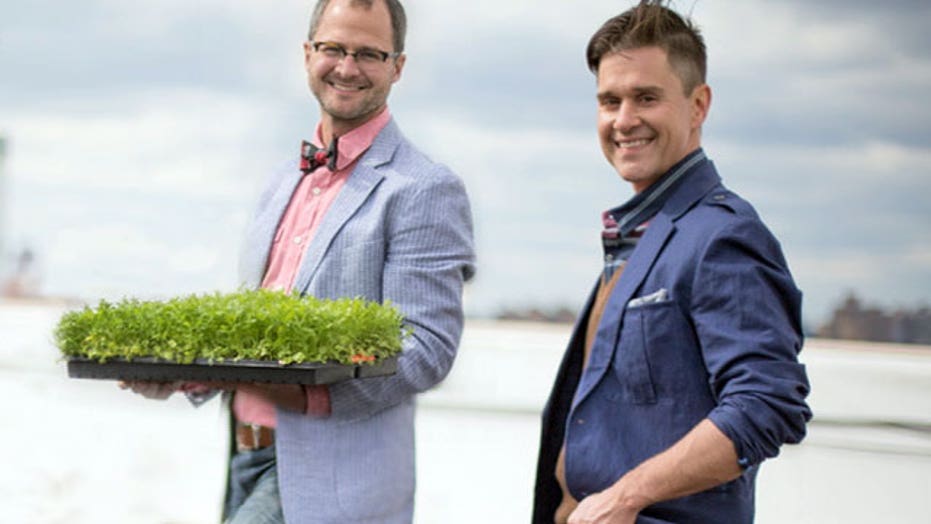 Visiting the farm of celebrity chef/culinary gurus the Beekman Boys.

Brent Ridge and Josh Kilmer-Purcell had a problem. They needed money fast, so they looked around for help. It turns out help was in their backyard: goats.

In 2006, these city slickers gone country bought the historic Beekman Mansion and 60-acre farm in Sharon Springs, N.Y. as a weekend getaway from New York City.

“We had to figure out how to make the farm a sustainable business."

At the time Kilmer-Purcell was an ad executive and Ridge a physician who worked for Martha Stewart.  But in 2008 they lost their jobs, leaving them with a big mortgage -- and a big problem.

“We had to figure out how to make the farm a sustainable business,” says Ridge.

That’s when their neighbor, John Hall, approached them looking for a place to keep his goats.  They made a deal with Hall and started producing soap from the goats’ milk.  The soap was a hit.

That was the start of their lifestyle brand, Beekman 1802, named after the year the farm was built.

Soon after, the Cooking Channel began documenting their new life as farmers in a reality show called the "Fabulous Beekman Boys," – that co-starred the goats and their pet llama, Polka Spot.

But what really eased their financial woes was when in 2102, they entered and won the $1million grand prize on the hit CBS show "Amazing Race.”

“I don’t’ think we would have done as well on the “Amazing Race” had we not had the recent experience of losing everything and starting over, and being resilient,” says Ridge.

Down the street from their sprawling farm is their flagship home store,  Beekman1802, which sells their trademark soap, a pasta sauce Mortgage Lifter (25 percent of the profits goes to small farmers to help them build their businesses), honey, and crafts made by local artisans.

“We started meeting our neighbors – who are these amazing artisans. There are blacksmiths and weavers and other food producers. We started this great collective under the Beekman 1802 collective,” says Ridge.

The two have managed to meld their urban sensibility and rural aesthetic in every aspect of the lifestyle category: food, beauty, clothing, garden, and home design.  They’ve published several successful cookbooks, and have a new one called The Beekman 1802 Heirloom Vegetable Cookbook-- celebrating the best of the backyard gardens.

They’ve partnered with the all-purpose boot company, The Original Muck Boot Company, to create the stylish MUCK B 1802 boot.  And this summer they are launching a furniture and bedding collection.

Ridge is proud of their rapidly growing brand.

“We have a profitable debt-free business and that is something we strove for because we were creating a business during the recession.”

If you want to take a closer look at their thriving empire, this month The Beekman Boys are hosting a farm tour.

So what’s next? Kilmer-Purcell assures us, there’s no slowing down.

“We want to continue to produce products that people feel are good products – not only in things that you like --but that are doing good in the world – that’s our mission,” he says.