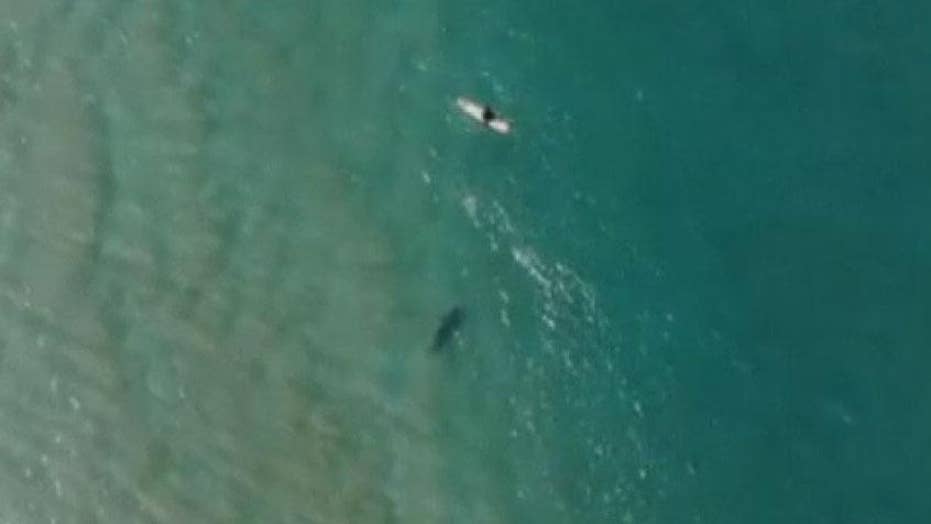 Raw video: A drone captures the moment a shark swims towards a surfer before swimming away.

An image of a dead blue shark recently being “paraded” before a crowd at a British seafood festival has sparked great debate, as the species is nearly threatened on a global scale.

Some critics of the photo declared the incident a “disgusting” disgrace to the local community, seeing as the species' numbers have dwindled worldwide. Others, meanwhile, claimed that it’s absurd to protest a deceased shark at such an event.

Ahead of the popular Plymouth Seafood Festival in Plymouth, England, on Sept. 14 and Sept. 15, a small blue shark was reportedly caught as a “bycatch” on Friday, Plymouth Live reports. A “bycatch” is defined as an unwanted marine creature being netted during commercial fishing excursions for different species, according to the Daily Mirror.

In the controversial image, two men hoisted and “paraded” the dead shark before festival attendees in the port city’s historic Barbican neighborhood, the Mirror reports. The picture was shared to the Instagram account of local tourism bureau Plymouth Live, complete with the caption, "We have a blue shark here today. Ben will be cooking it later on this evening.”

Though the image has since been deleted from the page, it has circulated on Twitter and Facebook, where it has since sparked outcry. Allegedly, the Plymouth City Council had given a local seafood restaurant, The Boathouse, control of their Instagram page as part of a guest “takeover” during the festival, during which reps for the establishment shared the offending image, the Mirror reports.

Though the city council has acknowledged they will be “reviewing” their social media policies and practices moving forward, the damage was already done. Many viewers were offended by the photo, with frenzied Facebook commenters debating whether or not the image was morally wrong.

“This is disgusting and Plymouth should be ashamed of itself!” one user cried.

“No respect was shown for the animal or its life,” another echoed.

Others, meanwhile, didn’t feel the picture was so problematic.

“No one would have batted an eyelid if it was just served to them on a plate… I don’t condone killing endangered species and sharks are really under threat, but if it was dead already why waste it?” one countered.

“What a load of [politically correct] madness, did we not do always do this, parade a catch before eating it?" another said.

“A fisherman at a seafood festival with a shark to eat... oh no!” one sarcastically remarked.

An image of a blue shark. According to International Union for the Conservation of Nature, the blue shark is "near threatened" on a global scale. Nevertheless, there are currently no limits on catching the species in the U.K (iStock)

According to International Union for the Conservation of Nature, the blue shark is "near threatened" on a global scale. Nevertheless, there are currently no limits on catching the species in the U.K., as per the Mirror.

One fierce critic of the image has emerged in the Ocean Conservation Trust, the operator of Plymouth's National Marine Aquarium, which is coincidentally famed for its work protecting sharks.

"As an Ocean conservation charity, we do not condone the eating of blue shark and were disappointed to see that a blue shark was shown off at the 'catch of the day' session, as well as being featured on the chef's stage," spokesperson Helen Gowans said.

"We were surprised and very disappointed that this year's event saw the inclusion of a shark which we understand was caught as by-catch at the 'catch of the day' session and was featured on the chef's stage by a contributing organization,” Gibson said, according to the Mirror. "We would not have allowed this to proceed if we had known in advance and we have already put measures in place to ensure this will not be allowed to happen again at any of our future events.”

"As Britain's Ocean City we are proud of our marine heritage and champion the conservation of our waters, the animals that live within them are extremely important to us,” she added. 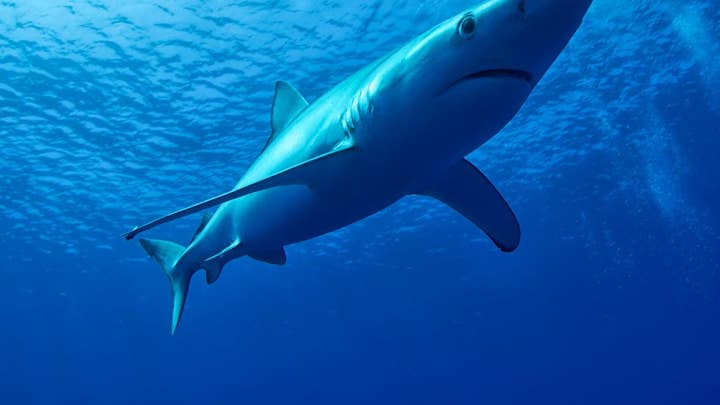 Reps for Visit Plymouth were not immediately available to offer further comment.

Meanwhile, the owner of The Boathouse restaurant and Plymouth Boat Trips said that the entire situation has been blown out of proportion and that the shark was “never paraded.”

"I didn't catch this shark but this is what [happened]. It was dead when it came aboard the boat,” Ben Squire told Plymouth Herald, sharing his side of the story.

Instead, Squire decided to bring the shark to the Plymouth Seafood Festival, where it would be auctioned for charity, benefitting the Fishermen's Mission to help families of anglers who have lost their lives at sea.

"I think I did a good thing with that shark. Instead of it being discarded or put as crab pot bait, I thought I was doing a good thing,” he said. "In terms of it being paraded, it certainly was not paraded around the Seafood Festival."

Nevertheless, Squire said he regrets that the image was posted on behalf of his business.