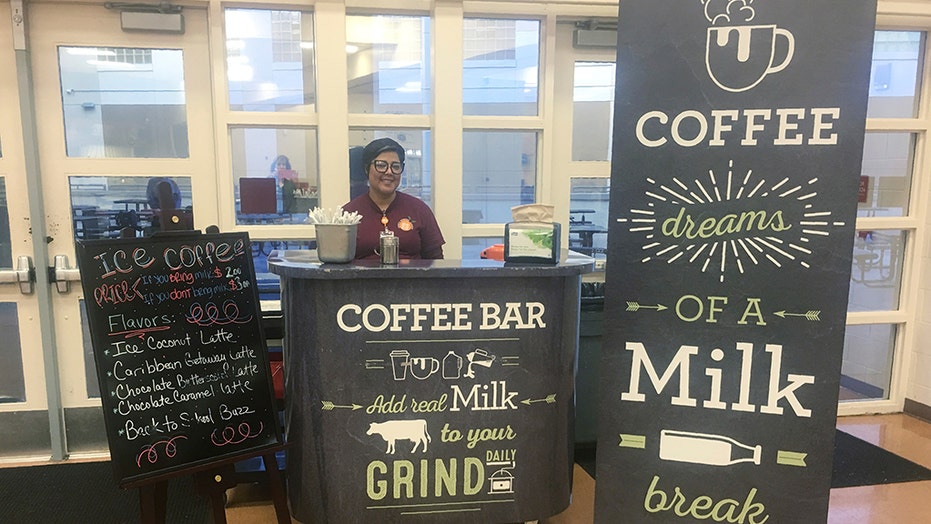 The U.S. dairy industry is setting up coffee bars in high schools across America as part of its fight against declining milk consumption.

At a high school in North Dakota, a $5,000 grant from a dairy group helped pay for an espresso machine that makes lattes with about 8 ounces of milk each. The drinks used 530 gallons of milk this year.

"We buy a lot of milk," said Lynelle Johnson, the food service director for the Williston Public School District.

In Florida, a dairy group said it paid for coffee carts in 21 high schools this past school year. Florida Dairy Farmers said the carts would allow students "that might not normally select milk with their school meals to consume milk."

For many in the dairy industry, getting people to drink the staple beverage has become a fight for economic survival. Per capita milk consumption fell 40 percent between 1975 and 2017 and the number of registered dairy herds in the United States fell by 2,731 between 2017 and 2018 according to the USDA — a 6.8 perent drop.

John Urbanchuk, a professor of agribusiness at Delaware Valley, said the decreased demand for milk is hurting farmers.

SLIGHT MAJORITY OF AMERICANS WOULD RATHER EAT PIZZA FOR BREAKFAST, SURVEY FINDS

"I was appalled when I looked at the numbers," he said. "Fluid milk consumption per capita is down by 9.7 percent in the last five years, ice cream consumption is down 3.3 percent. People are just not consuming milk, and it's putting the dairy industry in a bad place."

But while dairy groups look to lattes at lunch to get the next generation hooked on milk, the American Academy of Pediatrics is discouraging the idea. AAP spokeswoman Dr. Natalie Muth, a pediatrician, says caffeine consumption can lead to headaches, agitation and lack of sleep for students. She also says there are other ways to get the nutrients milk provides.

“If they’re going to be having that outside of school, that’s one thing. But in schools, the idea is to promote good health and nutrition,” she said

But Julie Ostrow of Midwest Dairy argues that milk is the primary ingredient in lattes, though the exact amount can vary.

"It's really milk with some coffee, as far as proportion," she said.

Midwest Dairy provides coffee bars at schools in Fort Zumwalt, Mo., in exchange for data on how much milk is used for the lattes and other dairy products in the cafeteria. But the group might not be happy about one of the newer options: This past year, the coffee bars began offering almond milk for 40 cents extra, said Paul Becker, the district's food director.