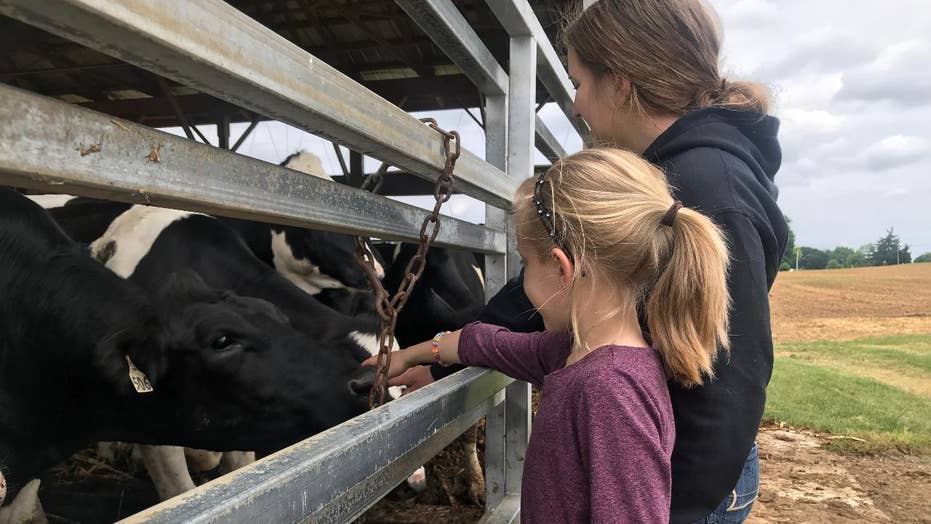 LEBANON, PA – Just three decades ago, America was a milk guzzling nation. About 247 pounds of milk was consumed every year.

But consumption dropped to 154 pounds in 2016, according to the United States Department of Agriculture.

And that is impacting dairy farms across the nation, which are struggling to survive as the industry slowly vanishes.

Alisha Risser and her husband bought a dairy farm in Lebanon, Penn. 15 years ago from his family. They wanted to pass it down to their children. But now their farm is under threat after the company that for years supplied their milk nationally abruptly nixed their contract.

The Rissers were among more than 100 dairy farms nationwide, and 41 in Pennsylvania, to have their contract canceled by Dean Foods. The company has said a surplus of raw milk and low demands left them with little options.

"In order to pay for our feed, vet services, and mortgage we need to sell our milk," Risser said. "If not, how can we operate and care for our livestock?"

Three decades ago, Americans drank 247 pounds of milk on average in one year, but by 2016, consumption dropped to 154 pounds per capita, according to the USDA (Fox News)

With fewer people drinking milk, the competition among producers has grown increasingly fierce.

The collapse of the dairy industry was brought on by a convergence of factors, including more milk substitutes on the market offering less fat and more flavor, the medical debate over milk's health value, and what economists call a classic case of an imbalance of supply and demand.

John Urbanchuk, a professor of agribusiness at Delaware Valley, said since the milk boom in 2014, prices have dropped rapidly. Milk is now selling for $15.30 per 100 pounds. In September 2014, it was over $25.

"I was appalled when I looked at the numbers. Fluid milk consumption per capita is down by 9.7 percent in the last five years, ice cream consumption is down 3.3 percent. People are just not consuming milk, and it's putting the dairy industry in bad place."

In the Keystone state, the nation's sixth-largest dairy producer, more farmers are liquidating assets, or worse, leaving the industry entirely. According to the Center for Dairy Excellence, there are 6,570 dairy farms in Pennsylvania, down by 80 from 2016, and by 800 since 2012.

At the Center for Dairy Excellence, a non -profit group created by the state to make dairy farming a more profitable and viable industry, more calls than ever are coming in for help. "These are frustrating times and many farmers are looking for an exit strategy," said Jayne Sebright, executive director at the center.

She said dairy farming is a global market and right now fluid milk sales have continued to drop across the world.

"In 2014, American farmers saw a boost from an unprecedented milk demand in China, which helped national exports," Sebright said.

According to Urbanchuk, there are other options for dairy farmers in New York, Michigan, Wisconsin, and Pennsylvania searching for an alternative cash flow.

"I'm not sure exiting is the best option," Urbanchuk said. "Farmers with good soil can produce other crops, which can provide an opportunity to remain in agriculture."

Rep. John Zimmerman, R-Lancaster, resides in the neighboring county and said Central Pennsylvania farmers are not looking for alternative crops. Dairy is all they know, he said.

The Rissers are grateful that they have a new deal. (Lebanon County) (Fox News)

"Pennsylvania farmers are competing with factor outside of the national crisis," Zimmerman said. "We have higher real estate cost, less processing plant, and smaller farm. Transitioning may not be an option for our farmers."

Risser, who has worked on farms since she was a young girl, said she understands the volatility of the market.

"You expect to have the highs and lows,” she said, “but what was different with this particular one is that the cost of producing milk has risen over the past couple of years."

The USDA said dairy farmers are getting paid 87 cents for every dollar they spend to produce.

As prices fall, farmers who remain have increased production to make up for losses. Urbanchuk calls it a "vicious cycle."

Many farmer advocacy groups have asked the government to intervene.

Zimmerman believes that is no longer an option.

"At one point, government even bought out herds, however, we don’t have the finances or the means to do that today," Zimmerman said.

Instead, Zimmerman hopes to restore the North American Free Trade (NAFTA) agreement to help restore stability in the dairy industry.  And bring whole milk back into schools across the U.S.

The Rissers are fortunate to have a new deal. In the region, four farms have already sold their cows due to the cancelation.

"Harrisburg bottling company, a small, local distributor was an answer to our prayers," said Risser.

He said the family-run farm is secure – for now. But does not know how long that will last.

"I still hope one day one of the kids will want to take on the farm," Risser said. "But after all the struggle we've been through, I want them to make that decision on their own."