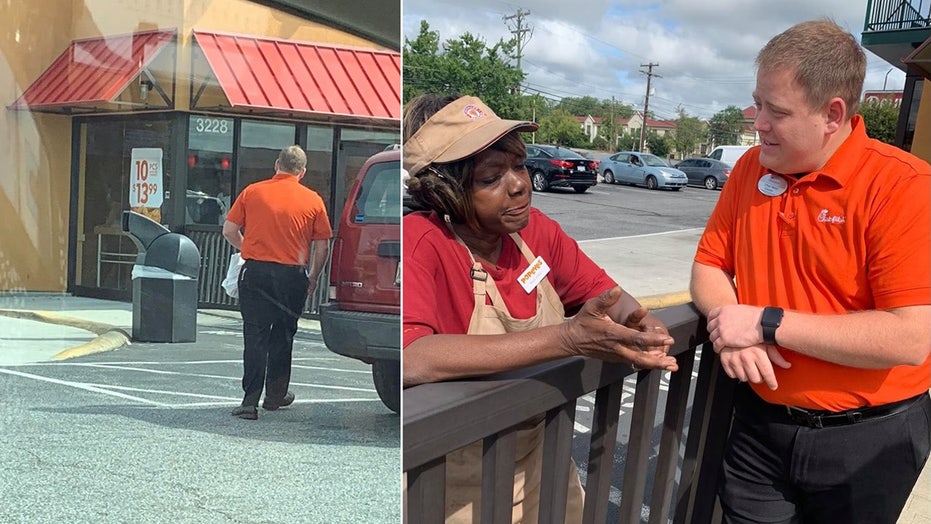 Popeyes may have started the viral "chicken war" but one Chick-fil-A location used their chicken sandwiches as a peace offering.

In the heat of the battle, a Popeyes in Greensboro, N.C., recently ran out of chicken sandwiches, and one Chick-fil-A employee from across the street walked over to hand out chicken sandwiches to the "stressed out" Popeyes workers.

The scene was caught on camera by a Chick-fil-A fan who was in line to try the competitor's new spicy chicken sandwich — and it turned into several funny memes, FOX 4 News reported.

POPEYES ANNOUNCES CHICKEN SANDWICH HAS SOLD OUT MONTH EARLY, EXPECTED TO BE GONE BY END OF WEEK

Jené Walker candidly shared on Facebook that she was in line at Popeyes when the Chick-fil-A director came across the street to give chicken sandwiches to Popeyes' employees and even offered to give customers a free chicken sandwich on him. She called it the "funniest, yet nicest thing" she'd ever seen.

Jené Walker captured a Chick-fil-A employee walking over to a nearby Popeyes and handing out free sandwiches to Popeyes employees. (Courtesy of Jené Walker)

The manager at the Chick-fil-A store said the man in the photo, Nick, has been friends with the Popeyes employees for a very long time and the workers will usually come over to Chick-fil-A for breakfast, but weren't able to since the launch of the spicy chicken sandwich Aug. 12.

"Chick-fil-A," Walker wrote. "I promise to NEVER cheat on you!! You've shown loyalty to me...even when I was about to be disloyal to y'all. I love y'all forever."

And, for the record, Walker told Fox News she has not tried Popeyes' new sandwich.

Walker's post has been shared over 17,000 times and spawned several memes.

One that has been shared over 80,000 times says: "Shirley, you come work for us and you can go to church on Sundays."

And Walker took her shot at one, too:

"Chick-fil-A:...But why y'all have to come after us? We stay in our lane. Popeyes: IDK, I just work here. I love y'all. I told them to go after McDonald's and Wendy's."