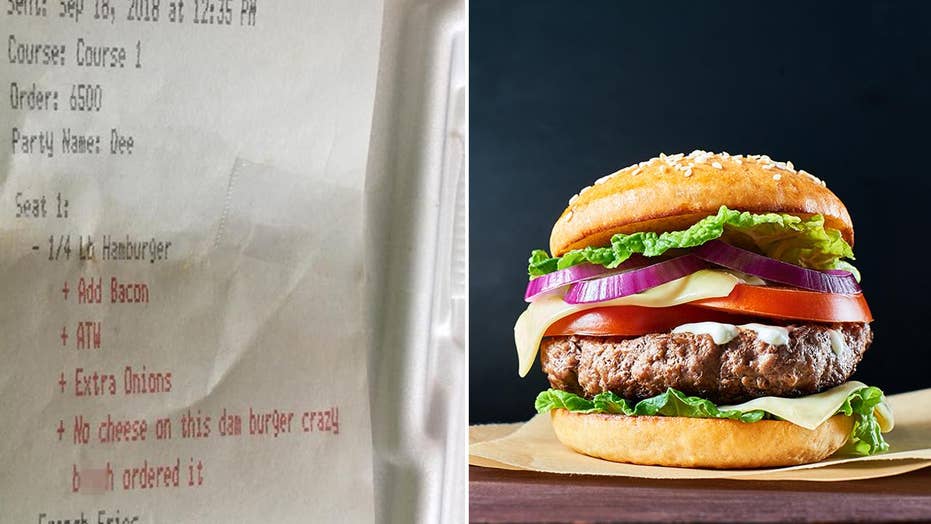 Woman claims restaurant called her 'crazy b----' on receipt

An Alabama woman claims she was shamed and called a 'crazy b----' on her receipt by a local fast-food restaurant when she tried to order a burger without cheese.

An Alabama woman claims she was shamed by a local fast-food restaurant when she tried to order a burger without cheese.

Jess, a regular at Henry’s Burgers and Cream in Brookwood, stopped by the local spot to pick up lunch for her co-workers Tuesday, one of whom is lactose-intolerant.

When she got back to the office with the food, she noticed the restaurant forgot to leave the cheese off her co-worker’s burger, so she called to have the order corrected.

In a post on Facebook, Jess explained she drove back to Henry’s to get the correct order, this time without cheese. That’s when she noticed the alleged comment left on the bottom of her receipt.

The message at the bottom of the receipt the customer claims came from Henry's reads: "No cheese on this dam burger crazy b---h ordered it.” (Facebook)

“No cheese on this dam burger crazy b---- ordered it,” the receipt reads in a photo shared by Jess.

The owner of the restaurant told ABC 30/40 that nothing like this has ever happened before and that the customer’s dairy allergy was not disclosed to the restaurant employees.

She also said she’s addressed the issue with the employee reportedly guilty of printing the remark and is in contact with Jess to resolve the situation.

Jess told Fox News the owner reached out to apologize, but then reportedly accused her of “starting a smear campaign” against Henry’s after refusing to remove the Facebook post.