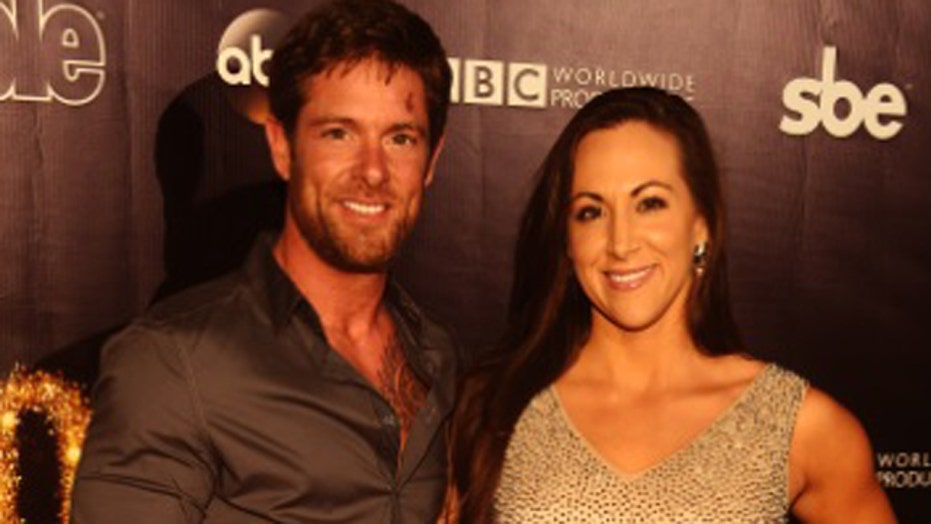 Double amputee war hero Noah Galloway thrilled his castmates and fans by proposing to his girlfriend on Monday night’s live broadcast of “Dancing with the Stars.”

And she said yes!

After Jamie Boyd, an Army Reserve specialist, told Galloway on camera after his dance that she was proud of him, he replied, “I’ve gotta do this here,” dropped to one knee, and gave her a diamond ring.

“Is that a yes?” hostess Erin Andrews asked.

“Heck, yes!” Boyd affirmed, jumping up and down as co-stars swamped them with hugs and congratulations.

After the show, Galloway, the army veteran who lost two limbs while fighting in Operation Iraqi Freedom in 2005, told reporters “From the day I met her, I knew this was going to be somebody that I was going to ask to marry me” -- and he said proposing on ‘DWTS’ just felt right.

“She surprised me [on] week two [of the show] by coming [here] from basic training. So much of our relationship has been shared with all these new followers that I’ve gained from ‘Dancing with the Stars’ so it made perfect sense to me to share this with the audience of the show,” he said.

Galloway, who has been married twice and has three children, told FOX411 he wants to walk down the aisle with Boyd because “she has a beautiful heart. She’s very childlike sometimes, but in a good way. She’s really made me a better person because of who she is and what she stands for.

“When we first started dating, she had this standard and I used to criticize her, and said, ‘You’ve watched too many movies, read too many books, that’s not real life.’ We would argue about that a lot. But as time went on, I realized because she had this standard, I rose to that and became a better person to make sure I could keep her. I didn’t want to lose her and I knew that if I didn’t step up my game, she would walk away.”

But Boyd didn’t -- and she told FOX411 she was “absolutely, positively surprised,” by the TV proposal. “I had no clue at all.”

Boyd, who wore a blush-colored gown with lace at the top that looked like it could be a wedding dress, laughed to reporters backstage, “Here’s the thing---he told me to go get a dress, they might ask you how you think I’ve done this season, give a little recap of how proud you are of me and I was, like, ‘I can do that, I’m ready!’ And so I’d gotten a dress, my nails done and everything and lo and behold, he pops the question. It was amazing, so special.”

Galloway, who has stunned “DWTS” viewers this season by performing with a prosthetic leg and one arm, said his pro partner Sharna Burgess was in on the proposal plot and recalled, “Sharna had the ring, was going to pass it to me ... Okay, how’s this going to go? I felt a nudge in my back from Sharna and I put my hand back, there was the ring. So it was everything was going step by step ‘til I was down on my knee.”

Meanwhile, his co-star Riker Lynch revealed to reporters, “I actually knew it was going to happen beforehand. Noah was talking to me about it.”

Afraid of blowing the secret, Lynch said, “I made sure I didn’t talk about it at all and then when it happened, I was so excited. Noah is such a great guy and I couldn’t be happier for him.”

And longtime “DWTS” Judge Carrie Ann Inaba was delighted to see her show’s very first live marriage proposal, telling FOX411 backstage, “That was a magical moment ... It just shows what kind of man he is. It was so nice he did it here on 'Dancing with the Stars,' with all of us.”