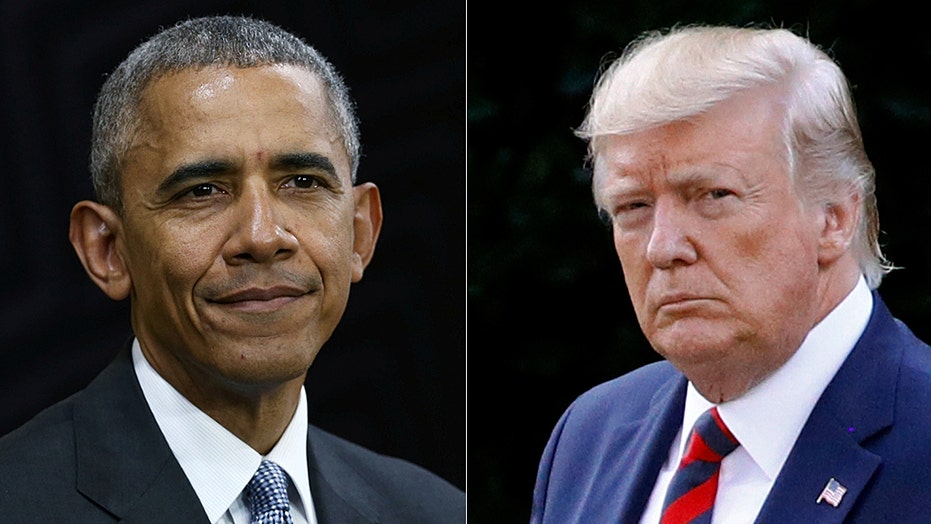 President Trump targeted both of Barack Obama's post-presidency deals in a series of tweets on Monday, calling for an investigation into the former president's book and Netflix projects.

"House Judiciary has given up on the Mueller Report, sadly for them after two years and $40,000,000 spent - ZERO COLLUSION, ZERO OBSTRUCTION," Trump tweeted. "So they say, OK, lets look at everything else, and all of the deals that 'Trump' has done over his lifetime. But it doesn’t....

"....work that way. I have a better idea," he continued. "Look at the Obama Book Deal, or the ridiculous Netflix deal. Then look at all the deals made by the Dems in Congress, the 'Congressional Slush Fund,' and lastly the IG Reports. Take a look at them. Those investigations would be over FAST!"

A few hours later, Trump continued his Twitter tirade, writing: "They failed on the Mueller Report, they failed on Robert Mueller’s testimony, they failed on everything else, so now the Democrats are trying to build a case that I enrich myself by being President. Good idea, except I will, and have always expected to, lose BILLIONS of DOLLARS.....for the privilege of being your President - and doing the best job that has been done in many decades," he added. "I am far beyond somebody paying for a hotel room for the evening, or filling up a gas tank at an airport I do not own. These Radical Left Democrats are CRAZY! Obama Netflix?"

In April, the former president and Michelle Obama revealed the initial projects their production company, Higher Ground Productions, would be releasing as part of a new partnership with Netflix.

Spearheaded by Priya Swaminathan and Tonia Davis, the Obamas launched Higher Ground last spring in an effort to produce a diverse mix of content, which includes a scripted series, an unscripted series, a docu-series, as well as documentaries and features, according to a previous press release from the streaming giant, which announced the multi-year agreement.

And in 2017, it was revealed that the Obamas secured book deals with Penguin Random House. The former first lady's memoir "Becoming" -- which was published last year -- has already received a $65 million book advance. Meanwhile, it's been reported that Barack's memoir won't be released until next year.

Many social media users immediately reacted to Trump's tweets, stating that Obama "can make any deal he wants to make money."

"President Obama and former First Lady Michelle Obama are private citizens entitled to enjoy their success. (And, both are very fine authors.) It’s the American dream," said another individual.

MICHELLE OBAMA'S 'BECOMING' MAY BE BEST-SELLING MEMOIR EVER