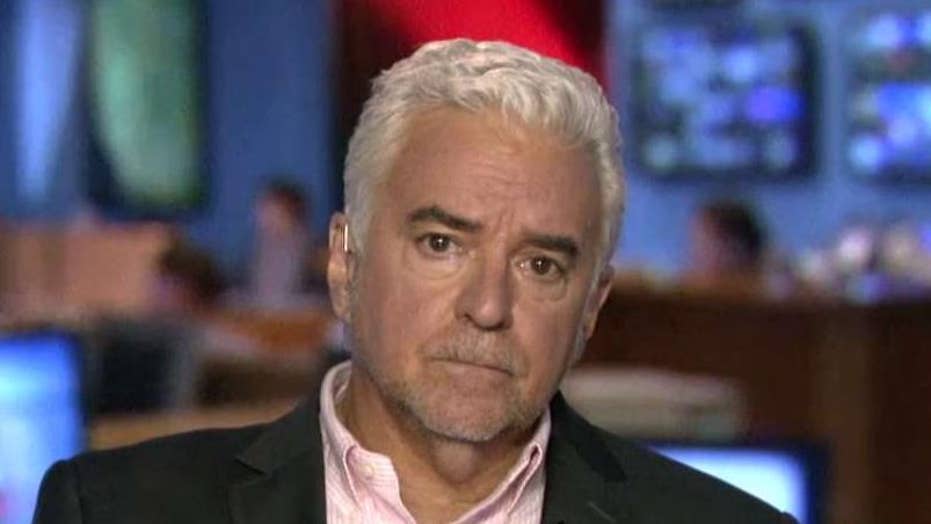 'Will and Grace' stars call for list of attendees to a Trump fundraiser in Beverly Hills on same week as the Emmy Awards; reaction from actor John O'Hurley.

“Seinfeld” actor John O’Hurley sounded off on Hollywood for suppressing “diversity of thought” in the wake of Debra Messing and Eric McCormack calling for supporters of President Trump to be outed.

Trump plans to attend a Sept. 17 fundraiser in Beverly Hills during a trip to California that will also include visits to the San Francisco Bay Area and San Diego, officials said. The “Will & Grace” co-stars took issue with a Trump fundraiser happening in their city and called for donors to be doxxed.

“I think they have the bully pulpit right now to say it out loud. I don’t think it permeates Hollywood to the degree that you think it is,” O’Hurley said on “America’s News HQ” Monday. “I think there is a nature among liberal thinkers to form packs, to form groups, whereas the conservative mind is basically an individual, and they’re tougher to find.”

As for Messing and McCormack’s tweets, the former “Seinfeld” star described them as “lunacy.”

“Let me just say I’m embarrassed for both of them because I know them both, I’ve worked with Debra before. They’re both smart people... they do wonderful work,” he explained. “But, they’re pushing a case that falls apart from the sheer weight of its lunacy, as though the Hollywood community needs to be purged of this social and intellectual hygiene problem called conservative thinking. It underscores the fact that we aren’t receptive to a diversity of thought which is the exact opposite of what you feel the liberal way would be, and I find that obscene.”

The star, an outspoken conservative, went on to explain that he personally relished the opportunity to discuss differences of thought with fellow actors, naming two of his former co-stars as an example.

“It’s very difficult to be a conservative in Hollywood. Even though there are many of us, you do feel you are an island fighting the storm... all viewpoints must be observed and respected,” he shared. “At the same time we are supporting free thinking, we also have to support free receptors – people that will allow other ideas to infect them. Some of the best convos I’ve ever had on 'Seinfeld'... were with Michael Richards who thinks totally different than I do. I couldn't wait to present him with an issue because I was always interested in his perspective.”

O’Hurley continued: “Bryan Cranston... is the complete opposite of me. We can sit for hours and discuss an idea... not with the premise of trying to convince each other.”

This isn’t the first time that the O’Hurley has discussed the difficulties of being a conservative in show business. He previously appeared on “Fox & Friends” in 2017 to discuss the issue.

“Every time I have mentioned that I supported Trump in this election, people get vicariously angry at me, and they don't believe that it's possible that someone might think differently than they do," O'Hurley said at the time. “There is a band of conservatism in Hollywood, but it leans so much to one side that it doesn't allow for free discussion.”