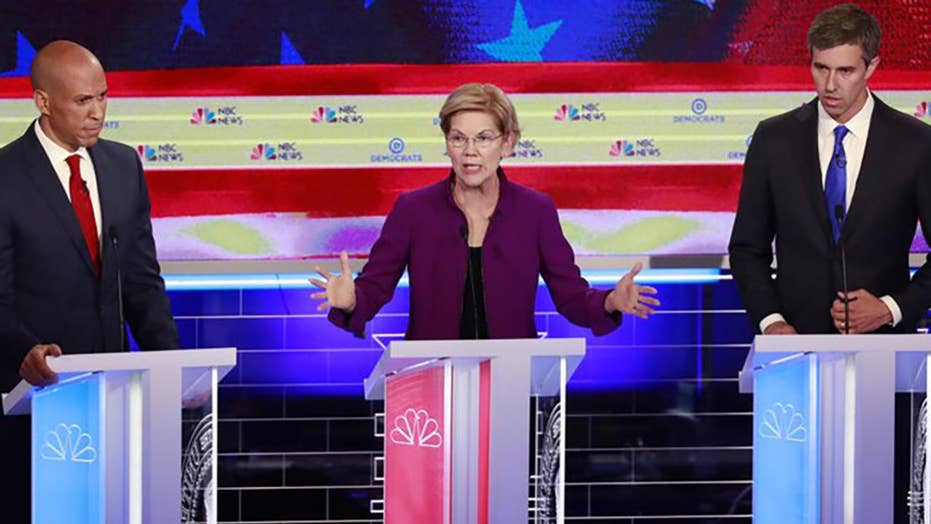 Former acting ICE director Tom Homan reacts to what the candidates had to say.

"Morning Joe" host Joe Scarborough said it was “a missed opportunity” for Democrats in the first 2020 debate to not go after Joe Biden or President Trump.

“On the first night, they didn't go after Joe Biden. When you're sitting with 42-43 percent in the early states and they are not attacking you, that's an interesting dynamic,” Scarborough said Thursday morning.

“Also for Americans, this election is about one thing. It's about one man. It's about Donald Trump,” the MSNBC host added, before pointing to his political career as an example.

"It was just a little congressional seat, but when I ran in 1994, we had 11 people in the field and I was the underdog. I never talked about one of them. I stayed laser-focused on Bill Clinton,” he said.

Scarborough went on to criticize the 2020 Democrats for embracing the “very unpopular” 'Medicare-for-all' policy, saying the Trump campaign will use it to attack during the general election.

"If you want the Democrats to defeat Donald Trump, I'm very concerned by people casually embracing Medicare for all. When you drill down into that issue even among Democrats and start telling people what that means for them – suddenly it becomes very unpopular."

“If you want the Democrats to defeat Donald Trump, I'm very concerned by people casually embracing Medicare-for- all. When you drill down into that issue even among Democrats and start telling people what that means for them – suddenly it becomes very unpopular,” he said.

“That's something I promise you Donald Trump and his team, they already have the quotes from last night. If any of those people are nominees, they will go there tonight,” he added.

“I don't understand why this Democratic field doesn't say we passed ObamaCare – that was a remarkable achievement – let's mend it, not end it. Let's keep going in that direction because ObamaCare is extraordinary popular now because of Donald Trump.”