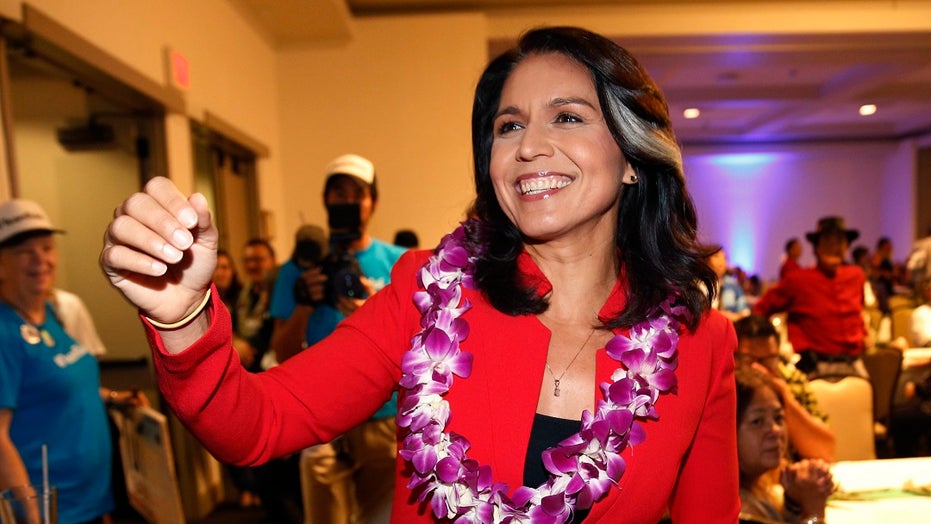 Former acting ICE director Tom Homan reacts to what the candidates had to say.

Rep. Tulsi Gabbard, a relative unknown mired at the bottom of the crowded Democratic 2020 presidential field, was the most searched candidate on Google by the time Wednesday's debate ended, making the Hawaii lawmaker and military veteran one of the night's biggest winners.

Google Trends data show prior to the debate, Gabbard was the most searched only in her home state, while Sen. Elizabeth Warren, D-Mass., dominated the country’s internet browsers.

That changed when the debate was over, with Gabbard being the most searched candidate on Google in most states, with Sen. Cory Booker, D-N.J., in a distant second.

Gabbard, an Army National Guard veteran who served in Iraq, grabbed the attention of the viewers every time she spoke about foreign policy and the military.

During the debate, she called for scaling back of U.S. military presence abroad and accused “this president and his chickenhawk cabinet have led us to the brink of war with Iran.”

Gabbard's military experience gave her authority in a harsh exchange with Ohio Rep. Tim Ryan, who said the U.S. must maintain forces in Afghanistan to ensure the Taliban is kept in check.

"When we weren't in there, they started flying planes into our buildings," Ryan said.

The data shows the moment which generated the most search traffic for Gabbard was when she was making her closing argument.

The Hawaii congresswoman’s performance at the debate was praised by even some unlikely media figures, including Meghan McCain, a co-host of “The View,” who said she was the most “composed and “authentic.”

“Tulsi and I literally couldn’t disagree on more (and she fundraised off of my name for calling her out on her relationship with Assad) BUT so far she’s coming across the most composed and authentic,” McCain wrote.

“It's clear who MSNBC wants to be president: Elizabeth Warren. They're giving her more time than all the other candidates combined. They aren't giving any time to Tulsi at all,” the sister tweeted from the official Gabbard’s account.

Gabbard is a four-term congresswoman whose opposition to foreign wars is the central theme of her political campaign. She served in combat zones in Iraq between 2004 and 2005 and was later deployed to Kuwait.

Her campaign has been hovering between 3 and 1 percent, though she’s enjoying the support of more progressive anti-war Democrats.

She’s been criticized over her past anti-LGBT rhetoric she made when she worked for an anti-gay group years ago. She has since condemned the comments and said they were “wrong” and “hurtful” and claimed, “my views have changed significantly since then.”

She also continues to face criticism from foreign policy hawks over her meeting with Syrian dictator Bashar al-Assad two years ago while on a “fact-finding” mission to Syria.