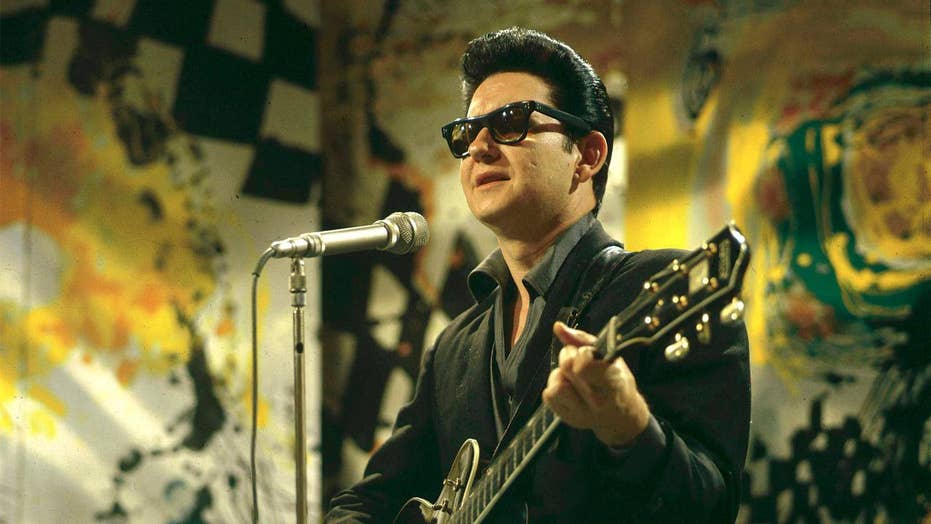 Roy Orbison’s son Alex Orbison says he cried after seeing his late father’s hologram for the first time on tour.

Alex Orbison cried when he saw the image of his father performing on stage — nearly 30 years after his passing.

Roy Orbison, the iconic rock ’n’ roll crooner who provided the title inspiration for 1990’s “Pretty Woman” starring Julia Roberts and Richard Gere, passed away in 1988 at age 52 from a heart attack.

And now the beloved ‘60s singer is being resurrected to hit the road once more through the magic of hologram technology. The estate-approved hologram tour kicked off in Europe earlier this year and next month will begin a 28-date run across the U.S. and Canada.

The shows pair the artist's hologram with live orchestration and newly recorded, digitally remastered arrangements of his classics.

Orbison, 43, told Fox News the likeness is so uncanny he quickly became emotional when he first saw it, especially after he witnessed other families bonding over the songs he grew up listening to.

“For the first show, I was holding in my breath and wanted everything to be perfect,” he said. “When people started clapping at the end of ‘Only the Lonely’ and going into ‘Crying,’ I started seeing these tender family moments and then another couple.

"You could tell, the couple, it was their favorite song because their hands floated up and they held each other’s hands as the song went in. And then they gave each other this look. That part of it touched me.

“I just started crying being so proud of what my dad accomplished in his songs… and that incredible voice. And the fact that people were seeing it in real time. It’s overwhelming and just very touching.”

Orbison is aware some fans of his father’s will be hesitant to catch some of the new performances, alleging it’s morbid or simply not the same. However, Orbison said the tour was carefully created to ensure it honored the late star’s lasting legacy in music.

“Being able to see a visual representation of an artist like my dad… and hearing his vocals plunked through a big theater or arena, it’s a powerful experience and even the most ardent fans… wanting to be skeptic, go to the shows and end up coming away loving them,” he explained.

“It’s truly amazing to see 30 years after my dad passed away, to be able to go see a Roy Orbison show,” he added. “At the end of the day, the people that have been going have been people that miss seeing my dad live or saw him and want to see him one more time. It is truly magical that we could be able to do that.”

Brian Becker, BASE Hologram CEO, told Fox News he worked with the Orbison family to ensure that Orbison’s likeness and movements were accurately portrayed. Becker said the process was a nerve-racking one.

“We had to get Alex [and his family] to make sure that it was authentic and properly interpreted,” said Becker. “There are fans, of course, and there are others who are involved in maintaining Roy’s legacy, but first and foremost was the family. So, we knew that if we could creatively satisfy them, that we would be able to bring the show to people around the world.

"I think we did well with that pressure. I think we satisfied the family. It was very collaborative… Every step of the way, Alex and his family assured that we had authenticity and that we treated his father properly.”

And there was plenty of reasons for Becker and his team to break a sweat. As one of the most legendary artists in American music history, Roy’s dark emotional ballads and impassioned voice resulted in 22 of his songs being placed on the Billboard Top 40 between 1960 and 1964 alone.

He would also go on to inspire Elvis Presley and Bruce Springsteen.

Little was known about his personal life, as Roy fiercely protected his family when not on the road, but the larger than life Texan did endure several private tragedies in his lifetime.

In 1966, his first wife Claudette Orbison, who reportedly inspired 1965’s “Oh, Pretty Woman,” was killed in a motorcycle accident with Roy riding just ahead of her.

Two years later, a fire destroyed his home in Hendersonville, Tenn., killing two of his three children at the time.

Orbison – who is one of two sons born later, during Roy's second marriage – revealed that when not performing, the leather-clad singer with the slicked-back pompadour was a doting parent.

“My dad was a great father at home,” he recalled. “The one thing that people don’t really realize about my dad was he was so funny. We would sit around and watch a lot of comedies.

"As a musician, you have a lot of time in between shows when you’re traveling and my dad spent a lot of that watching comedy… He had this quick wit where he could drop one-liners and his commentary was very funny. He really was a great dad.

“[He] enjoyed building model planes… His sons were all musicians, so he would help us along and give us hints and direction… It’s been really amazing to bring it all together with the hologram and for other people to enjoy our father, too.”

Orbison was determined to ensure his father’s hologram featured his signature dark sunglasses, a look he acquired in 1963.

“… One week later, he went on tour with an unknown band at the time in the states, and that band was The Beatles. So, he was playing shows with The Beatles and by the time he had played two weeks’ worth of shows with the sunglasses… he said the kids were looking for the guy in the sunglasses. So, the sunglasses stayed with him.”

When asked why he was compelled to launch the hologram tour now, Orbison proudly declared “there’s no time like the present.” He also pointed out that there’s no denying Roy’s music continues to be heard today. Artists, such as Don McLean, Van Halen and Linda Ronstadt are just a few of several artists who have re-recorded their takes on Roy’s hit singles over the years.

Orbison said it’s been bittersweet to witness the magic behind his father’s music on stage again.

“For me, aside from being his youngest son, I’m also one of the biggest Roy Orbison fans ever,” he said. “One of those things that I’ve missed the most is the excitement to be able to go see a Roy Orbison show. We’re just truly thrilled. My dad would say, ‘I’m just tickled.’”