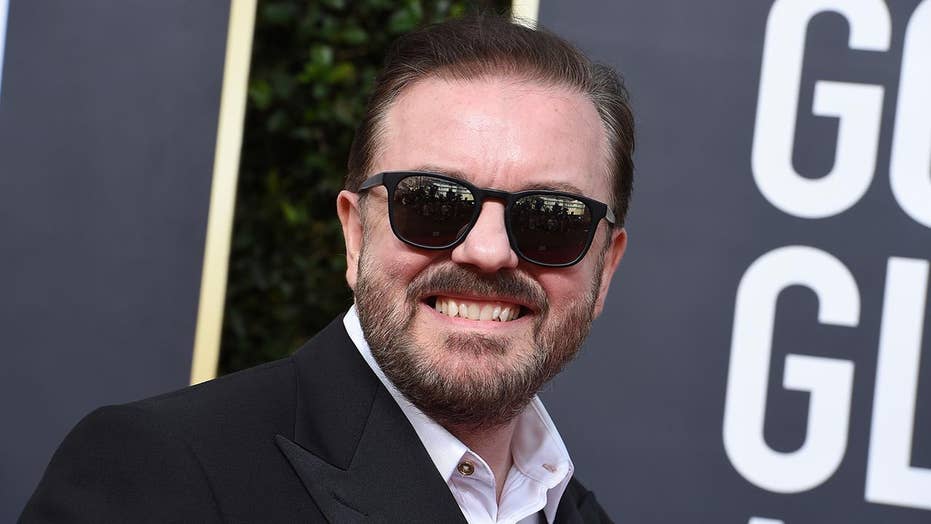 Gervais trashed after calling out Hollywood hypocrisy; reaction on 'The Five.'

Ricky Gervais mocked critics of his Golden Globes performance on Wednesday, saying that “simply pointing out whether someone is left or right wing” isn't enough to win an argument and that being offended doesn't make someone correct.

Many prominent conservatives, including Donald Trump Jr., took to Twitter to praise Gervais while many liberals blasted the monologue that slammed Hollywood elite.

Gervais tweeted four points aimed at people who didn’t appreciate his routine, noting that a good joke can be enjoyed by people on both sides of the political spectrum.

The notoriously non-nonsense Golden Globes host wasted no time making headlines on Sunday evening when he called out the many stars in the room for their relationships to large corporations, like Apple, Amazon and Disney.

“If ISIS had a streaming service you would be calling your agents,” he joked.

Gervais mocked Hollywood over now-disgraced mogul Harvey Weinstein, joked that people in attendance were friends with Jeffrey Epstein and told movie executives that they were terrified of #MeToo champion and award-winning journalist Ronan Farrow. Gervais also took jabs at the likes of Felicity Huffman and Leonardo DiCaprio.

"You all look lovely all dolled up, you came here in your limos. I came here in a limo and the license plate was made by Felicity Huffman," he said to the crowd who cringed. "It’s her daughter I feel sorry for. That must be the most embarrassing thing that ever happened to her. And her dad was in 'Wild Hogs,' so..."

He concluded his scathing monologue by warning the celebrities not to make any political or "woke" statements when accepting their awards.

"You’re in no position to lecture the public about anything," he declared. "You know nothing about the real world. Most of you spent less time in school than Greta Thunberg."

On Tuesday, Gervais questioned why some are labeling his opening monologue "right wing" in a separate tweet.

“How the f--k can teasing huge corporations, and the richest, most privileged people in the world be considered right wing?” Gervais asked his 13.9 million Twitter followers.