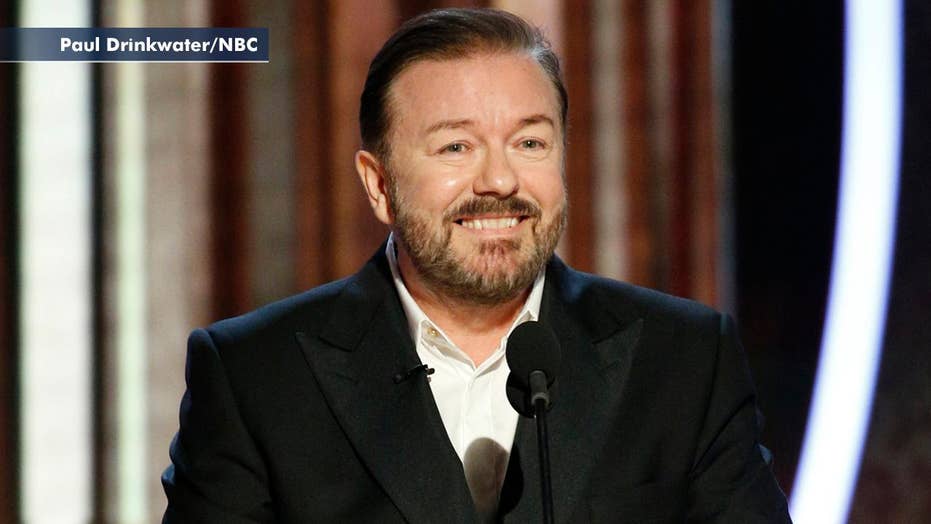 Ricky Gervais has been largely hailed for Sunday night's Golden Globes performance, but the comedian wonders why some are labeling his opening monologue "right wing."

“How the f--k can teasing huge corporations, and the richest, most privileged people in the world be considered right wing?” Gervais asked his 13.9 million Twitter followers.

The notoriously controversial host wasted no time making headlines on Sunday evening, laying into the Hollywood elite vying for a big win. He called out the many stars in the room for their relationships to large corporations, like Apple, Amazon and Disney.

Gervais mocked Hollywood over now-disgraced mogul Harvey Weinstein, joked that people in attendance were friends with Jeffrey Epstein and told movie executives that they were terrified of #MeToo champion and award-winning journalist Ronan Farrow.

Gervais also took jabs at the likes of Felicity Huffman and Leonardo DiCaprio.

He concluded his scathing monologue by warning the celebrities not to make any political or "woke" statements when accepting their awards. "You’re in no position to lecture the public about anything," he declared. "You know nothing about the real world. Most of you spent less time in school than Greta Thunberg."

Many prominent conservatives, including Donald Trump Jr., took to Twitter to praise Gervais for the routine that appealed to viewers at home, as opposed to the celebrities in attendance.

In a separate tweet on Monday, Gervais also responded to a news article which stated that "Golden Globes viewers want Ricky Gervais to host ‘every year.'"

"Never gonna happen," he replied along with a laughing emoji.

Meanwhile, Gervais did not get the warmest reception from the mainstream media. The Washington Post offered a scathing review of Gervais' performance, declaring that "nobody cared" about his barbs against the A-listers in Tinseltown in its headline.

Hank Stuever, the Washington Post's TV critic, claimed Gervais' monologue was filled with "all-too-easy digs" at Felicity Huffman, Joe Pesci, Leonardo DiCaprio and Judy Dench. However, he complimented the comedian's "best work," praising his "brutally blunt twist on his faux disdain for Hollywood and the Industry."